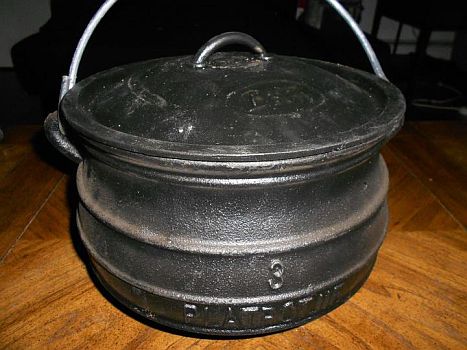 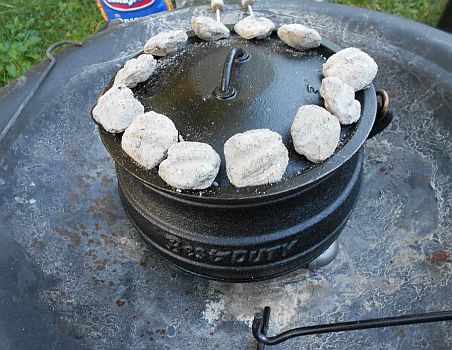 This is a South African potjie, a "size 3" cast iron pot (7.8 liters, or 8.25 quarts). (Apparently it's pronounced "poy-key.") I've been wanting one of these ever since I learned about them last year, and I saved up my pennies and found a decent deal on Amazon; there was no free shipping, but there was a dealer in Texas who supplied these pots. The lid is just under 10 inches: it fits on top of the Lodge 5-quart dutch oven, but it's a bit loose fitting there; it fights well on the potjie itself.. At its widest it's about 11 inches. It's actually a very rough casting, cast in two halves. There's a gate mark on the bottom of the pot, but this is definitely of modern make and not antique. Folks who like smooth cast iron would be disappointed with it. But it does have some distinct advantages, including its height (8 inches). It's deep enough to be a good deep fryer; I used it to deep fry a whole chicken back on Mother's Day. (Also, its similarity in look to a medieval-style cast iron cauldron makes the potjie quite popular among the New Age and Wiccan crowds – take a trip to Salem, Massachusetts in October and you'll see one of these in nearly every witchy-themed store there.) It's imported from South Africa, which gives it a $100 price tag. And to be honest, that makes it overpriced. Although the chances of you coming across a decent sized potjie at used price are very, very small, I would only advice getting one of these if you really want the luxury and novelty of owning a cast iron pot that's out of the ordinary. If you just want a big 8-quart cast iron pot, go for a Lodge camp oven, which sells for about $65 on Amazon.

Having made the effort to acquire a potjie, however, has given me time to get used to it. I'm quite fond of it, because it makes a great show piece and conversation starter. Also, it's a fully functional 8-liter cast iron cooking pot – which means that you can cook a lot of wonderful food in it.

As an April Fool's joke, I also used the potjie pot in this video especially because of its resemblance to a "witch's cauldron:" Shocking Evidence Revealed - The Cult of Cast Iron