or: an American Imitation of British Steak And Kidney Pudding

I fell in love with cooking (especially cooking in cast iron) in December of 2010. I've spent the past couple of years since then exploring and trying many kinds of cooking styles, exotic and ethnic dishes and spices; and I've tried a lot of new foods that I loved, and a few I did not. One kind of food that I've found appealing, and have made several times, is the steamed British pudding: a heavy pastry dish steamed over boiling water for four hours or more, with ingredients ranging from fruit (Christmas Plum Pudding) to meat. In early 2012, I found myself smitten with the urge to try a dish that's about as "British" as you can get: steak and kidney pudding. Cooked with a mixture of beef and beef kidney, surrounded by an outer shell of pastry in the purest British tradition, and steamed over boiling water for a full four hours, I wanted to try this for myself. I went looking high and low through the streets of Boston for a restaurant or "pub" that served this dish, and had no success…so I decided to cook one myself. I found a recipe for steak and kidney pudding and followed it to the letter, using suet in the pastry and even obtaining raw kidney. I spent a long time attempting to prepare the kidney, and finding myself overwhelmed by the stench of ammonia it gave off as I attempted to cook it. Finally, the pudding was finished…and I couldn't eat it. The most I was able to force myself to consume was one bite. I simply could not stomach the taste of the kidney, nor the odor. This truly was an acquired taste, one that I was not interested in acquiring now that I'd sampled it. 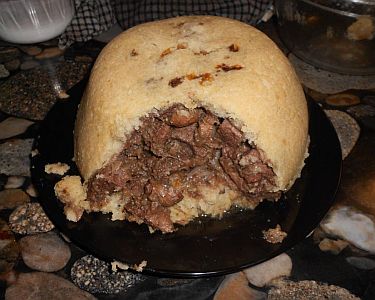 However, this did not quench my urge to have a British style meat pudding. I decided that if I don't like kidney, well, then I don't have to include kidney in the dish. So later in 2012, I made another attempt at steaming a British pudding. However, by this time I wanted to try another substitution, namely the suet in the pastry shell. Suet is hardened beef fat. Traditionally, suet has been an ingredient in northern European and British dishes since the medieval "dayse of olde." It's not pretty, but it gives a consistency and flavor to pies and puddings that can't be found elsewhere. Outside of Olde England, however, suet may be hard to find in many places. The question often comes up: "What can I use in my dish as a substitute for suet?" The response from most culinary professionals has been to turn their nose up and say, "There is no substitute for suet." Some recipes suggest using vegetable shortening or frozen unsalted butter as alternatives to suet, though this usually gives the pie a greasy taste rather than the rich flavor you can get from suet.

I'm fortunate to have access to suet here in New England, but it's likely that many of the persons reading this will be unable to acquire it. If suet cannot be had in your area, there is really no alternative but to cobble together a substitute. And from this, I've put together a faux suet recipe may not be perfect, but it should suffice. These two major substitutions are enough to classify this dish as something quite different from British steak and kidney pudding. That's why I've named it American meat pudding: it's a steamed pudding in the British style, but in typical American fashion it's been changed in order to make it more accessible and palatable for an American audience.

Pans needed: Large stock pot with lid for steaming, 2-1/2 quart glass baking dish for the pudding. A steaming basket or small stainless steel rack is also needed for resting the pudding above the level of the boiling water.

Cut the beef into 1-inch pieces. Cut the pork into small pieces. Place them both in a bowl and mix in nutmeg, flour, salt and pepper. Add onion, parsley, thyme and bay leaves.

For the pastry, mix the butter, shortening, bacon fat, and eggs together in a large bowl to form a paste. Add flour, salt, and baking soda to form a soft dough. The dough will have a very moist, clay-like consistency, more spongy than you would find with a typical pie dough. Knead on a floured surface. Take roughly a quarter of the dough for your lid and set aside. Place the remaining dough into your pudding basin or tin, and press the dough all along the surface of the inside of the bowl until the dough completely covers the inside, all the way up to the upper rim of the bowl.

Spoon the meat mixture into the basin, add the Worcestershire sauce, and add enough beef stock to come three-quarters of the way up the meat.

Press the extra pastry dough into a circle about 1cm larger than the top of the basin. Press the dough circle firmly onto the top of the pudding, and crimp the edges together to make a good seal.

Pudding cloths and cheesecloth are not commonly found outside of Britain, so we need to use another substitution: cover the basin with aluminum foil, and tie tight in place with string.

Place your trivet or steaming basket into the large stock pot, and cover with about 2 to 3 inches of water. Bring to a boil. Once boiling, lower the heat so the water is gently rolling. Put the pudding into the saucepan and cover with a lid, making sure no steam is escaping. Steam for 4 hours. You'll need to top the water up from time to time when it gets low.

Uncover the pudding by placing a plate on top of the basin, and turn the entire setup (plate and pudding bowl) turn upside down carefully to release the pudding from the basin. Serve with steamed cabbage and boiled potatoes.