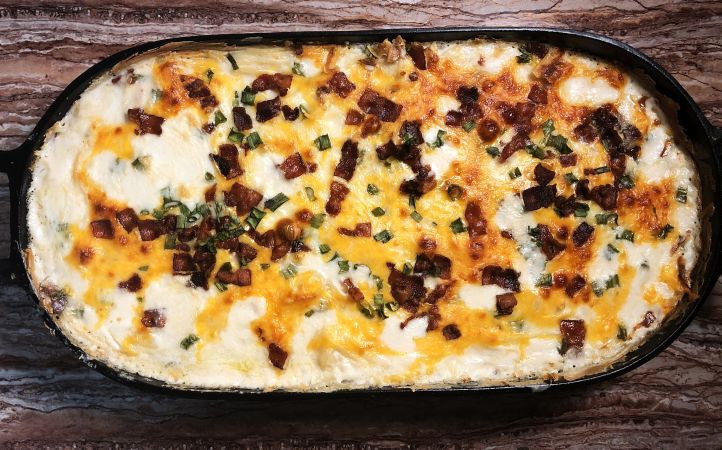 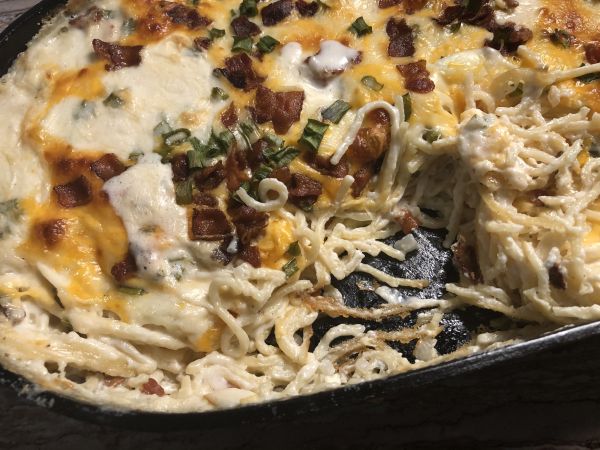 Pans needed: A large cast iron skillet or dutch oven for baking this dish. This pan should be wide with a lot of surface space, to allow the pasta to bake in the oven. A 12-inch cast iron skillet should work, or even a 9 x 13 inch baking dish. (The pan seen in these photos is a Birmingham Stove & Range Sportsman fish fryer, dating anywhere between the 1930s to the 1960s. After that they changed the design to what we would call an "oval roaster" today.) A stock pot for boiling water and partially cooking the spaghetti (see below). A whisk for preparing the roux, and a large wooden stirring spoon.

Heat a large cast iron pan for about 5 to 10 minutes on medium, and cook bacon to a crisp. (Reserve the bacon grease for later cooking.) Crumble the bacon, to mix in and top the dish.

In a stock pot, salt and boil water, and add spaghetti. Cook the spaghetti only enough so that it's soft and pliable, not stiff. The pasta does not need to be fully cooked, because we'll be cooking it later in the white sauce. When you drain the pasta, keep (reserve) at least 1 cup of the water used to cook the pasta. This can be added to the pasta later, to help thin the cheese sauce and make it moist. (Starchy pasta water is like gold! Don't throw it all out when cooking pasta.)

Add 1 and 1/2 teaspoons of salt and 1/2 teaspoon pepper to the white sauce. (This is a lot of sauce – don't worry, that's not too much salt.) Add spaghetti to the sauce. Reduce the heat to medium-low and leave the spaghetti to continue cooking for 8 minutes, stirring occasionally, until the pasta is cooked. (Cooking the spaghetti in the sauce, rather than fully cooking it in boiling water, will help the pasta to absorb the flavor of the sauce.) Stir in chopped garlic and onion, 2 ounces of the crumbled bacon, and 8 ounces cream cheese. Stir until cream cheese is melted and everything is blended. If the cheese sauce is too thick or dry, add some of the reserved pasta water and mix it together. This will help to give the cheese sauce a good consistency and keep it from becoming to thick.

Top the dish with shredded cheddar and mozzarella cheese. Sprinkle the remaining crumbled bacon over the top. Add chopped chives to the top.

Place the dish in the oven and bake for about 15 minutes, until the cheese on top is completely melted and just starting to brown around the edges.

Remove the dish from the oven and it to rest a few minutes before serving.

Based upon a recipe by This Is Not Diet Food. 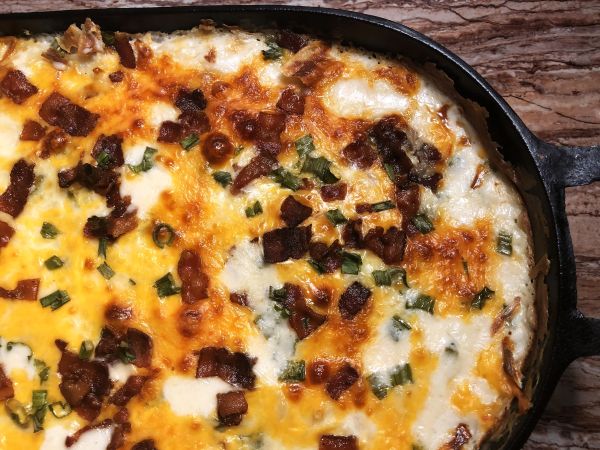 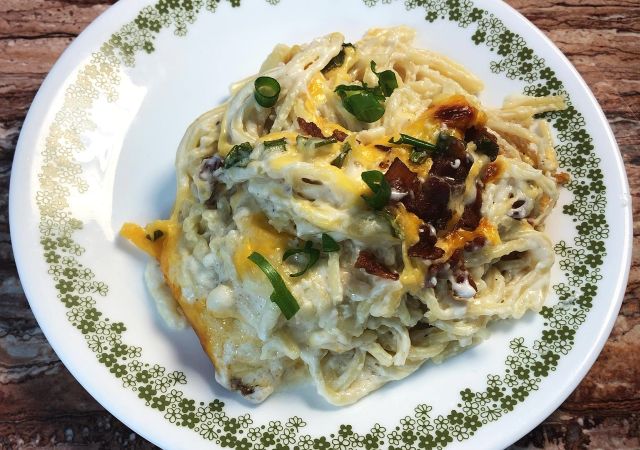