December 17, 2016: This requires little explanation, because it contains the magic ingredient: bacon. Beloved of cast iron cooks and Internet freaks, here's a chicken wrapped, or draped, in bacon and roasted in an Australian made Solidteknics BigSkillet.

Preheat oven to 325 degrees Fahrenheit (163 degrees Celsius, for any Aussies reading this).

Chop 1 stalk celery and 2 carrots. Use half an onion, peeled and half a lemon, unpeeled. Peel and slice a bunch of garlic cloves.

The chicken must be thawed, though you don't have to warm it to room temperature. Rinse off chicken and pat the skin dry.

Generously coat the chicken skin, top and bottom, with kosher salt and black pepper. Stuff chicken with lemon and onion halves, plus some garlic cloves.

Drape slices of bacon over the top of the chicken; wrap bacon around the drumsticks and wings. Tie the legs together.

Place chicken in a large cast iron pan. Add celery, carrots, and garlic cloves all around the chicken. Add 1/2 cup wine to the pan.

Roast chicken at 325 degrees Fahrenheit until the breast temperature reaches 163 to 164 degrees F or 72 degrees C. It's set for 164 rather than 165, because the temperature rises a few degrees as the bird rests in the pan, after being taken out of the oven. (For a 6-pound bacon wrapped and stuffed chicken, this took 2 hours and 40 minutes.) The chicken is slow-cooked to ensure it is thoroughly done, down to the bones and joints. The hot cast iron helps to cook the dark meat underneath, so the dark meat is ready at the same time as the white meat.

After removing the chicken from the oven, let it rest in the pan for ten minutes before removing the bacon and serving.

Was it tender? The white meat was so tender, you could cut it with a fork; and it was dripping with (clear) juices. The dark meat easily pulled apart and practically fell off the bone. There was nothing bland about the taste of this chicken. Like many people, I've cooked a lot of chickens - many mediocre chickens, and a few good ones. I may be no more than an amateur cook, but I feel this was simply the best roast chicken I've made so far with my own hands. 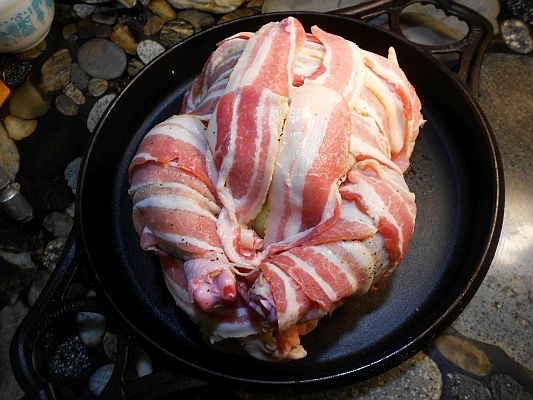