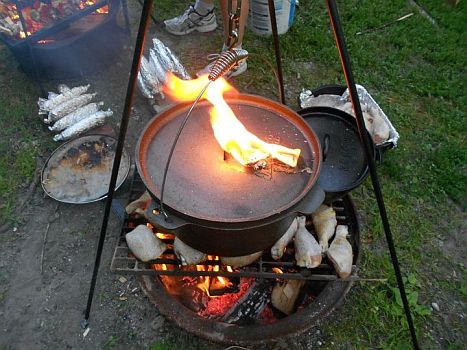 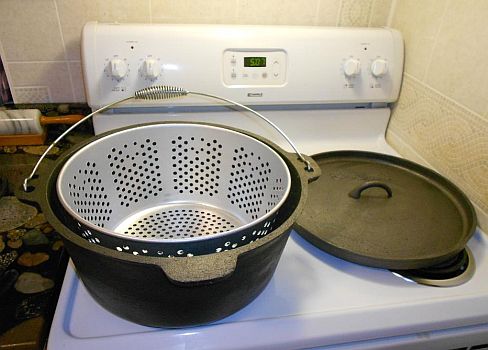 As a self-admitted cast iron fanatic, I wanted a really big dutch oven for cooking outdoors. I settled on the Bayou Classic 16-quart dutch oven because I was quite satisfied with the other Bayou Classic products I'd ordered and used previously: the Bayou Classic 4-quart dutch oven, which I use as a rice cooker; and the Bayou Classic propane burner has performed reliably and given some great outdoor cooking. Previous comments on Amazon (especially the ones more than four or five years old) said there were problems with shipping the equipment, but this problem has apparently been resolved: I received this huge cast iron dutch oven without any difficulty. The lid was wrappped in foam wrapping, though the iron pot itself was bare; the entire shipping box was made from two layers of corrugated cardboard. Given that this was a VERY big and heavy iron pot, I fully expected the outer box to have scuffing or even a rip from transport; for this reason, I was not disappointed at all when I received the dutch oven. (The alumnum draining basket inside the pot was brand-new and undamaged.) The casting of the metal is indeed somewhat rougher than you'd find with a Lodge dutch oven, but once again this was entirely expected. For the cost I paid (including free shipping from Amazon!), I was expecting a bare iron pot, and that's exactly what I received. I am NOT disappointed, as Bayou Classic has delivered exactly what they promised. It also has an advantage over the Texsport Cast Iron Dutch Oven without Legs - 20 Quart on Amazon: the Bayou Classic has an iron cover with a raised rim to allow the placing of coals on top, so that the coals don't fall off; the iron cover to the Texsport doesn't have this.

Bayou Classic has taken some criticism from the fact that it's made in China. As such, it represents both the advantages and disadvantage of Asian-made cast iron cookware: it's definitely a lower quality casting than American-made cast iron – but still very usable – but it also produces cast iron pans that simply are not available from American manufacturers. A dutch oven of this size was never produced by Lodge.

In the past month since receiving this dutch oven, I've cooked a big southern-style Low Country Boil, which fed my entire department at work; I took it on a weekend cookout with the neighbors, and used to fry up mounds of fried chicken, plus fried steaks as well; and I also took it on an out-of-state camping trip, where I made Roman-style zuppa di pesci (fish stew), and also used the pot as a big 15-inch frying pan to make heaping amounts of fried eggs and bacon. The pan had originally been coated with wax to protect against rust, and after I burned off the wax coating, I spent a Saturday morning properly seasoning the pot and lid in my oven at 500 degrees F, with bacon grease.

This pot is a big, hulking monster of a cast iron dutch oven, far bigger than anything sold by Lodge…and it isn't even the biggest cast iron pot available from Bayou Classic. It's big enough for me, though, as I can feed all of my family, friends, and neighbors with this thing. (For Thanksgiving in November of 2012, this pot did a full 17 pound Roast Turkey in Cast Iron.) If you're looking for a HUGE, durable, reliable cast iron pot that can feed an army – whatever kind of army you're facing, whether it's hungry Boy Scouts, campers, restaurant customers, or even real Army troopers – get yourself a Bayou Classic dutch oven or jambalaya pot. This thing is certainly going to last the rest of my life, and beyond…unless they end up burying me in it. It's certainly big enough!