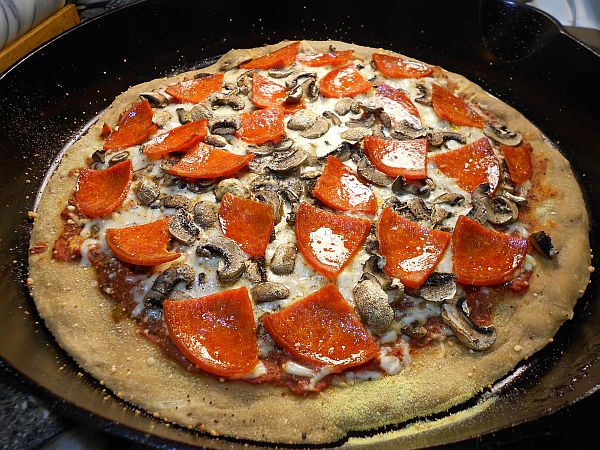 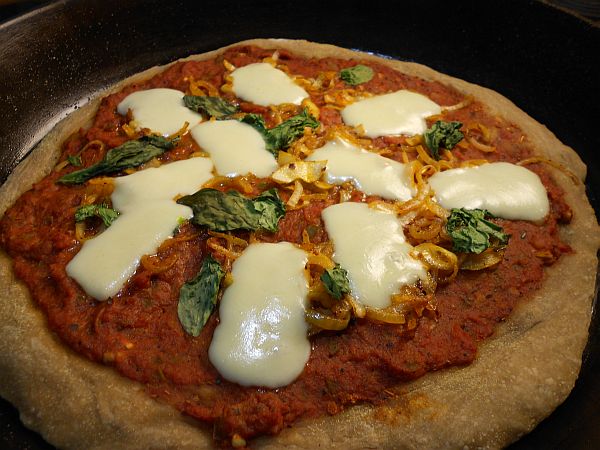 March 22, 2015: This recipe is the result of an experiment in producing a flavorful pizza crust. Instead of water, I used Guinness ale as the base for the pizza crust. It rose slowly over the course of eleven hours, in the manner of the famous no-knead bread dough recipe. This produced a solid and very spongy dough, with a sweet taste that gave a wonderful mixture to the traditional pizza sauce and toppings.

This dish requires about three hours' preparation time, though that includes two hours and fifteen minutes for your crust dough to rise.

Pans needed: A cast iron skillet, griddle, dutch oven, or other pan, 10 more inches in diameter. If you have two cast irons, you can make two thin-crust pizzas at the same time.

Begin by proofing the yeast: In the bottom of a large mixing bowl, pour in the beer and let it warm to room temperature. Add 1/2 teaspoon yeast, and stir it together. Cover the bowl, and wait 15 minutes for the yeast to bloom: a foam will begin forming on the surface of the liquid.

Once the yeast has bloomed, add additional ingredients to the same bowl: flour, salt, olive oil, and corn oil. Mix thoroughly to create a dough. You only have to mix the dough for a few minutes; it does not require a long, tough kneading. The dough will be very wet and sticky, which is exactly how it is supposed to be.

Cover the bowl with a cloth or towel, and let stand for about ten to eleven hours This is a slow rising dough. (If you let it rise overnight, you can place it in the refrigerator in the morning, then take it out about an hour before preparing the pizza. Let the dough return to room temperature before shaping it.)

The risen dough will be enough for two thin pizzas, or one large, thick pizza (which can be cooked in a 12-inch cast iron skillet). When you are ready to use this batch of dough, separate the dough into two equal-sized balls of dough. One ball of dough will be enough to make a pizza pie of up to 14 inches in diameter. The second ball of dough can be used to make a second pizza, or a second layer of the same pizza (if you're making a stuffed crust!); or it can be frozen for another time.

Take out your cast iron skillet or pan (with a diameter of 12 to 14 inches). Coat the surface of the pan (including the sides, if you're using a cast iron skillet) with extra-virgin olive oil.

On your countertop, spread out a tablespoon or so of regular flour. Spread the oil over your entire work space. This will keep the dough from sticking to the countertop as you spread it out. Place the dough onto your oiled work space, or simply scoop or dump it out of the bowl. Knead the dough to coat it with flour and dry out the surface; you only have to knead it for a couple of minutes.

45 minutes to an hour before baking the pizza, preheat the oven to 500 degrees Fahrenheit. As the oven is heating, prepare your ingredients. Have your pizza toppings ready to be added (mushrooms sliced, meats cooked and prepared if you use sausage, hamburg, chicken, or other meats as toppings).

Pick up the dough, and spread it into your oiled pizza pan. Spread it out so that the dough covers the entire pan. Sprinkle on about a tablespoon of corn meal or semolina flour over the top, to give it a dry surface without drying the dough. Don't add the toppings yet: wait until the oven has reached 500 degrees, and add the toppings immediately before placing the pizza into the oven. The sauce should not be very long on top of the dough before baking, or it willl soak into the crust and make it soggy.\

In this order, add your pizza toppings:

Place the whole pizza into the hot oven. Bake for 20 minutes at 500 degrees Fahrenheit. Remove from the oven and place the cast iron pan onto a trivet, cooling rack, or stovetop. Leave the pizza in the pan for another five minutes: the hot iron will continue to cook the bottom of the pizza.

The pan will still be hot. Using your gloves and a heavy spatula, slide the blade around the edges of the pizza to release it from the pan (especially any parts where the sauce touched the side of the pan and cooked into a seal). Now, using your spatula – or a pizza peel, if you want – you can slide the pizza out of the pan and onto your serving tray.