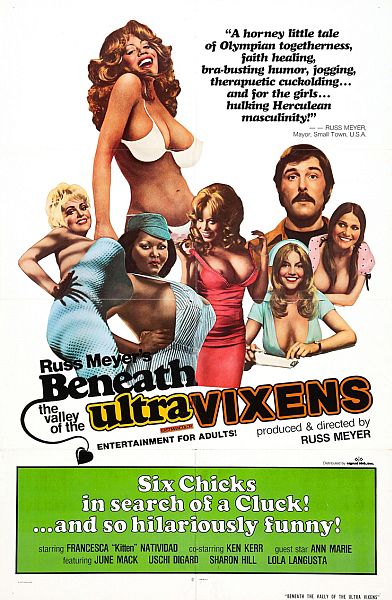 For a while, the Internet Movie Database had a link to a review at film.com (now conveniently deleted) of Russ Meyer's Faster, Pussycat! Kill! Kill! that described that movie as so bad, it "approached the level" of Ed Wood Jr.'s movies. This review was an obvious admission of two things: 1) The writer of that movie had never seen Ed Wood Jr.'s movies; and 2) he didn't even bother to realize what Meyer's movies are about.

The films of Russ Meyer are a legend in themselves, largely (very large) because of the qualities of his leading ladies: enormous breasts. Meyer is known by the title of "King Leer" because of his unabashed fascination with gigantic bosoms. Whether his women are clothed (as in Motor Psycho or the aforementioned Faster, Pussycat!) or baring all for the camera (as in Vixen, Meyer's biggest box office hit), you know that a Russ Meyer movie is going to give you a show of mammoth proportions…at least as far as chest size is concerned.

This is what gives Meyer's best movies their appeal: the acting may not be the greatest, but the performers carry us along with sheer, lustful energy. And that's why watch Russ Meyer's movies: not for the plot, but for the women!

But having given all of this praise to Meyer's movies as a whole, what can we say about Beneath the Valley of the Ultra-Vixens as a movie? Only that it's lewd, crude, ridiculous, and often shockingly funny. Meyer's movies have always been comedies, though as he approached the end of his filmmaking era his movies became wilder, more outrageous, more blatant and unbelievable…and in their best moments, gut-bustingly funny. This movie is one of his best efforts, simply because Meyer goes all out to give us a sex comedy of unbridled proportions. The plot, such as it is, is bare-bones and simple: the hero and heroine (Kitten Natividad) are trying to settle their differences. She prefers simple, straight sex; while he prefers doing it doggy-style anal, a different approach that turns her (and just about everyone else) off. Kitten's attempts to "convert" her husband to the pleasures of sex are the source of the movie's more outrageous situations, such as her dressing up in a wig and performing at a strip club, or taking him to a dentist who happens to be a flaming queer, and ends up trapping him in a closet while smashing at the door with a sledgehammer and a chainsaw. (In his commentary on the film, Meyer claimed that gay audience members loved this scene, seeing it as a spoof of the idea of "coming out of the closet.")

In the tradition of Meyer, all of the men in this movie are stupid idiots, though the hero is a likable fool who just happens to be too dumb to realize the trouble his wife is going through to get him into bed. But the true star of this film, of course, is Kitten Natividad. She's naked for about four-fifths of the entire movie, but more importantly she's smiling throughout the entire movie. Whether she's trying to seduce her dumb-ass husband, or having a quickie with an alleged "fourteen-year-old" town boy (yeah, right - he sure looks fourteen years old!), or even succumbing to the charms of the hostess of the local radio Gospel hour, Kitten proves herself to be the epitome of the Russ Meyer woman.

Several times, using no special effects whatsoever, Meyer bends reality and gives us a surreal, cartoon effect to go along with the absurd plot: during several sex scenes, the mattress suddenly becomes transparent and the performers bounce on bare bed springs (ouch!), so we can get a better view of what's going on. During the fight scenes (which are always between guys – no way would Meyer's women allow themselves to be hit!), the men bleed different color "blood" that reveals their true personalities, either being a "blue blooded" town boy or being a "yellow" coward.

A "narrator" pops up all through this film, providing a completely "serious" (albeit tongue-in-cheek) explanation for our benefit of everything happening in the film, and he even gets to play the role of Peeping Tom himself (in much the same way that we, the audience, are voyeurs). Meyer says the narrator is his tribute to Thornton Wilder's Our Town, and the similarity between the two comes in the film's opening speech, when the narrator explains that the entire sex-crazed population of this Small Town consists of "normal people" and "everyday people." In Meyer's universe, Kitten Natividad is nothing exceptional; all the women are as outgoing and satisfied as she is. And quite frankly, if all the women in our own real world were as outgoing as her character is, we'd probably have a lot less incentive (and energy) to fight wars with each other.

And strangely enough, we can say the same thing about Ed Wood Jr.'s movies, too. Meyer's movies are technically more competent than Plan 9 From Outer Space, but he certainly does share a love for his subject matter with Ed Wood Jr.. These two filmmakers had a true love for their work, and one thing you can say about their films is that they are labors of love. Is Russ Meyer as "bad" a filmmaker as Ed Wood Jr.? No, but he's certainly as dedicated.

So if you ever want to watch a Russ Meyer movie, you can pop this one into the VCR, turn off your brain…and turn on other parts of your anatomy. And laugh.