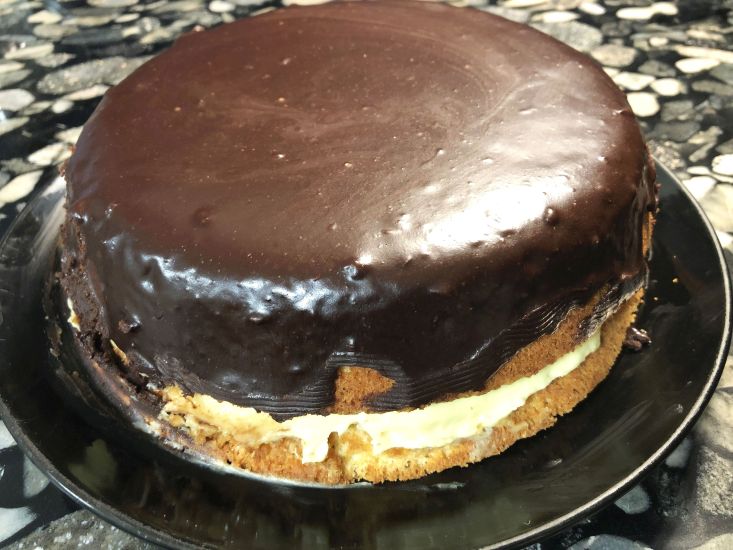 Outside of New England, most folks only know of "Boston cream" as a doughnut fulling, but in fact it comes from a 19th century recipe that catches a lot of people by surprise. The name of this dish is Boston cream pie…but wait a second. Isn't this a two-layer cake? Why is it called "pie"? I did some research into why this is called Boston cream pie, but I didn't get many results. There's a hotel in Boston called the Omni Parker House (originally the Parker House Hotel) that gladly takes credit for inventing Boston cream pie; it's located just outside of Downtown Crossing, and I've walked by there many times. But the only explanation I've seen is that when this dessert was first created there, they used pie plates to bake it rather than cake pans. And so, this is called Boston cream pie. But whether it's a cake or a pie, it certainly is delicious and it's worth making at least once.

After this I may make a Boston cream pie that's really a pie crust full of Boston cream filling. But no one complained about this Boston cream pie, because it was certainly worth the effort to make. It was more tricky than a simple mix and bake cake, but this made it something special, and I'll certainly consider doing it again when a special event comes around.

Pans needed: Saucepan (or two saucepans) for heating cream and melting chocolate. Two 9-inch cake pans, or two 9-inch #6 sizedcast iron skillets if you have them. Mixing bowl for preparing the sponge cakes.

The recipe calls for two nine inch cake pans, but here we're using two vintage cast iron skillets. This helps to remember the history of the original Boston cream pie, when this was originally made in pie plates rather than cake pans.

The Boston cream filling can be made up to 24 hours in advance.

First, heat up the cream until it's just simmering, and cover the pan to keep it hot, but not boiling, while the other ingredients are prepared. This means separating six egg yolks, then whisking in sugar and a dash of salt together. To this we add flour and whisk it all until we have a thick mixture.

Now for the tricky part: stir in about half a cup of the hot cream into the mixture. This is tempering the eggs, so that the eggs aren't cooked and turned into scrambled eggs. Once it's mixed together, slowly pour the egg mixture back into the pan, and stir it constantly for a few minutes. This will thicken it and turn it into our Boston cream filling. Cover the bowl with plastic wrap, in order to keep a skin from forming on the top. Cool it in the refrigerator until it's time to use in Boston cream pie.

Preheat the oven to 325 degrees Fahrenheit.

Whisk flour, baking powder and salt together in a bowl. Remember, this is an important step. We want to be sure the dry ingredients have air in them and aren't compacted together, because that helps the cake to rise.

For the wet ingredients, mix together whole milk and butter, until the butter is melted. Add and mix in vanilla extract, and cover to keep it warm. This will give time to get out the mixer and mix together three eggs – whole eggs this time, not just the yolks – and 1 and 1/2 cups sugar. Mix them together until they're light and creamy, then stop the electric mixer and use a whisk to bring together all of the ingredients by hand. Start adding in the hot milk and butter; then mix in the dry ingredients. This is done by hand so the cake batter isn't mixed too much.

Add the batter to the prepared cast iron pans (or cake pans), and bake them iat 325 degrees Fahrenheit for 20 to 22 minutes, until the cakes are light brown and a toothpick comes out clean. Let the cakes cool completely before putting them together.

Once the cakes have cooled, run a knife along the edge of each cake, and flip it over onto a baking rack. Spread the Boston cream filling over the first cake, place the second cake on top, and place them in the refrigerator to solidify while we prepare the final step: the chocolate ganache.

Mix together cream and butter over medium heat until the butter is melted. Add chocolate, and stir it all together until the chocolate is melted. Let the melted chocolate cool enough so it is very thick, but can still be poured. Then, simply pour on the ganache, and then put the entire cake into the refrigerator for the ganache to cool and harden. And finally, after several hours of work, we have a genuine Boston cream pie.