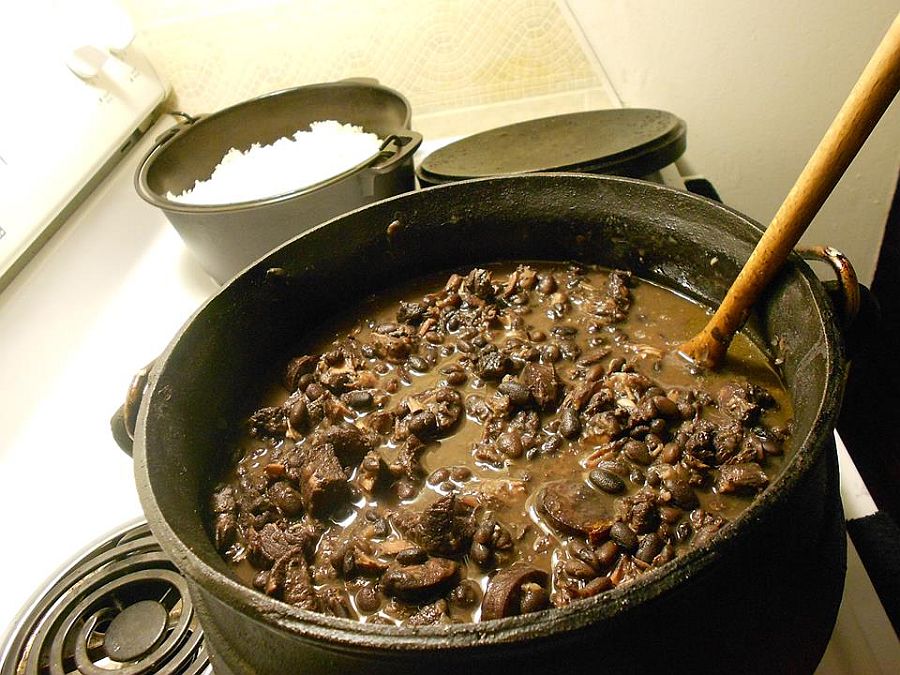 If it's MEAT you want in your stomach, you really can't go much further than Brazilian feijoada, the national dish of Brazil. It's their version of the Monty Python "Spam" sketch, because it can be summed up this way: "Meat, meat, meat, meat, baked beans, and meat." (And some spices.) Like many popular dishes, it's very easy to make: soak two pounds of black beans overnight, brown up tons and tons of meat in a big cast iron pot, add the beans and some garlic and cilantro, and slow cook it on the stovetop at a low-to-medium heat for six hours or more. When you say "I'm making some feijoada," you always end up meaning "I'm making LOTS AND LOTS of feijoada," so I'm inviting my neighbors to help themselves when it is done…five to six hours from now. If you want to die from clogged arteries, just gorge on Brazilian meat dishes – but you'll be certain to die with a smile on your face. 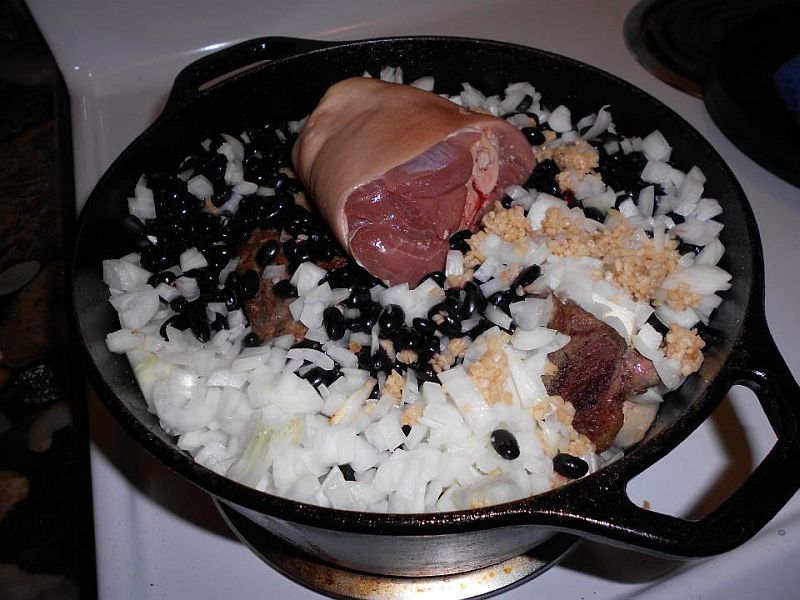 The night before preparing feijoada, empty the beans into a large bowl. Cover with water, and cover the bowl with plastic wrap. Soak beans on your countertop overnight. Don't put the bowl into the refrigerator; the beans soak better at room temperature.

The next day, drain the beans; but keep the drained liquid. (It's now a bean broth.)

Prepare diced onions and garlic. Cut and dice meat for preparation. Cut bacon into small pieces, and place in a separate bowl because it will be going into the pot first. The pork shoulder, beef, and sausage can be cut and added to the same (large) bowl.

Heat a large cast iron pot on your stovetop at just a little more than medium heat. When the pot is hot enough that a few drops of water sizzle and evaporate immediately, add the bacon to the pot. Cook bacon to render out the fat, about 10 minutes. Turn up your stovetop heat to between medium and medium-high. Add sliced pork, beef, and sausage. Cook the meat to brown the outside.

When the meat is browned, add the beans to the pot and stir it all together. Add salt, 1 tablespoon of vinegar, black pepper, cilantro, onions, garlic. Stir it all together. Lay the ham hock on top. Pour enough broth into the pot to cover everything, and almost cover the ham hock. Cover the pot, and let it come to a boil. Reduce heat to between low and medium. Let the pot simmer for at least three to four hours, stirring occasionally. You can simmer the pot longer if needed, until the meat is cooked and coming apart.

Prepare a pot of cooked white rice. Cut orange into slices. Serve feijoada over rice. Garnish with a dash of cilantro on too. Service with orange slices on the side. 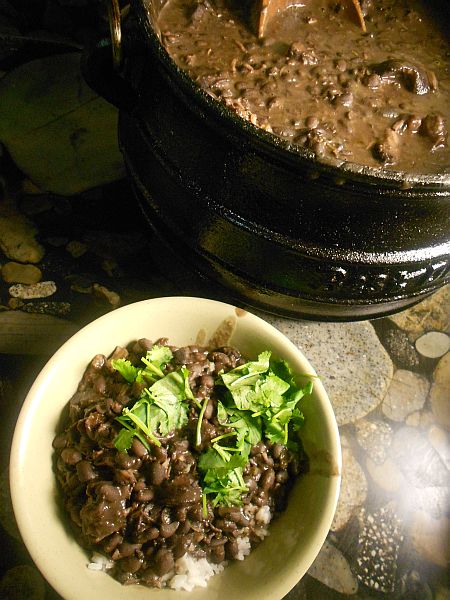