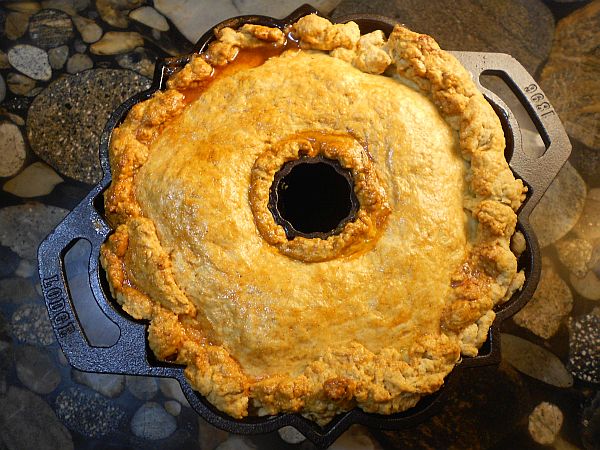 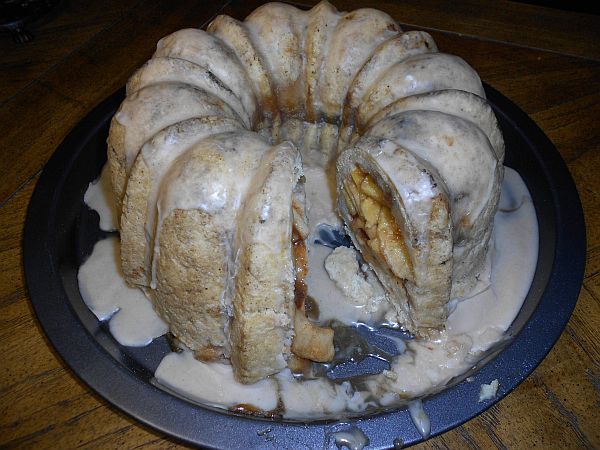 January 5, 2013, 5:00 PM: This was a cooking experiment in progress. A simple three words will describe it: bundt apple pie. No, not cake - PIE. An apple pie with a crust and filling, baked in a cast iron bundt pan.

My newly acquired cast iron bundt pan was ready for use, and I'd been bursting with excitement over it. I'd even had a bundt cake recipe all chosen out as the first thing to bake in it – Alton Brown's Apple Spice Bundt Cake mix. However, thoughts come unbidden to my mind that often distract me; and while I was driving to work the other day, I had let my mind wander. (I prefer to let my mind wander than listen to idiot-oriented morning radio). In the space of a few fleet moments, thoughts had flashed through my head about how I had a cool heavy iron bundt pan – one that would kick ass over a thin, lightweight bundt cake tin. It was just like the times I'd cooked pies in cast iron, ones that were far superior than a pie baked in a pie tin…and then the three words flashed together. BUNDT APPLE PIE. Why not use the cast iron bundt pan to bake an apple pie?

When I looked on Google for any examples of a pie in a bundt pan, I'd found exactly ZERO. Evidently, no one has done this before – everyone bakes cakes and sometimes other things in bundt pans (Hello, Janine and her chicken!

), but apparently no one had written anything online about baking a pie in a bundt pan.

Thinking the idea over, I realized there was only one major difference between baking in a bundt pan versus a pie tin: at the end, you flip the whole pan over and let the result stand on its own. Therefore, the key to this idea would be to use a pie crust recipe that resulted in a solid crust, one that would allow the pie to hold together when flipped over, and keep the pie filling from leaking. And, based upon my experiences with steaming British steak and kidney puddings, I knew exactly what would be called for: suet. I reasoned using a shortening or lard pie crust recipe, and simply substituting suet for the lard, should give a pie crust strong enough to hold together. Indeed, the previous week I'd baked a Christmas pork pie with a suet crust, and that had produced a very solid and satisfactory crust – it required a knife to cut it, but the crust was still tasty and not "chewy" or rock-hard. This was the way to go!

And so, here was my first attempt at making an apple pie in a cast iron bundt pan. I devised the following crust recipe, with spices and sugar added to make the crust more appealing:

Peel and slice apples into equal-sized pieces. (Some folks use thin slices, some use thick slices, and some prefer to cube their apples. This is your preference, but the apple slices should be roughly the same size.) Mix in 1/2 cup sugar. Place a colander into a large bowl, then add the mixed apple slices to the colander. Let the liquid drain from the apple slices for 90 minutes. This will keep the pie filling from becoming runny. (One time, as a sugar-free alternative I used Splenda instead of sugar in the pie, and I discovered that Splenda does not react with apple slices the way sugar does. The apple slices did not drain.)

While the apples are draining, preheat your oven to 350 degrees Fahrenheit and prepare your pie crust. 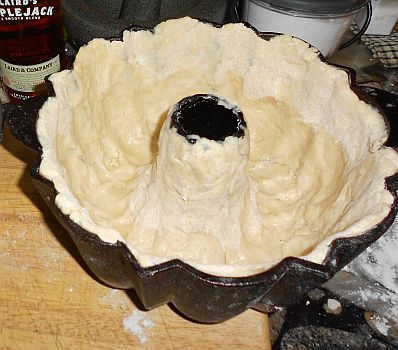 In a large bowl, mix together the ingredients in order: flour, suet, baking powder, brown sugar. salt. Stir together, then mix in spices: allspice, cardamom, ginger. Add brandy and 1/4 cup water. Stir it all together until it forms a dough. Add in extra water if necessary, a little bit at a time, as you knead in order to produce a solid dough that isn't too moist and doesn't cover your hands with sticky gluten. Once the crust dough is thick in consistency, you can then knead the dough with your hands. If the dough is not at the right consistency then add more water, a tablespoon at a time, until you are left with thick dough and no dry crumbs on the side and bottom of the bowl. Separate the mound of dough into two halves, and roll them into two balls of dough.

Grease the entire inside of the bundt pan with shortening, to prevent sticking when the finished pie comes out.

Press one of the balls of dough with a rolling pin into a flat circle. Place it into the bundt pan, and press it out with your hands so that every inch of the inside of the pan is covered. I found the pie crust was indeed very thick and solid, and it was much easier to roll out with a rolling pin than a typical pie crust. I pressed it into the bundt pan by hand, and spent maybe twenty minutes or more pressing the pie crust up along the inner and outer edges of the pan. 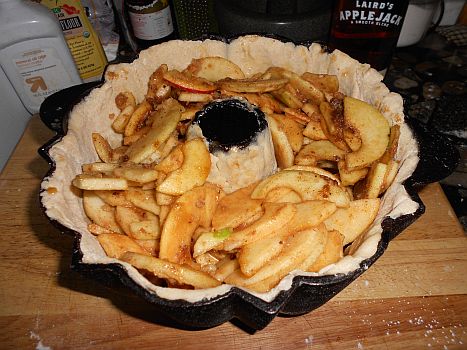 In a large bowl, mix the drained apples together with the pie filling ingredients. Add the filling to the bundt pan.

Roll the other ball of dough into a second crust to add to the top of the pan – and when the pie is flipped over, this will be the bottom of the pie. Because of this, it will be necessary to double over and press down the edges all around the pan. This will crimp it down with the inner crust, and seal the pie as it bakes in the oven. (The pie crust includes baking powder, and the pie filling includes a tablespoon of vinegar especially to react with the baking powder and cause it to expand.) 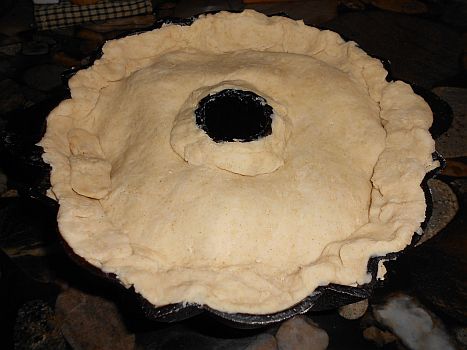 Remove the pie from the oven. At this point the torture begins! It is absolutely necessary to let the pie sit and settle for one hour before flipping the bundt pan over. After this, wait for another hour before lifting the pan off if the finished pie.

January 5, 2013, 6:00 PM: After 60 minutes, I took the bundt pie put of the oven and checked it over. The crust did look as though it had expanded, and it was a little darker in shade than when it went into the oven; but it didn't have the "browned" look I would have liked to see in a pie. I put it back in and checked it every 10 minutes after that. I ended up taking it out after another twenty minutes, for a total cooking time of 80 minutes at 350 degrees F. Finally, it's out of the oven now and cooling on a trivet. NOW came the agonizing wait for the pie to cool and settle, before I flipped it over. I decided to wait an hour before the attempt. 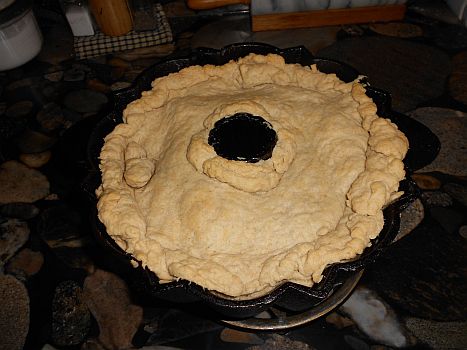 7:00 PM: One hour after taking the pie out of the oven, I flipped it over. Immediately some liquid appeared at the bottom edge of the pan. Upon waiting and examining it for a few minutes, it appeared as though the liquid had slightly increased – but only slightly. A few minutes later, there did not appear to be any change at all in the amount of liquid. 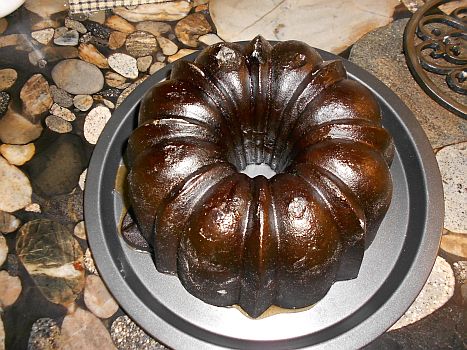 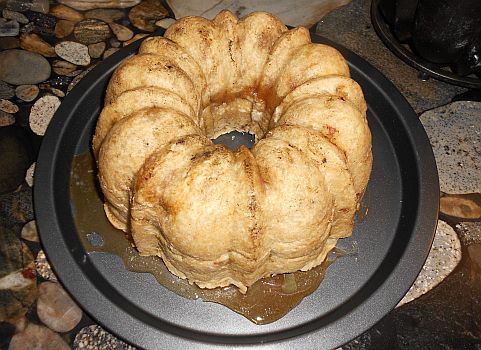 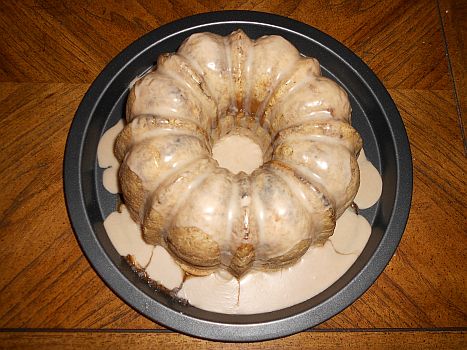 Bring applejack brandy to a boil. Lower temperature, and simmer to boil off the alcohol. As the liquor is simmering, add the reserved apple juice from the drained apples. Add 2 tablespoons of butter, and stir until the butter is melted. Add the mixture of brandy and butter to the powdered sugar. Add 2 tablespoons of heavy cream, plus 1/2 teaspoon cinnamon and 1/4 teaspoon vanilla extract. Stir it all into a thick liquid or a thin paste. Stir in molasses to give the glaze a darker color. Drizzle the glaze over the pie.

I'll admit to being flush with success, but this is still a first-generation recipe and there is definitely room for improvement. (Reduce the amount of suet, possibly; figure out a way to seal the bottom more thoroughly and prevent leaks.) This why I'm making this recipe available for anyone to use and modify to their needs or taste. If you choose to use this recipe, all I ask for is a mention or reference. Above all, I hope you enjoy it.

By the way, some folks may feel that using beef suet as an ingredient will result in this pie becoming an unhealthy calorie bomb. While it does add on some calories to a typical serving, there isn't much of a difference between this pie and a "typical" apple pie. As proof, you can compare the food.com listing for bundt apple pie to the food.com listing for "classic" apple pie. 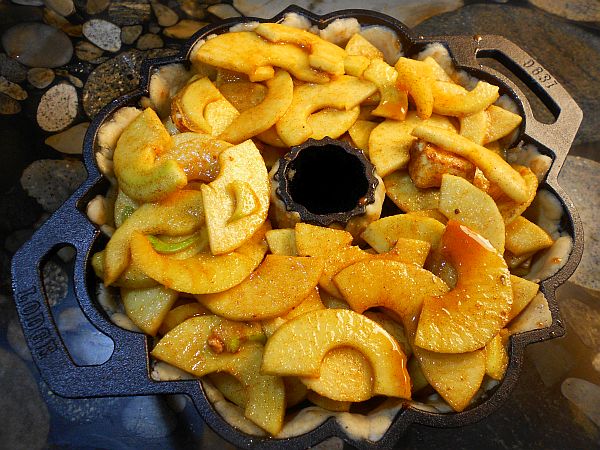