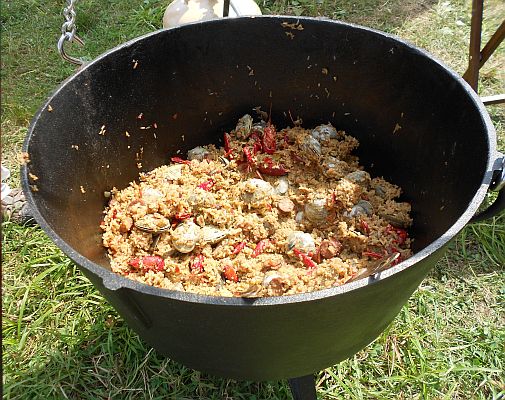 Summer cooking in the great outdoors is an experience that can't be beat – especially if you have the opportunity to cook in cast iron. There's something about cast iron that appeals to cooking outside. Cast iron is nearly indestructible, which makes it the ideal tool for cooking outdoors; but there's an indescribable feeling and taste you get from cooking over a fire in cast iron that can't be matched in the kitchen. As an example, we present a huge pot of seafood jambalaya, cooked the way it ought to be cooked: in a huge cast iron cauldron, over an open fire. Cooking a pot of jambalaya this way is an experience you'll never forget!

This pot of jambalaya required a total of two and a half hours to prepare: 45 minutes slicing and dicing, an hour of cooking, half an hour to cook the rice, fifteen minutes to steam the seafood.

Pans needed: The biggest cast iron pot you can get! The great Cajun jambalaya pots come in sizes ranging from five, ten and fifteen gallons to mammoth cauldrons even bigger than that. Because of this, we're basing the ingredients here on a ten gallon cast iron pot (40 quarts). If you're using something bigger than this, modify your ingredients accordingly. For a ten quart cast iron pot, use one-third the amount of ingredients seen here. For a twenty gallon pot, double the amount!

This jambalaya was cooked in simple steps: 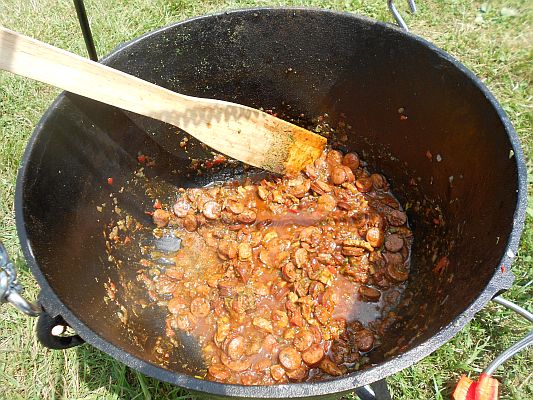 Jambalaya is so popular and so easy to make, folks have it down to a science! Here's a link to a downloadable spreadsheet for estimating the amount of meat, rice, water and spices used to make a proper jambalaya. Here's an important quote from the spreadsheet's creator, Jay Grush, regarding the amount of rice and water used in a big pot: "One thing I did not know, but learned, is that if you are cooking in a pot over a fire, the bigger the pot, the less liquid you need. At 8 or 10 gallons, you start reducing. The surface area doesn't increase, but as the pot gets bigger, less and less moisture is escaping. If you keep using a 2 to 1 ratio, you're going to end up with wet and mushy rice." 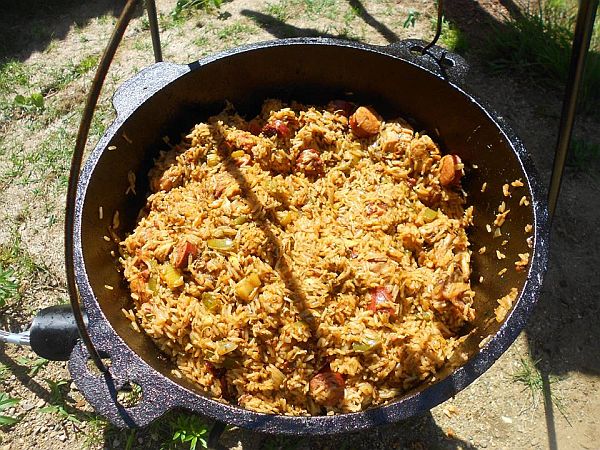 I've since used this recipe a number of times to prepare chicken jambalaya in a Bayou Classic 16-quart (4 gallon) cast iron dutch oven. The ingredients used here are:

Jambalaya in the Kitchen

January 26, 2016: I'd committed myself to making jambalaya to bring to work tomorrow. As it turned out, the boss asked me to head out on a road trip for the rest of the week. This definitely meant there would be jambalaya tonight: a clean-out-the-fridge and use what's thawed out jambalaya. Because of this, some of the ingredients in this jambalaya were a little different than the traditional Cajun choices. For starters, we used some of the duck fat left over from Xmas. This was used to cook three different kinds of sausage: sweet Italian, hot Italian, and andouille sausage; along with five chicken drumsticks. This was mixed in with the holy trinity (celery, onion, garlic), green peppers, and Cajun seasoning; plus two cups of rice, and four cups of water. One reason why jambalaya is so popular is because it's so easy to make! That, plus being absolutely delicious. As anyone who makes jambalaya will tell you, it isn't true jambalaya unless you make a ton of it. This was cooked entirely on the stovetop, in a Birmingham Stove and Range "Century" 1960s #10 sized dutch oven. This dish was based upon this recipe, though the seafood was left out and chicken cooked in the beginning, right after the sausage.

The ingredients for this pot of jambalaya used one-third the amount listed above: 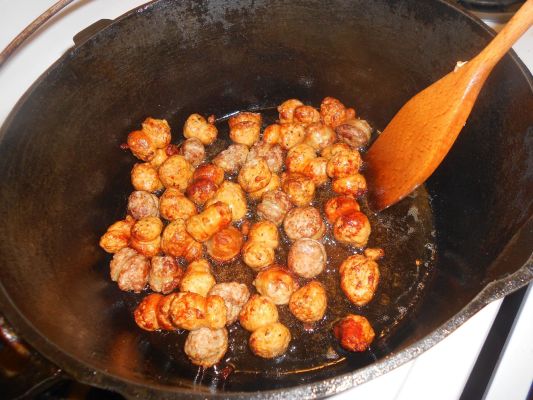 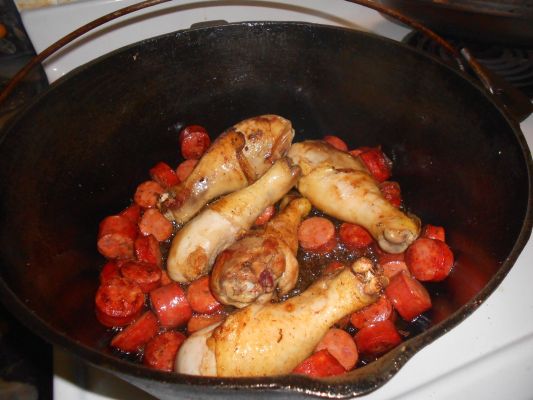 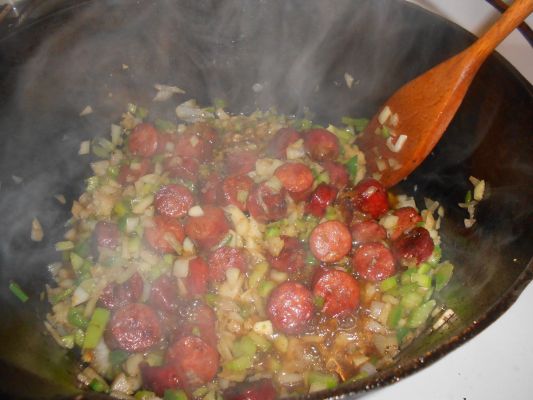 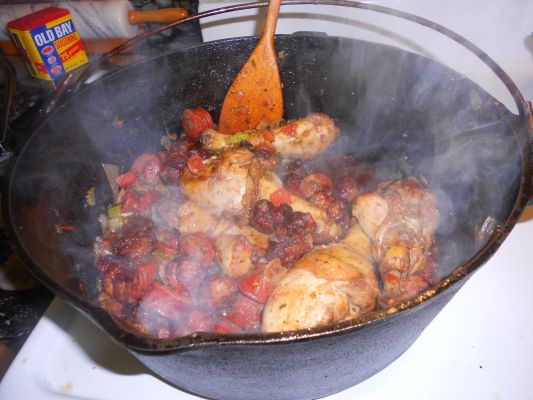 See also: Pastalaya. This is a variation on jambalaya that uses pasta rather than rice! While purist Cajun cooks often sneer at this, pastalaya is very tasty and has become quite popular as well.