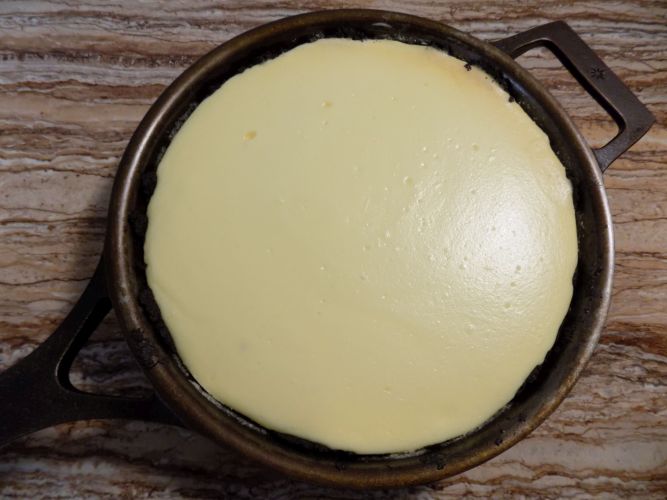 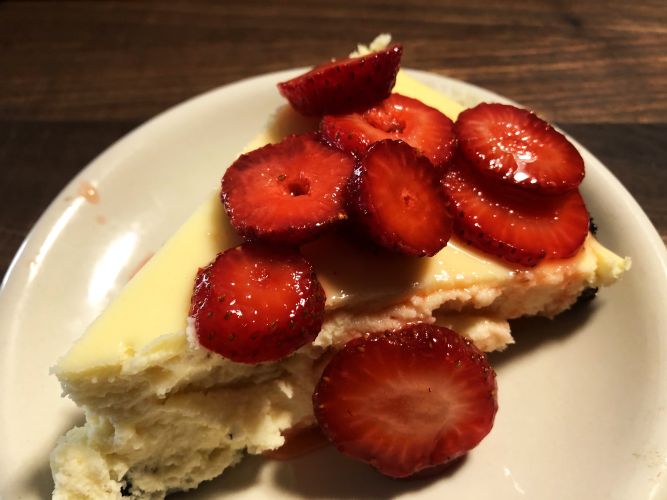 You can make just about anything in a cast iron pan, including desserts. And yes, that even means you can make a perfect cheesecake in a cast iron skillet! Most recipes for cheesecake call for using a spring form pan. But there are advantages to using a cast iron pan to make a cheesecake. The heavy iron will thoroughly cook the cheesecake, ensuring it is fully cooked, rather than having an overdone edge and an undercooked inside.

Pans needed: A 9-inch or 10-inch cast iron skillet. A large bowl for crushing the cookies, to make the cookie crust. A large mixing bowl for preparing the cheesecake batter. A large pan for the bain marie water bath, large enough so the cast iron skillet will sit inside. And, a bowl or cup of hot water, to heat your knife when you slice the finished cheesecake.

Preheat oven to 325 degrees Fahrenheit. We're using 325 as our target temperature rather than 350, because we're making this in a cast iron pan! The heating capability of the pan will thoroughly bake the crust and the underside of the cheesecake, but it will take longer to cool off.

Grease the surface and sides of a cast iron skillet. Melt butter and crush Oreos. In a large bowl, mix crushed Oreos with melted butter. Press crushed Oreo mix onto the bottom and sides of the pan. Place in the refrigerator to chill.

This is where we remember the golden rule: TAKE YOUR TIME! What is the bane of a cheesecake – the one thing a baker does not want to see on a perfect cheesecake? Cracks! A cracked cheesecake is fine to eat and it will still taste delicious. But if you want your cheesecake to look perfect, you don't want to see cracks on the surface. Overbeating the batter will cause a cheesecake to crack! Because of this, be sure not to use the mixer above medium speed. Take your time! 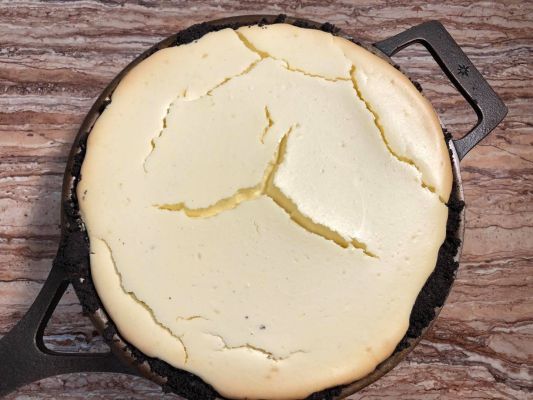 In a large bowl, add sugar and cream cheese. Start mixing slowly, bring the mixer to medium speed. Mix cream cheese with sugar until smooth. After the sugar and cream cheese are combined, turn down the mixer to somewhere between low and medium. Blend in milk, and then mix in the eggs one at a time, mixing just enough to incorporate. Mix in sour cream, vanilla extract. Sift flour and add it into the batter. Mix until smooth. Pour filling into prepared crust.

A water bath is very easy to prepare. After the cheesecake has been poured into the crust, place the pan into a larger basin. Pour boiling hot water, or at least very hot water, into the basin until it comes at least halfway up the side of the pan. Place the entire basin of water, with the cheesecake, into the preheated oven.

Bake for 60 minutes at 325 degrees Fahrenheit. After 60 minutes, do not take the pan out of the oven! Turn off the oven temperature, open the oven door slightly and leave it open just a little bit. Let the pan, and the cheesecake, cool gradually for at least one more hour.

During this next hour, if you want, you can prepare a topping for the finished cheesecake. One simple topping is to mix sliced strawberries and granulated sugar, and let them soak (macerate) in the refrigerator overnight. A recipe for a sour cream topping for the cheesecake is listed above. 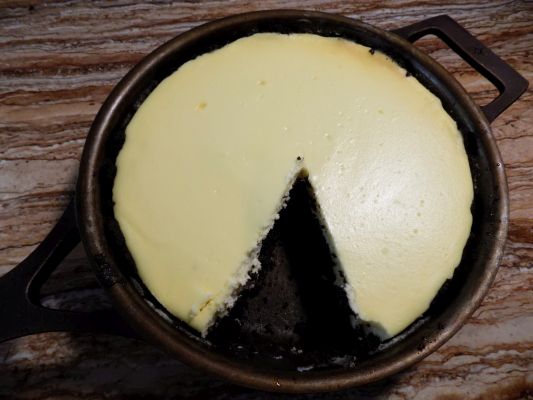 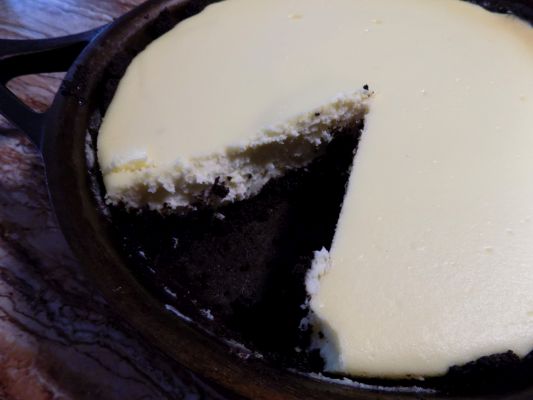