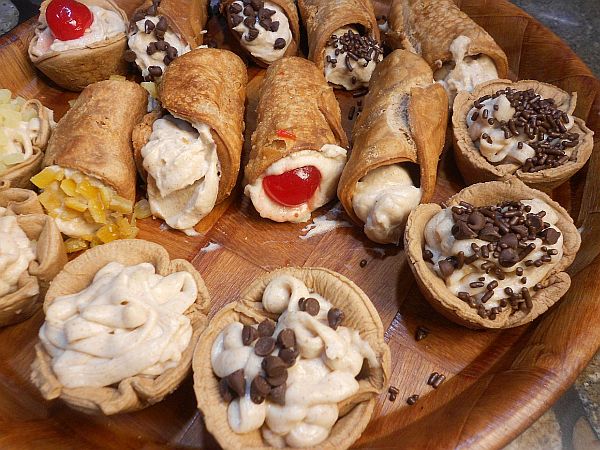 November of 2017 was a turning point in my life for several reasons. Among other things, I visited New York City, and I was celebrating the end of my New York trip with a classic supper at Caffe Palermo in Little Italy: Italian margherita pizza with a cannoli for dessert. I was hoping for a genuine brick-fired oven Neapolitan pizza, but I don't think the pizza was made that way. It still tasted quite good, though not the same as the true Neapolitan I had at Boston's North End. But the cannoli was…heaven. This place brags about having "the best cannoli in the world," and they may well be correct. The crisp and sturdy crust, with creamy interior laced with a few tiny chocolate chips, was like biting into a slice of sweet heaven with a touch of nutmeg and other spices. This place was founded in 1973, when The Godfather had become the #1 movie of all time (a record it would hold until "Jaws" beat it in 1975). If this place had been around during the the time of The Godfather, just after World War II, I daresay Clemenza would have come to this place to pick up his cannoli.

The trip to New York left me with a desire to try my hand at making cannoli. My first attempt was…so-so. From this, I learned an important lesson on making cannoli. What is truly needed for good cannoli filling is patience. A crucial step in making cannoli is to press as much liquid as possible out of the ricotta filling – and don't mix cream or whipped cream in with the ricotta. Adding whipped cream to the ricotta is a cheater's way to make the filling more solid and less runny. For my second attempt at making ricotta filling, a higher quality ricotta was used, with less liquid. It was meant to be pressed down through a screen for two days; however, the hustle and bustle of the holiday resulted it in the ricotta being left in the fridge for five days. Whoops. Fortunately, it didn't mold or otherwise go bad during the extra time, and this certainly did allow more liquid to be pressed out of the cheese.

Meanwhile, the cannoli shells themselves weren't especially difficult to make. The metal tubes used for shaping and frying the shells weren't especially expensive, and I ordered a set of 12 for $10 at Amazon. here are a lot of cannoli recipes on the Internet, and especially videos, that say, "If you really want to be traditional, you fry them in lard…but we're using this other cooking oil here." Guess what, these shells are fried in lard.

Tools needed: Cast iron dutch oven for frying the cannoli shells in oil. An electric mixer is useful for preparing the dough. The metal tubes used for shaping cannoli shells can be obtained from a good kitchen supplier, or online from sites such as Amazon. They're usually not especially expensive.

At least two to three days before making your cannoli, prepare the ricotta. Add cheesecloth to a strainer, and place the strainer into a bowl. Add the ricotta to the strainer and wrap it in cheesecloth. Place a weight on top of the cheese, and place the entire bowl into the refrigerator. Let the ricotta drain for at least two to three days. A longer wait time is fine; I've even let the cheese drain for five to six days with good results.
The result is a cannoli filling with much more satisfying consistency. The cinnamon and nutmeg still turned it a darker color. I wonder if the color would be more yellow-white if the powdered sugar was added after the cinnamon and nutmeg. Regardless, this gave a much more satisfying cannoli.

About an hour and a half before frying your cannoli shells, prepare the dough. Add flour, salt and sugar into your mixer bowl. Mix with a whisk – this is important, to incorporate air into the batter. Cut butter into small pieces and add to the dry ingredients. Add 3 tablespoons Marsala wine. Begin mixing the dough briskly, with either a large spoon or an electric mixer. Every so often, add a little more wine, about a tablespoon at a time. After a few minutes, the dough will take on a crumbly and dirty look. This will show the dough is at the right consistency.

Remove the dough from the bowl, and knead on a clean surface, for five to minutes. Wrap it in plastic and place in the refrigerator for an hour. In a small dish, beat one egg to use for sealing the cannoli shells.

Add enough oil (or shortening, or lard) to cover the bottom of your dutch oven with a depth of about one to one and a half inches of oil. On medium stovetop burner setting, , heat the oil to 360 degrees Fahrenheit. The oil temperature can range from 360 to 375 degrees.

Cut about a quarter piece of the dough. Roll it out on a lightly floured surface. Keep rolling until it’s really thin (curling at the edges, bubbles underneath, stickin’-to-the-board thin). Let the sheet sit for about 10 minutes, to relax, so it won’t snap back when you cut it.

Cut circles in the dough with a round cutter. Roll each circle out to make them little bigger, and a little thinner. Grab a lightly greased cannoli form and wrap the dough around it. BEFORE you finish wrapping it entirely, dab your finger in a little egg wash, and rub it at the end. Then seal it.

You can drop each tube with dough into the oil when it's ready. The shells only take about a minute to completely cook in the oil. You can roll a second tube with dough while the first one is frying. I find there's only enough time to wrap two shells, and fry them together in the oil. The shells only have to fry for about a minute or so, and if you try to roll a third shell, the first two might overcook. Simply roll them around to be sure the entire surface is evenly cooked, then take them out to cool off. Repeat the process, frying he shells two at a time.

Remove the shells from the pot, drain and cool down all the way. Let the tubes cool off, and remove the shells. You only have to twist the shells gently to remove them. Be careful, because these are actually quite fragile. The shells can be stored in the refrigerator for a week. Leaving them uncovered will keep them crisp.