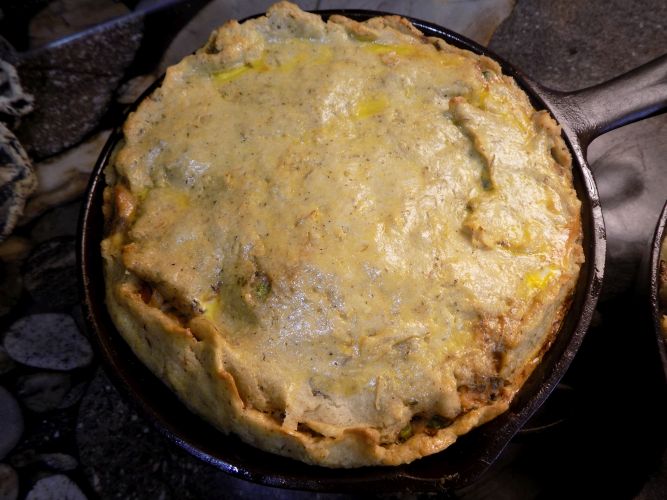 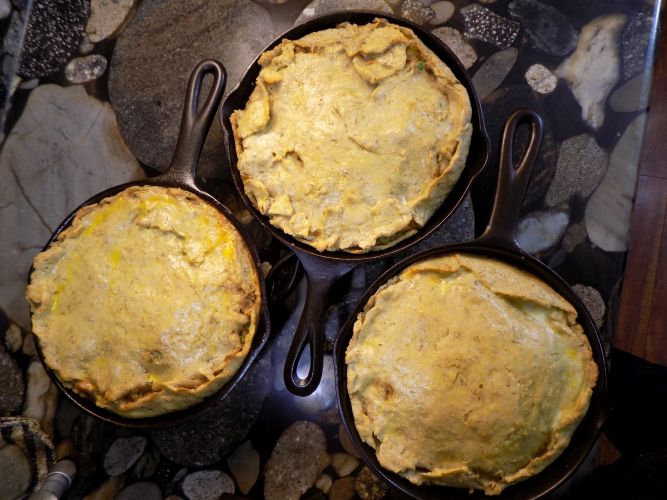 In 2018, I had a lot of fun making Brazilian coxinha in a cast iron dutch oven. Coxinha are balls of cooked chicken wrapped in a tasty dough and fried in oil. They're very delicious, but I was amazed by the simple and wonderful dough used for wrapping these fried chicken croquettes. This dough was extremely easy to make, it held together well, it wasn't lumpy, it kneaded well, and it shaped easily. It was also very tasty. This dough was so much fun to work with, I had to wonder what else it could be used for, and I thought it would be interesting to see if this dough could be used to make a pot pie. And this is the result: pot pie made in a vintage cast iron skillet, using Brazilian coxhina dough.

This pot pies didn't have a flaky crust like you might want in a pot pie, but I enjoyed this crust on its own. It was sturdy and chewy, but it wasn't dried out, and it had a wonderful flavor that made this pot pie very enjoyable. This is very different from a typical pot pie, and it's certainly an order of magnitude more delicious than those frozen microwave pot pies sold at the supermarket. This was a lot of fun to make and it really wasn't difficult at all. I really recommend giving this a try yourself, and if you do try it, please post your comments here, and let us know how it turned out. Trying new things is one of the greatest adventures you can have in cooking, and this is certainly something new that I hope you try for yourself, and especially, I hope you like it.

In a large stock pot or dutch oven, bring 4 cups chicken broth to a boil. While heating the broth, mix together 4 cups flour, salt, pepper, rosemary, and Italian seasoning. Mix this flour mixture into the boiling broth. Cover the pot and let cool. While the dough is cooling, prepare the pot pie filling.

Preheat oven to 400 degrees Fahrenheit. Place a large cast iron skillet or dutch oven on the stovetop, and heat at medium heat while preparing the ingredients.

Heat the cooking oil in the hot cast iron pan, and sear chicken pieces, stir frying for at least ten minutes. Reserve extra liquid from the meat into a metal bowl; this will be added back into the pan when the roux is being prepared. The meat will be fully cooked when you can cut pieces in half with your spatula, and see they are thoroughly cooked on the inside. Add celery and onion, salt, pepper, garlic powder, thyme and paprika, and cook until onions are soft.

Melt 5 tablespoons of butter into the mixture, stirring until the butter is melted. Add flour. Mix in until well incorporated. Add the reserved liquid from the meat. Stir in cream, a little at a time, to produce a thick roux. Begin adding chicken broth, a little at a time, and stirring it all together to thin the roux to the consistency of a thick gravy or sauce. Keep adding broth, a little at a time, until the pot pie filling is at the thickness and consistency you want. Stir in peas and carrots, and parsley. If the filling is too thick, you can keep adding chicken broth to thin it until you are at the right consistency.

Grease a cast iron skillet with shortening. By now the dough should still be warm, but not hot enough to burn your hands when you knead it. Knead the dough and shape it into a flat pie crust. Press the dough into the pan, and cover the entire inside of the pan with the dough, including the sides. Make sure there is enough dough left over to cover the top of the pie. Fill the pan with pie filling. Shape the remaining dough into a cover for the pie. Place on top of the pie, and press the pie crust together to completely cover the pie.

Beat 1 egg in a small bowl. Brush egg wash over the top of the pie.

Bake at 400 degrees Fahrenheit for 30 minutes. 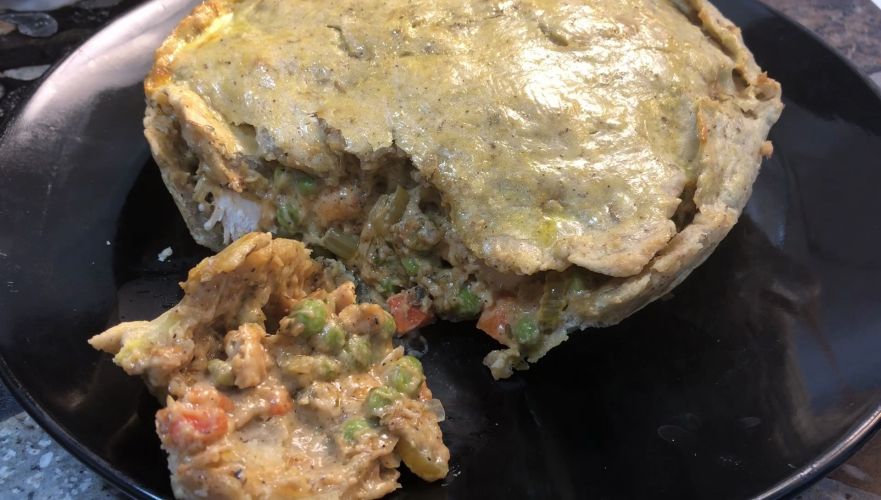