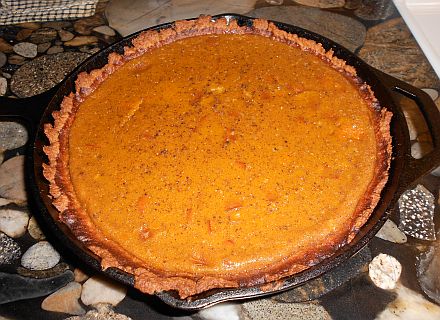 Most recipes for pumpkin pie call for the use of a 9 inch pie plate. But why settle for that, when you can make a monster pumpkin pie in a 12-inch cast iron skillet? Here I recommend the use of a cast iron skillet, preferably one that's ten to twelve inches in diameter. First of all, cast iron is the best there is at retaining heat, and this will give you a shorter cooking time, AND help to cook your pie all the way through. Also, the iron pan is more durable than a glass or aluminum pie tin, and it's okay to use metal utensils to slice your pie.

For the record, a single 12-inch cast iron skillet will let you cook an amount that's about equal to two nine inch pies. You can take any recipe for a nine inch pie and double it, and it will fit nicely in this cast iron skillet. Likewise, the amount of ingredients used in this recipe would make two 9-inch pies, if you want to make regular-sized pies. Or, just reduce the ingredients by one half and make one 9-inch pie.

The best pumpkin to use is a sugar pumpkin. Your local supermarket might sell this as a pie pumpkin. It's much smaller than a regular pumpkin, but it's still not expensive. Carving the pumpkin is the biggest reason why people are afraid to prepare their own pumpkin puree for a pie: normally, you have to chop it up, cut up the insides, clean out the seeds, and use knives or blades that could put you at risk for injury.

Here's a simple trick: roast the entire pumpkin in the oven, before carving it! 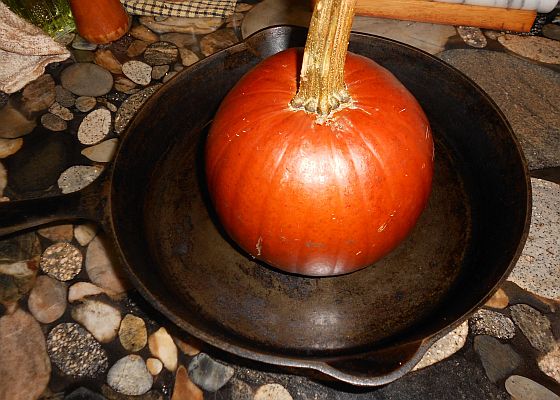 Preparing the pumpkin is very simple:

The pumpkin will be so soft, you can peel off the skin with a butter knife! All you need to do is:

One more thing – after roasting the pumpkin, scooping out the innards, and scraping the meat off for the pie…you can eat the skin! I'm not kidding, either – after all, pumpkin is a squash. 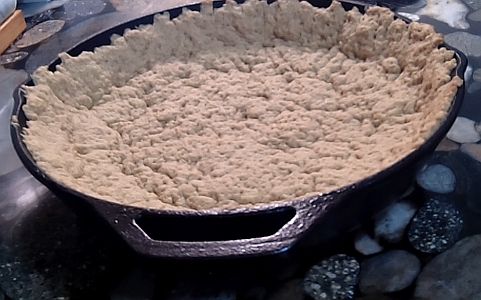 Heat oven to 450 degrees F. Mix together flour, baking powder, salt, sugar, shortening, and butter in a small bowl. Add water; stir vigorously until soft dough forms. Press with hands into cast iron pan. The dough will be light brown because of the brown sugar, and the butter and shortening in the mix will give it a very moist, spongy consistency. When you press it into the pan, be sure to press the dough all the way to the upper rim of the pan. The crust will dry out and shrink slightly when in the oven, so having it all the way up to the rim of the pan is important. Bake at 450 degrees F for 10 minutes. This does not produce a fully baked crust – remember, it is going back into the oven with the pie filling.

Preheat oven to 425 degrees F. (If you've just baked the pie crust at 450 degrees, simply lower the temperature to 425.)

In a large bowl, beat the eggs. Stir in the pumpkin, sugar, salt, cinnamon, ginger, and nutmeg. Mix in cream and milk, add vanilla extract. Stir until smooth. The filling will be very runny and soupy; it will not thicken very much when you stir it. This is exactly correct, and you're not making a mistake – the custard will thicken when it bakes in the oven. Pour filling into cast iron pan.

When you remove it from the oven, the pie filling will still be unfinished! It will have a semi-solid texture and still ripple when you move it. This is correct. Your pie did not fail. You must let the pie rest for a minimum of one hour to allow the cast iron pan to finish cooking the eggs in the batter. This will help the filling to set and harden.