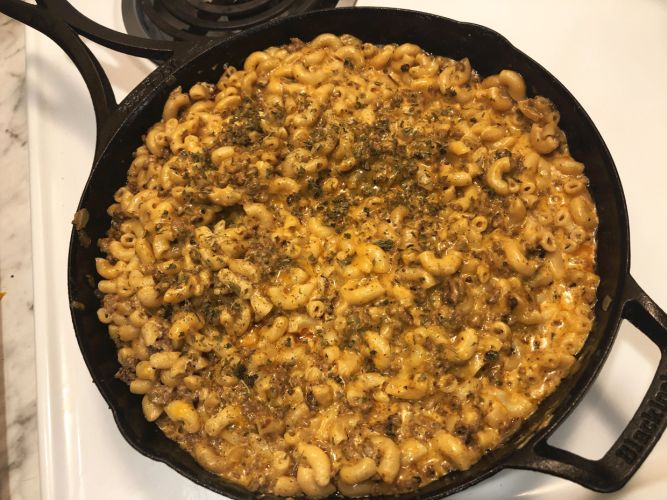 This one happened when my roommate asked me to make Hamburger Helper. I made a dish of homemade hamburger stroganoff, and she enjoyed it; but afterwards, she then said, "Next time I want the stuff in a box." And so, I made her the stuff in a box. Did it taste good? Actually, yes. Did it taste fantastic? Hell, no! My biggest gripe was with the macaroni pasta included in the box of Hamburger Helper: if there's a full cup of dried pasta in the package, I'll be very surprised. The dried pasta must have been pre-cooked or partially cooked, because when I followed the instructions on the package, the pasta was far overcooked and much too soft. As for the taste, it was good but not fantastic.

And so, here we present a recipe for homemade "hamburger helper" that is much better than the stuff in the box. It's also easy to prepare and not difficult. It does require chopping up an onion, and the uncooked pasta does have to be steamed in the liquid for 20 minutes rather than 10 minutes (or less) as stated in the instructions on the Hamburger Helper box. However, I think you – and your kids – may enjoy this.

Pans needed: 1 10-inch cast iron skillet with a lid. (The lid doesn't have to be iron.)

Cook the ground beef in a large skillet over medium high heat until no longer pink. Drain the grease and return meat to the pan. Reduce heat to low and add the ketchup. Mix it in, then add chopped onions. Stir fry everything for about five minutes or until the onions are soft.

Mix in 1/2 cup of sour cream, then 8 ounces (2 cups) shredded or grated cheddar cheese. Stir everything until the cheese is melted and completely mixed in. Top with fresh or dried parsley, and serve.