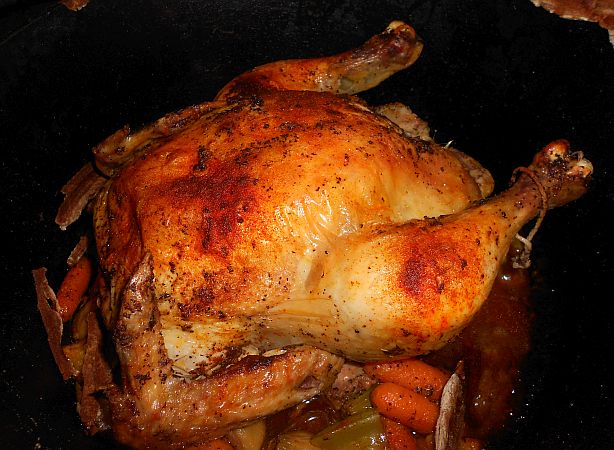 I came across Dorie Greenspan's famous recipe for chicken, roasted in a cast iron dutch oven at high heat, in 2012. I've made this dish a number of times since then, and the results have been consistently good. What separates this from other roast chicken recipes is the use of a dough seal, to seal the lid to the pot as the chicken bakes. This braises the meat and cooks it thoroughly, all the way to the bone. Steaming the chicken ensures it remains juicy and not dried out - especially the breast meat. Meanwhile, the skin is browned and crisped by searing the chicken in the dutch oven, before adding mirepoix vegetables. From there, a dough seal is applied to the lid, and the chicken is then cooked at high heat for a fast cooking time.

The liquid used to make this dish can vary. The best result so far has been when I rested the chicken on top of thick pieces of bread, surrounded the chicken with vegetables, and also added half a cup of wine to the pot before sealing it. I've made this both with and without the additional white wine added to the pot, and also with and without the bread. Adding the extra liquid produces a more flavorful bird; while omitting the wine makes the skin more crispy. Likewise, adding bread to the pot will absorb the extra juices released by the chicken and vegetables; though this will work without adding the bread.

Tools needed: A cast iron dutch oven with a lid, at least four to five quarts in size. I've found a larger dutch oven (of the #9 and #10 size) works even better, as it gives more room in the pot for the steam to circulate. Most of those videos and recipes for this dish use an enameled dutch oven, but I find it even better to use a bare iron pot, because nothing in the world is better for searing meat than hot iron. String or twine is needed, to tie the chicken legs together. A metal dish or bowl to reserve the chicken, removing it from the pot after it has been seared. Bowls or dishes to hold the chopped vegetables.

You'll also need a hammer and chisel, or the equivalent (such as a screwdriver), to break the hard dough seal after the chicken has cooked.

Preheat oven to 450 degrees Fahrenheit. Heat the dutch oven (lid removed) on the stovetop burner at medium heat for 10 to 15 minutes. This will make the pot hot enough to properly sear the chicken.

While the pot is heating on the stovetop, peel the onions and garlic cloves. Cut the lemon in half, and put one half aside or in the refrigerator for another time. Cut the other half of the lemon into two pieces. Cut one onion into two halves, and set one half aside with the potatoes and carrots. Cut the other onion half into two pieces. Slice the garlic cloves in half. These pieces will be used to stuff the chicken.

The potatoes and carrots don't have to be peeled. Cut potatoes, carrots, celery, and the other one and a half onions into large pieces. Mix these vegetables in one large bowl.

Remove giblets and other accessories from the inside of the chicken. Pat chicken dry with paper towels. Add the chicken giblets (if any) to the vegetable bowl with potatoes, carrots, celery, and onions, and keep this aside. (Note: Despite popular advice, it is not necessary to rinse off the chicken. This does not remove germs and bacteria from the chicken, especially any under the skin and within the muscle. Rather, placing the chicken into a hot oven and cooking the chicken to 160 degrees Fahrenheit will safely pasteurize the chicken and kill any nasty germs.)

Mix flour and water together to form a simple dough. Keep this aside.

Heat oil in the bottom of the dutch oven for one minute, then sear the chicken to brown all sides. Remove the browned chicken into the metal bowl. You can turn off the stovetop heat now.

Place large pieces of bread inside the dutch oven. Place the chicken on top of the bread. Spread the vegetables (plus the giblets) all around the sides of the chicken in the pot. Add wine to the pot. Sprinkle paprika over the top of the chicken, to give the skin a brown color.

Add whatever additional herbs and spices you want to the chicken and the pot.

Place the pot into the preheated oven. Cook at 12 minutes per pound, at 450 degrees Fahrenheit. If you're using an especially meaty bird such as a large roaster chicken, cook at 13 minutes per pound to add a few minutes to the cooking time. So, a seven pound roaster would 13 x 7 = 91 minutes, or about an hour and a half at 450 degrees.

When the pot comes out of the oven, the dough will have baked into a dark pretzel-like crust, all around the rim of the pot. Use the hammer and chisel to break this seal. When you remove the lid from the pot, there will be a big puff of steam as it escapes the pot. Be sure to open the pot in front of your dinner guests, so they can see this!

The dough pieces can be eaten, but they're very dry and crunchy, and they have a taste like bland unsalted pretzels. I've sometimes considering adding spices to the dough especially so it would taste better when eaten. Also, because the dough pieces are so dry, they're very hard and tough. If you want to eat the dough pieces, you may want to soak them in the chicken stock and grease on the bottom of the pot for a long time first. 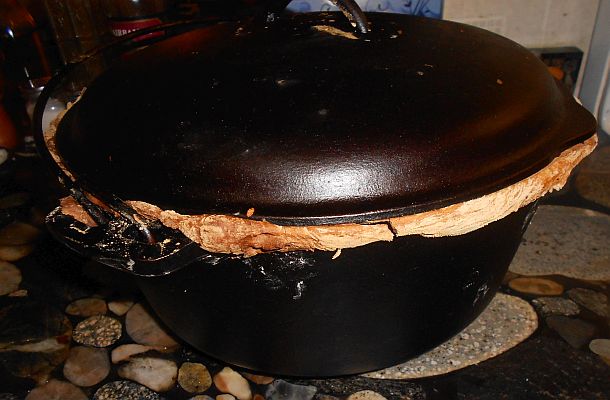 – Recipe based upon Poule au pot: "Chicken in a Pot" by Dorie Greenspan, as published at: www.thatskinnychickcanbake.com/chicken-in-a-pot-frenchfridayswithdorie/