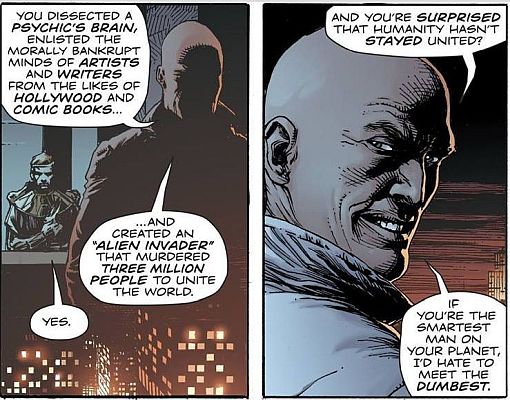 Years, or even decades, after being a comic book geek, I'm reading two ongoing series…Mage: The Hero Denied and Doomsday Clock. I had to read Mage because it's the third and final chapter of the story that began thirty years ago with Mage: The Hero Discovered and Mage: The Hero Defined. I started reading Doomsday Clock out of curiosity, largely because it claims to continue the story that started with Watchmen. I'm finding Doomsday Clock to be…well, largely disappointing. It puts a lot of emphasis on character building, which is good. The artwork is also quite good. But the grand idea behind Doomsday Clock is, of course, marketing and comic book sales. (Yes, I know that's the main goal of any comic book.) Watchmen had a genuinely interesting story to tell, as has been explained in its exhaustive reviews, analyses, commentaries, movie adaptations, and so on. The whole point of Doomsday Clock is "Let's bring the Watchmen characters into the DC Universe and have Dr. Manhattan meet Superman." The back cover of each issue has a countdown clock, like Watchmen did. The midnight hour, however, has Superman's symbol.

The story gives us the obvious conclusion that Watchmen had to lead to: Ozymandias' master plan was doomed to failure. This sequence when Ozymandias explains his plan to Lex Luthor, at the top of this page, sums it up. In this story, the world of Watchmen essentially ends in nuclear war in issue #2…except for a few survivors who dimension-hop over to the DC Universe. For some reason, Ozymandias has figured out Dr. Manhattan traveled there at the end of Watchmen, so he's come over to there to look for Manhattan and apparently convince him to the save the world. Whatever.

The artwork by Gary Frank and Brad Anderson is consistently the best part of this. It continues the "dark and realistic" look of Watchmen without being a slavish imitation of Dave Gibbons' original style. There are times when it tries to follow the "9 panels per page" pattern of the original book, but of course writer Geoff Johns is no Alan Moore, and as such he doesn't attempt to continue in this vein. Doing so would have hampered the artwork. Nonetheless, on its own the art is very rich and detailed, portraying dark and moody colors and filling each frame with details; even if the details aren't as full of meaning as they were in Watchmen. It's no surprise much of the symbolism Alan Moore used in Watchmen is entirely missing: not only artistic placement of the comic panels, but also the background details in nearly every panel, the deliberate double meanings of several important scenes (the best example being Dan Dreiberg and Laurie Juspeczyk having sex in front of the TV, with Ozymandias on the screen doing a gymnastics routine that echoes their own loving rhythms), the recurring motifs (especially the infamous smiley face), and so on. Also, there isn't a single pirate to be seen anywhere in this story, nor is there any reference or homage to the Tales of the Black Freighter story-within-the-story. About the only one of Watchmen's "radical" changes to the comic book medium still existing in Doomsday Clock is the lack of sound effects captions. The explosions don't say "BOOM!" and the gunshots don't say "BANG!"

As for the writing, Geoff Johns is a consistently good writer of modern-day superheroes. This is actually this series' biggest flaw, as it doesn't aspire to be anything more than a superhero story. At least it attempts to be a decently written story, one that keeps the reader interested even as it plods forward at a snail's pace, attempting to fill twelve issues of story because of course the original Watchmen was twelve issues long. You can tell Johns was told to keep the adult theme of the original, as there's a lot of graphic violence and someone says shit on every other page. Of course, this series is at the halfway point and we haven't seen one hint of the other adult topic of the original Watchmen, namely the sex. Doomsday Clock makes some attempts to develop its characters and make them interesting, and the results are hit and miss…

- Rorschach. Lame, lame, lame. They had to bring back Rorschach simply because he was the most popular character of Watchmen, and so we have a silly superhero origin story for this guy: he's the son of the psychiatrist who examined the original Rorschach, and he was caught in the "psychic blast" that killed three million people in New York City. This messed him up so much, he…gasp…took on Rorschach's identity and even started saying "hurm" like the original. I want this Rorschach to die painfully, but it probably won't happen. In the future this guy will certainly be meeting The Question, the comic book character who inspired the original Rorschach. Until then we have to suffer through this idiot's story.

- Marionette and the Mime. Not bad for second-rate supervillains. As the only original characters in this series, they get some genuinely interesting writing, even though they have to go up against the other evil clown of the DC universe, namely the Joker. The story makes the right decision by focusing on their feud with the Joker, rather than wasting our time showing how Batman was captured by the Joker…again. Of course we'll have to read on and see how he'll escape and defeat the Joker…again.

Marionette and the Mime are the closest we've seen so far to the equivalent of Dan and Laurie, a.k.a. Nite Owl and Silk Spectre from Watchmen. This series doesn't even bother mentioning those two, aside from one single comment balloon saying their whereabouts were unknown. This is because Dan and Laurie were the two "every day, normal" characters of Watchmen, and they were what made the series seem realistic and believable. They were two ordinary people caught up in the actions of all of the other fantastic, larger-than-life characters; so of course they had to meet one another and fall in love. (Alan Moore did the same thing in the first two League of Extraordinary Gentlemen books with the characters of Alan Quatermain and Wilhemina Harker.) Doomsday Clock is a superhero story, and as such all of its cast are larger than life. But other than being sadistic and murderous, this husband-and-wife couple are the ones we can identify with…sort of.

- Ozymandias. Possibly the most interesting character here, only because he's such a train wreck. Johns really pushes Adrian Veidt's psychopathic egomania here, as he's absolutely convinced he knows more than anyone else, and of course he's equally certain his actions are justifiably correct. During the years between Watchmen and Doomsday Clock, Veidt discovered he had brain cancer. I'm certain the big plot twist at the climax of this series will be the shocking revelation that he didn't travel to the DC Universe to save his own world. He came here looking for Dr. Manhattan to cure his brain cancer; though he would never admit this to anyone, including himself. There's an amusing sequence as he notes the difference between the Watchmen universe (i.e. "real life") and the DC universe, while he fights Batman: he points out that superheroes can't really change the world. All they can do is punch each other, while history continues unchanged. This was one of the satiric and crucial points of Watchmen and its so-called "deconstruction" of superheroes…and since this discussion happens to take place especially when two costumed freaks are punching each other, it may be Johns' own satirical take on this theme. Of course, having made this amusing observation, Ozymandias is now reduced to just another costumed clown among many in his new world. Will he died at the end of Doomsday Clock, or will he live on to become a DC comics superhero or supervillain? Seeing how superheroes never really die in mainstream comic books, the answer to that seems obvious. (As Dr. Manhattan said during the final moments of Watchmen: "Nothing ends, Adrian. Nothing ever ends.")

In the midst of this, DC has spent the past year or two building up to this series with what is a genuinely original idea, as far as mainstream comic books are concerned. The cause of the current trouble in the DC universe isn't a big supervillain this time, but a conspiracy theory called "the Supermen theory." In the story, a lunatic Web site started a conspiracy theory that "97% of all metahumans [superheroes] were created intentionally by the United States government." This theory is a fraud, like nearly all conspiracy theories. But it's become incredibly popular and many people believe it, including political leaders. And when a lie is believed by a large portion of the population, it becomes impossible to kill. (See also many existing conspiracy theories about chemtrails, Pizzagate, HAARP, vaccines, Sandy Hook, and so on.) There's some symmetry here, hopefully intentional, in that Doomsday Clock begins with the exposure of Adrian Veidt's conspiracy in Watchmen, then segues into the "Supermen theory" of the DC Universe. This is the most interesting part of Doomsday Clock, but they're keeping it in the background. And that's frustrating. I'm also worried that in the end, some sudden magical deus ex machina – Dr. Manhattan, for instance – will suddenly expose the lie of the Supermen theory, and it will vanish overnight. Like everything else in superhero comics, that never happens in real life.

I haven't even bothered looking for any commentary from Alan Moore about Doomsday Clock. Moore is well known these days as being a grumpy old codger who throws a temper tantrum when anyone dares write a story with one of the characters he created. DC owns the rights to his story and his characters, and they can do whatever they want with them. But even though we have Before Watchmen and Doomsday Clock and the Watchmen movie and even the brilliant Saturday Morning Watchmen, none of this reduces the enjoyment of reading the original story. I prefer a quote from the New York Times: "The American novelist James M. Cain once remarked that he had rarely gone to see the screen version of one of his novels. 'People tell me, don’t you care what they’ve done to your book? I tell them, they haven’t done anything to my book. It’s right there on the shelf. They paid me and that’s the end of it.'"