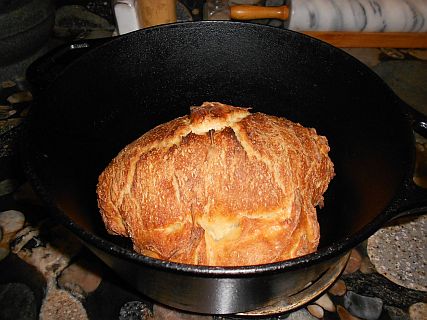 In 2006, the baking world was turned on its ear when a ''New York Times'' article on no-knead bread appeared. Suddenly, everyone was baking terrific bread, at next to no cost or effort. However, there were two drawbacks to the recipe that kept it from being truly simple: the three stages of rising the dough, and the 19-hour wait time. This recipe here is a simplified version of the no-knead bread recipe, one the requires only one bowl, one cast iron dutch oven, and a total of about 2 hours and 50 minutes from flour to fully risen, fully baked bread. This includes five minutes to mix the dough; two hours to rise the dough; and 45 minutes' total baking time in the oven.

Pans needed: One medium-sized bowl, one cast iron dutch oven. (The cast iron pot is essential for heating your bread.)

Into the bowl, add:

Mix it all together until you have a wet, sticky mound of dough. 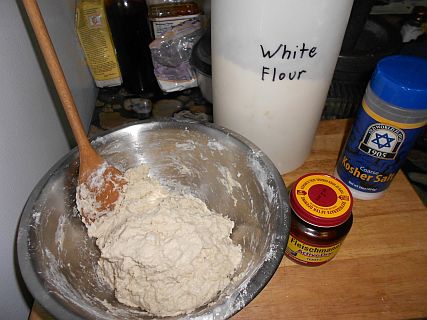 Cover the bowl with a cloth. Wait two hours for the dough to rise. Not nineteen hours – only two hours. The original recipe called for only 1/4 teaspoon of yeast; the increased amount of yeast is to induce a faster rising time. 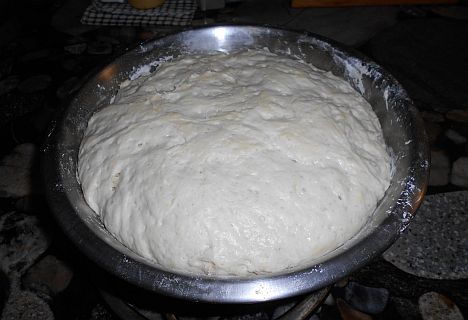 After the dough has risen for two hours, use heavy gloves or potholders to take the dutch oven out and put it onto your stovetop range. Uncover the bowl of risen bread dough. Take the cover off of the dutch oven (still using the heavy gloves!), and dump the risen dough out of the bowl directly into the dutch oven. (It will sizzle immediately when it hits the hot metal!) 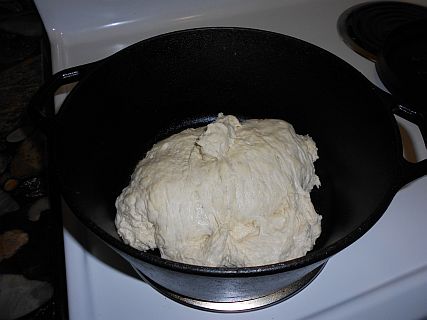 Cover the dutch oven (again, using the heavy gloves), place the pot back into the oven, and bake for 30 minutes at 450degrees F. After 30 minutes, remove the cover and bake the bread in the uncovered pot for 15 minutes.

Remove the dutch oven and admire your fully cooked no-knead bread. You will still need those heavy gloves to remove it from the hot pot, and you'll find that the crust is very thick. It will require a good knife to cut it…but the inside will be soft, moist, and well-done.