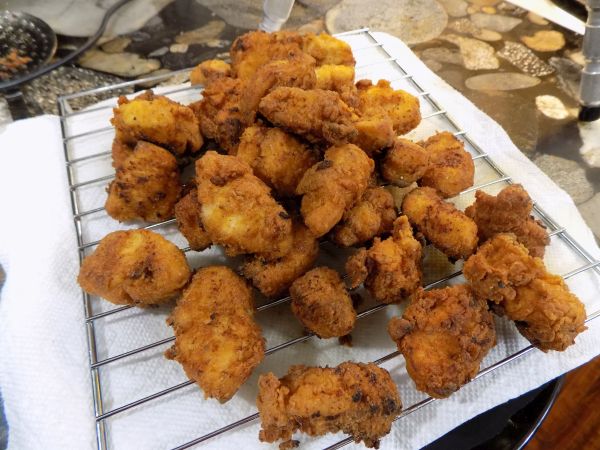 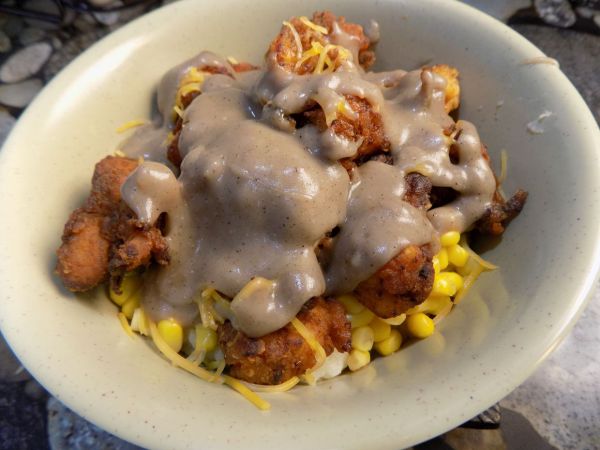 Here's how Patton Oswalt, the comedian, ruined Kentucky Fried Chicken for me:

Now, I love the KFC famous bowl, and so does Patton Oswalt. He's said so himself. But now, every time I eat KFC chicken, this statement comes to mind: I want a failure pile in a sadness bowl!
So, we could either be upset that he's having some fun with a popular greasy fast food dish that, really, does deserve this treatment. Or, we could do something better and make one of these failure bowls, especially inspired by this routine. And that's what we're doing here: breaking out our trusty cast iron, and making a copycat of the KFC famous bowl…or rather, a failure pile in a sadness bowl.

Frankly, this was a lot of fun to make, and if this a bowl of failure, then I'll sign up for it and fail some more. This is good stuff, and it's certainly worth trying yourself, whether or not you buy it at KFC or make it yourself. 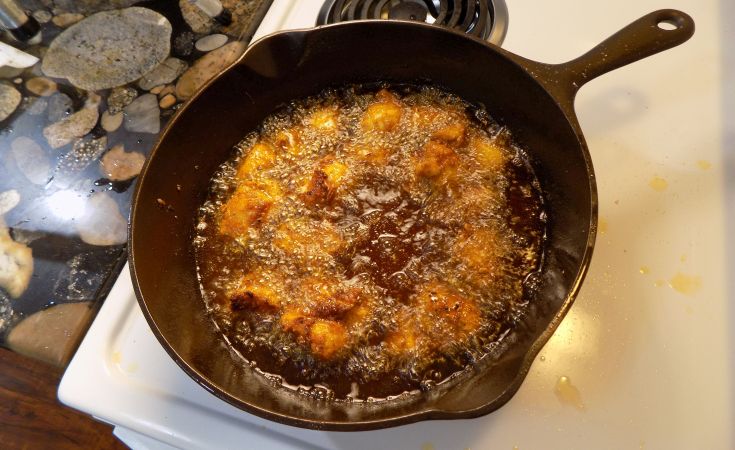 You can make the chicken nuggets in advance and store them in the refrigerator, then re-heat them when the potatoes and gravy have been made.

With a good knife, cut the chicken breasts into nuggets. Add them to a bowl, pour in 2 cups buttermilk. Cover the bowl, place in the refrigerator, and let the chicken soak in the buttermilk for at least two hours. During this time, make the breading for the chicken by mixing spices together in a large bowl. Add two cups bread flour. Use a whisk and mix it thoroughly.

Don't peel the potatoes – the skin adds taste and nutrition. Wash the potatoes, then slice them in half for faster cooking. Put them in a saucepan or dutch oven. Fill the pan with water until the potatoes and corn are mostly covered, but not entirely covered. Add a tablespoon of salt. (This amount of salt is to make the water salty; most of the salt will remain in the water without being absorbed into the potatoes.) Cover the pot, bring to a boil and boil on high for 20 minutes, until the potatoes are soft.

When the potatoes are ready, drain the water. Add the additional ingredients for mashed potatoes: butter, milk, basil, parsley, pepper. Mash everything together into a creamy potato and corn mash.

Boil water, mix in bouillon. This will be added to the roux to make the gravy.

For the roux, melt 4 tablespoons (1/2 cup) butter at medium heat in a large cast iron skillet. Continue stirring the melted butter, and mix in the flour, a little at a time. This will become a thick roux. Add bouillon water, a little at a time, and whisk vigorously until it thickens into gravy. Mix in pepper, garlic powder and ground sage. If the gravy is too thick, add more water and whisk until it reaches the right consistency.

Prepare the bowl. Start with a layer of mashed potatoes and gravy, then add corn. Add a layer of chicken pieces. Sprinkle shredded cheese over the chicken, and top it off with more gravy. Add ground black pepper and salt (optional). Serve while still hot. 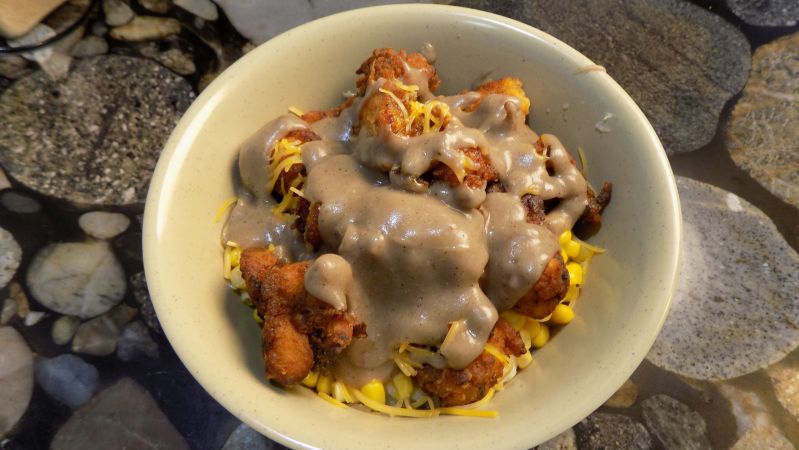 A Failure Bowl with More Fail 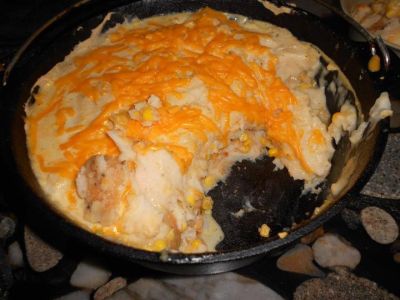 If you don't want to take the time to make each ingredient in this dish from scratch, give this one a try:

Now, I should mention that you could prepare this yourself without the pre-packaged ingredients, and it would probably be more nutritious and healthy that way. But that would negate the entire point of the KFC Famous Bowl: fast food thrown together in a single bowl for your convenience.

This recipe shows that the KFC bowl is really just a shepherd's pie made with chicken nuggets instead of ground beef. Simply prepare the mashed potatoes, open the package of chicken nuggets and the can of corn, and lay them out in a 12-to-15 inch cooking pan. Be sure to drain the sweet corn but not the creamed corn, so it won't be watery. Start with a layer of mashed potatoes, then a layer of corn, then a layer of chicken nuggets. In a separate bowl, mix the beef bouillon into the gravy. Pour the gravy over the nuggets, and top it off with another layer of potatoes. Spread the shredded cheese over the top layer of potatoes.

Bake in the oven at 350 degrees for 30 minutes, until the cheese is melted.

The portions shown here will give you two or three heaping bowls of failure. Scoop it out, add salt and pepper and whatever seasonings you like, and serve.

(An addition suggestion from an anonymous contributor: "If you truly want an authentic KFC experience, I suggest adding a cup of ground pepper, and cook it for two hours to get that nice, crunchy, dried-out consistency.")