George A. McVey is this incredible machine that burns 'frop, drinks coffee, and churns out artwork. In his teens, he worked for Marvel as a member of "The Crew," creating and drawing the original versions of most of Marvel's most popular villains (and a few of the heroes, as well). MARVEL DOES NOT WANT YOU TO KNOW THIS because he was under 18 at the time, and the folks in New York shut him out of getting name recognition. He now works as art director for Hamtramck Idea Men, spending much of his time on his own series, PULP DREAMS. 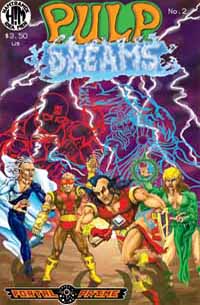