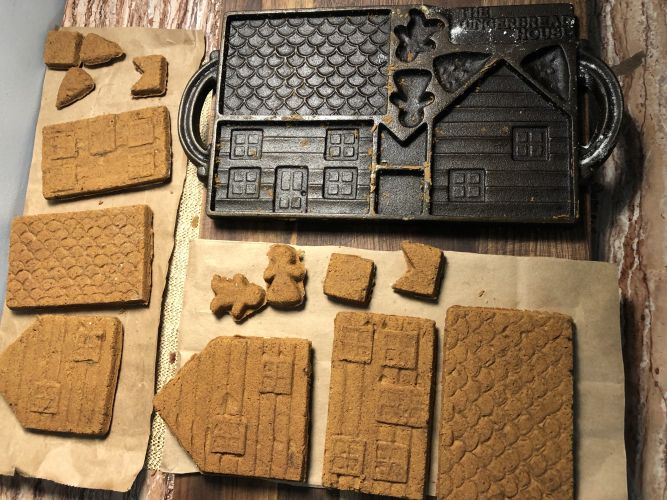 In the 1980s, the John Wright company of Pennsylvania began producing a number of very fancy, elborate cast iron baking molds. Their Web site mentions briefly that they shifted away from production of cast iron toys in the later 1980s, as they moved into production of "reproduction and shutter hardware." The company still sells a number of these molds today. Some of them are marked with the date, and none of them have a date mark newer than the 1980s. In addition to making these beautiful molds for cookies, cakes and candy, John Wright also produced what may be the only genuine cast iron gingerbread house mold, which they don't sell on their Web site anymore. I managed to find one of these at the Brimfield Antique Show in 2018, and I've been wanting to give it a try ever since. It turned out a gingerbread house is easier to make than you might think, as long as you have the right tools for the job. Obviously, this is why gingerbread house building kits are still popular today, especially during the holiday season. But there's a true sense of satisfaction that comes when you make it yourself. 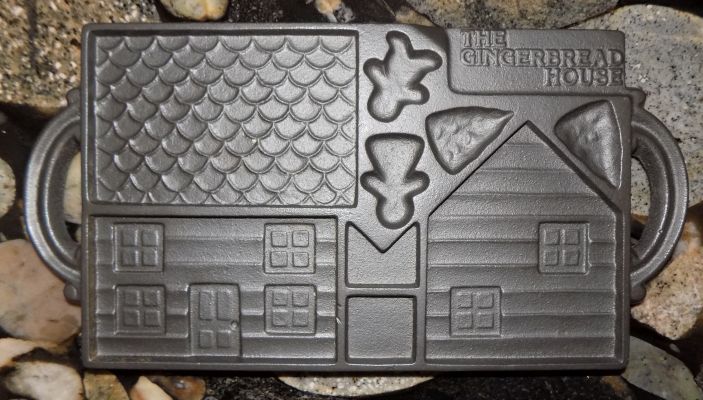 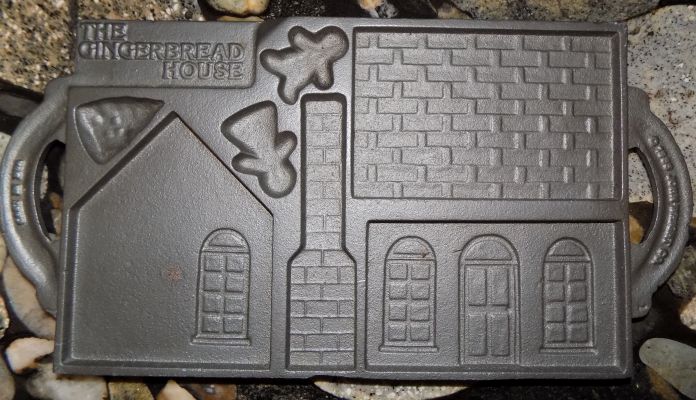 Pans needed: 1 large bowl to mix dry ingredients. 1 large mixing bowl, the same size or bigger, to mix everything together.

In a saucepan (or a cast iron skillet) set over low heat, or in the microwave, melt butter. Add the melted butter to a large mixing bowl. Stir in brown sugar, molasses, salt, cinnamon, ginger, and allspice. Let the mixture cool until it is at least lukewarm.

While the butter and molasses mixture is cooling, use a second large bowl and whisk together flour, baking powder and baking soda. Whisking the dry ingredients is important, to incorporate air into the batter.

When the molasses mixture has cooled until it is lukewarm, beat in the egg. A little at a time, add the flour mixture into the molasses mixture, and mix it all together until it becomes a very soft and sticky dough. This may seem more sticky than typical dough, but this is the right consistency. Divide the dough in half, and pat each half into a thick ball; it doesn't have to be round. Wrap well, and refrigerate for 1 hour or longer. The dough may be sticky and hard to roll out if not thoroughly chilled, so make sure it's cold before continuing.

Before baking, preheat the oven to 350 degrees Fahrenheit.

Grease the cast iron mold with cooking spray or margarine, being sure to get the grease into the fissures of the pattern. Press the dough into the mold firmly, filling each section level with dough. After the dough is pressed in, flour a rolling pin and run it along the top of the mold, to help press down the dough even further. Be sure to press the dough firmly into the mold so the pattern is transferred to the dough. Bake at 350 degrees Fahrenheit for 20 to 25 minutes. (Don't turn off the oven when the cookie shapes are ready, because you'll need to bake a second batch of gingerbread.)

After baking 20 to 25 minutes, place the mold onto a rack or trivet to cool for 20 minutes. While the cookies are still hot and fresh, run a knife between the shapes to separate them, so each piece will come out of the mold separately. After twenty minutes, the gingerbread cookie shapes will be firm enough to remove from the pan. Run a knife or fork around the edges of the pan to release the cookies. They should be firm enough to gently lift out of the pan.

Let the pan cool another ten to twenty minutes, then repeat the process: grease the pan, press the dough into the pan, and bake a second batch of cookie shapes.

Let the cookies rest on a rack or baking sheet, uncovered, for several hours if possible. This will completely dry them out, and make it easier to build the gingerbread house.

In the bowl of an electric mixer, combine the sugar, egg whites, cream of tartar and salt. Whisk until stiff and glossy.
To tint the frosting, divide into small bowls. Cover the ones you aren’t using with plastic wrap; the frosting dries out very quickly. Use a rubber spatula to stir in desired food coloring.

Transfer frosting to piping bags fitted with very small round tips (sizes 1 to 2 work best). Pipe frosting onto cooled cookies and let set, at least 2 hours. Or use a pastry of paint brush to decorate cookies with the frosting.