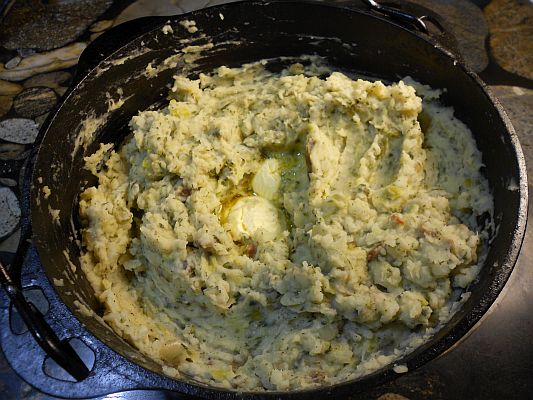 Here in the USA, whenever the subject of Irish food is brought up, people immediately think of corned beef and cabbage, especially on St. Patrick's Day. That's actually not accurate, as corned beef and cabbage on St. Patrick's Day actually began in the early 20th century in New York City. What we have here is colcannon, which is much more likely to be served in Ireland on St. Patrick's Day, or actually, at any time of year. It's a very simple dish made primarily of mashed potatoes with cabbage and greens mixed in, and there's certainly no need for you to wait until St. Patrick's Day to try this. It's very easy to make, and the entire dish seen here took only about one hour to make, all the way from start to finish. All we do is boil potatoes, cabbage, and greens together in a cast iron pot, and when we're ready, we take our masher and start mashing.

Colcannon is more traditionally served on Halloween, and like many traditional holiday dishes, the host would hide small symbolic objects in the dish for people to find. Colcannon at Hallowe'en used to contain a plain gold ring, a sixpence, a thimble or button. Finding the ring meant marriage within the year for the person who found it, the sixpence meant wealth, the thimble spinsterhood and the button bachelorhood. But whether or not you believe a dish of mashed potatoes and cabbage may tell whether or not you're going to meet the girl of your dreams, it's still a very satisfying comfort food.

Add potatoes to pot. (Peeling the potatoes is optional. I never peel my potatoes, I love them with the skins on.) Cover with the spinach. Chop up the cabbage and add that on top. Sprinkle 1 tablespoon salt, fill pot with water to 2/3 level.

Cover, bring to boil at medium heat, boil for a total of 50 minutes – including heating the water. One of the many great qualities of cast iron is the way it boils water very fast, much faster than a typical steel or aluminum stock pot. Leave the cover on for the entire time.

While the potatoes and cabbage are boiling, prepare the sausages (or other meat). Preheat a cast iron skillet, and cook the sausages until they're well-done and crisp. Slice the sausages into bite-sized pieces, or however large you want the pieces to be. The sausages will be mixed into the finished colcannon, and they'll be better if they're more solid and less soft.

After 50 minutes, remove from heat and uncover. The cabbage and spinach will be wilted and soft. Add 1 cup cream, 1/2 stick butter, plus ground black pepper, parsley, basil, and the sausages. Get out the masher and mash away, mash away, mash away all. Top with chives. Dig a well in the center, add butter, and serve.