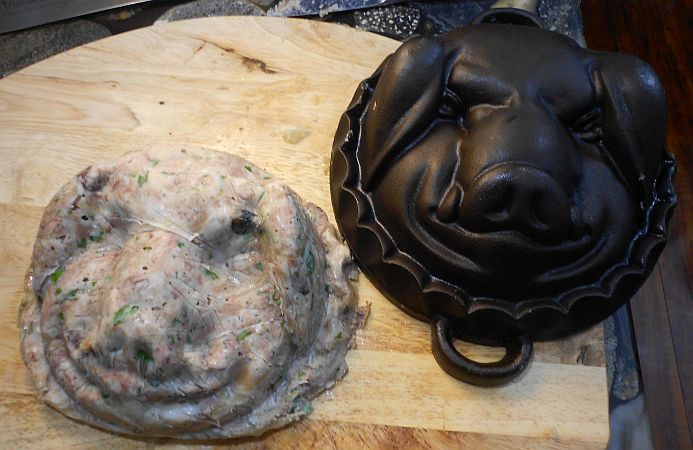 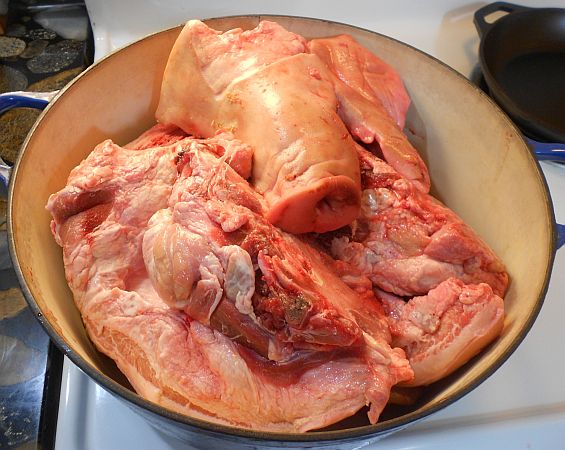 If you want to gross out your friends and family, but still produce something that is absolutely delicious, you won't find many dishes more delectable than brawn or hog head cheese. In French this is known as fromage de tete, while it can also be pickled with vinegar to make souse. The squeamish part comes from the way this uses an entire pig head or hog's head to produce the meat, along with other parts of the pig such as pig's feet. Those who've made this dish know, however, the head of the pig actually produces some of the tastiest and best pork. This is why brawn or souse has been a delicacy in many societies since the Middle Ages and before. It's one of the original cold cuts, because it's intended to be chilled and served cold, usually on crackers or bread. 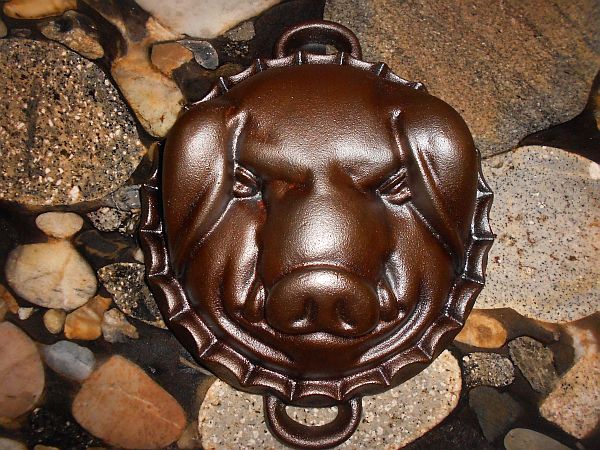 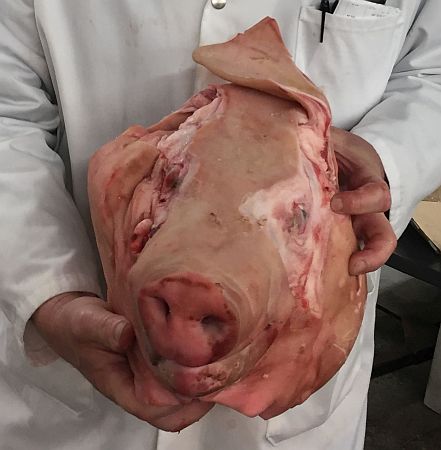 Recently I was lucky enough to acquire this cast iron pig mold, and what this actually is, is a mold for shaping brawn or head cheese. These pig heads are rather popular among cast iron collectors; but I'm determined that all my pieces be users and not just for display. And so, I took the time to contact a local butcher and order a pig head, for making old-fashioned brawn or head cheese. Before taking it home, I asked the butcher to cut the head into quarters. That way I wouldn't have to struggle to cut it open myself.

You don't even need an actual head to make head cheese. If you can't get a head, or you don't feel you can deal with one, you can use any part of the pig including regular pork shoulder and especially pig's feet, and prepare this dish in exactly the same manner.

Two lessons learned from this experience: First, be BOLD with the spices! se your favorite spices for pork. Most importantly, use LOTS of it! This is your dish, and you can use whatever spices you want. If you want to use Creole or local seasoning for pork, go ahead and do so. There are recipes for sausage and pepperoni all over the place, and using the spices for those meats will really give this an extra kick.

Second, when making this dish, be prepared to get pork grease all over the place. I was happy to see the cast iron pans did not rust from being in the refrigerator all night. When the pans were washed in hot water, the jellied grease melted and rinsed off immediately, and cleanup was very easy.

Pans needed: A HUGE stock pot, cauldron, or other stew pot for boiling the pig head, at least 12 quarts or more in size. Two or three HUGE bowls for separating the meat from the bones, fat and indigestible parts. Plus, molds or bowls for shaping the finished brawn and chilling it in the refrigerator. This cast iron pig head was made especially for shaping head cheese, but many people simply use bread loaf pans, cake pans or regular bowls. 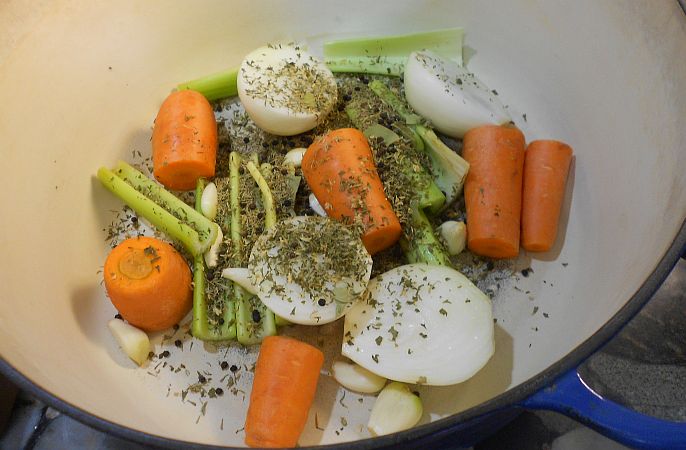 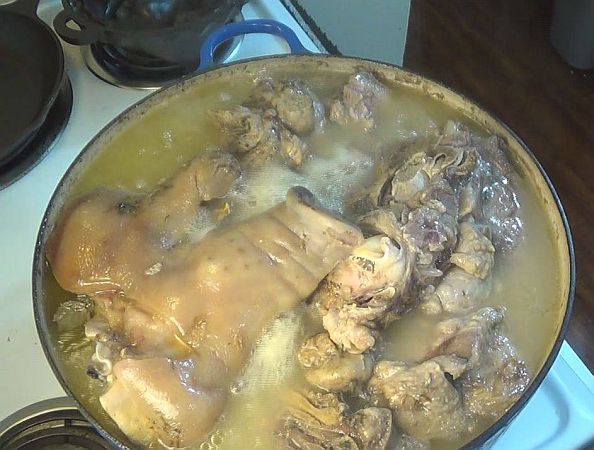 When ordering the pig head, ask the butcher to cut it into quarters. (You could certainly break or cut up the head yourself if you want.)

Cut up the mirepoix vegetables (celery, carrots, onions, garlic) into large pieces. Peel the onions and garlic cloves. You don't have to peel the carrots, but of course cut off and remove the ends. Place them into the pot. Add bay leaves, parsley, thyme, peppercorns. Place the pieces of pig head into the pot, plus pig's feet and any other pig parts. Add enough water to cover everything. Cover the pot, and bring the water to a boil. When the water is at a good boil, lower the heat to a gentle simmer. Simmer for a long time – at least three hours, but five or six hours would be better.

As the meat boils, an ugly, fatty foam will accumulate on top of the water. Every so often, about every half hour, use a strainer to skim this scum from the surface, and discard it. There will be a lot of fat mixed into the water – which will now become broth – and this is what will be used to bring everything together, mold and shape the finished brawn.

After gently boiling for several hours, the pig head will reache the point where the meat is falling apart, in the same manner as a pulled pork. From here, move the pork into a huge bowl, then strain the pork broth through a screen or cheesecloth. Bring the broth back to a boil on the stovetop, and boil for about an hour to reduce the liquid and concentrate the fat in the broth.

As the broth is boiling, go through it to separate the meat from all of the bones, fat, and inedible parts. This will produce a surprising amount of cooked pork, easily a two or three pounds or more. Discard the extra parts. Some dishes could use the extra pork fat; and you may have other uses for the bones, but they're finished here and won't be used as part of this dish.

When the broth is ready, turn off the heat. Ladle about a cup or so of the broth into the bowl of meat, and mix it together to give the meat a very moist texture. The meat should have the consistency of mash, and it can be stirred like a very thick mash. 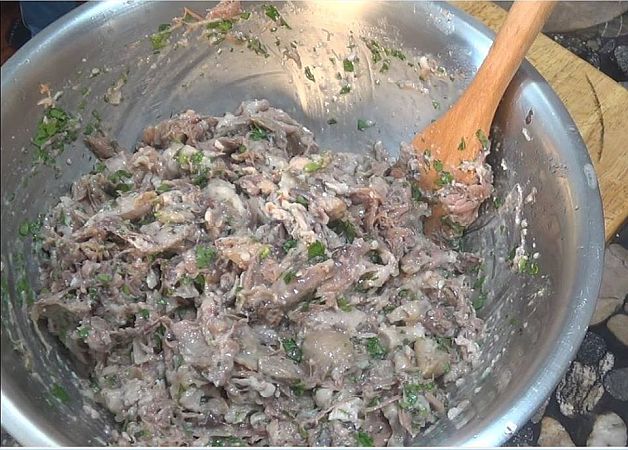 Grind any spices that require grinding, so they can be added to the dish at the same time as other flavorings. Add your spices to the meat and mix them all together. Again, it's important to be bold with the spices and use your favorite spices for pork. This will really kick it up a notch and turn this bowl of meat into something wonderful.

Line the insides of your molds (bowls, pig head mold, cake pans, or whatever you are using) with plastic wrap. This will help to prevent the brawn from sticking when removed from the mold.

With a ladle, scoop as much meat as possible into each mold. Then, add extra "pig glue" (broth with lots of fat in it) to each mold. Cover the top of each mold in plastic, and place a weight on top to press it down. Place the molds in the refrigerator and let them settle overnight, or as much as 24 hours. 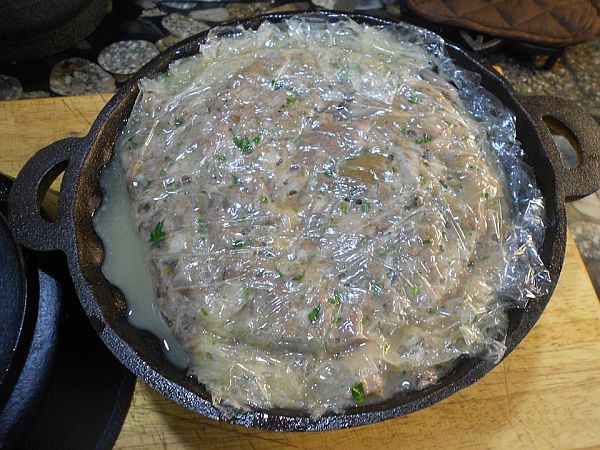 After chilling in the refrigerator overnight, we have brawn! The pig head shaped it nicely, and it wasn't too difficult to remove from the mold.

(Cleaning up the kitchen, I found myself scraping the pot like a kid licking a bowl of frosting. I couldn't believe how tasty this was.) 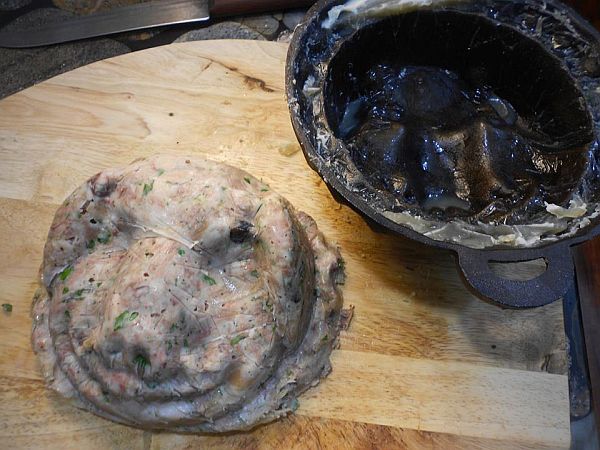 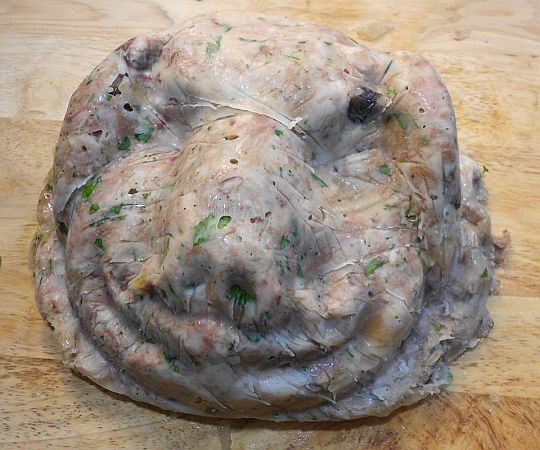 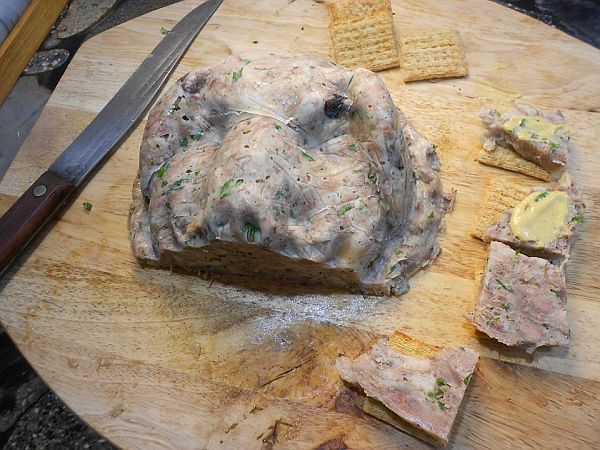