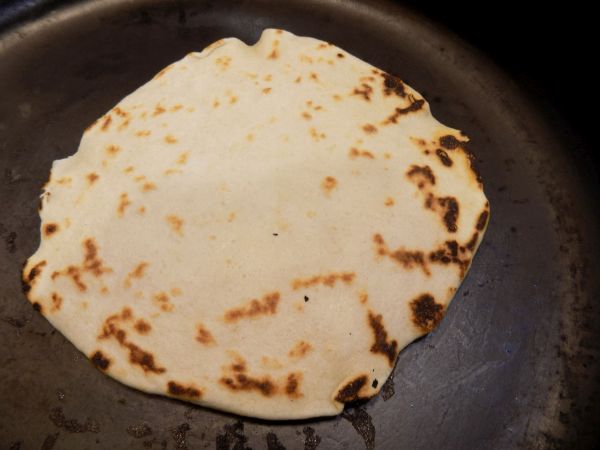 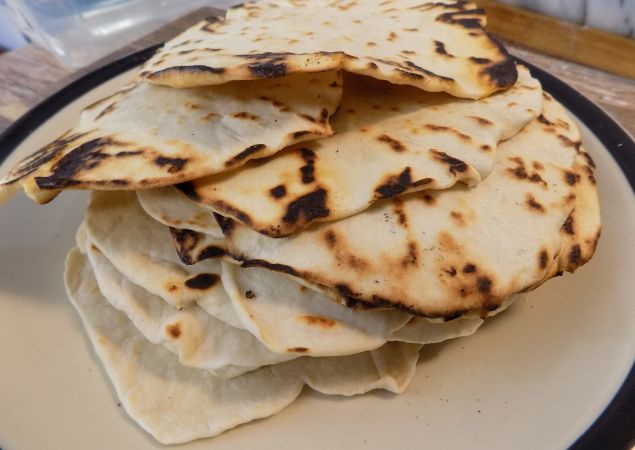 As with most attempts at cooking something for the first time, making homemade tortillas has been a learning experience.

First of all, I learned a cast iron tortilla press only works with corn tortillas. Flour tortillas will shrink immediately when you're finished pressing them, or rolling them out, even before you place them in a hot cast iron skillet. And the reason shy this happens with flour tortillas is because of gluten. Gluten makes them elastic, and because of this a cast iron tortilla press will only give you a tiny micro tortilla. Also, it's too thick. So, a rolling pin is absolutely necessary for making flour tortillas. The recipe said to flatten the tortilla to "about an eighth of an inch thick." Let me say "no way" to that. Rather, a flour tortilla needs to be rolled out to where it's practically paper thin, and a couple of inches wider than your target size. Because it shrinks, and it puffs up when added to the pan, a paper thin rolled-out tortilla will cook in a hot cast iron skillet in under a minute, and produce a tortilla that's less flexible and soft than the ones you buy at the store. However, the important part is the taste. The taste is far better and less bland than a store bought tortilla – especially when you go the traditional route and mix in lard with your flour, salt and baking powder. For these reasons, I'd call this batch of tortillas a success.
Pans needed: A rolling pin for flour tortillas, or a cast iron tortilla press for corn tortillas. Also, a cast iron skillet of 10 inches or larger diameter. A comal is traditional for cooking tortillas, but a cast iron pan is possibly the world's best comal. An airtight container, such as a Tupperware container, to hold the balls of dough and also store the finished, cooked tortillas.

Add dry ingredients to a large bowl: flour, salt, baking powder. Whisk them all together. Add lard (or other oil), and mix it into the flour mixture until it has the consistency of a pie crust: some large pieces and a lot of tiny pieces or grains.

Many recipes for mixing dough say to add the liquid a little at a time. Here it's necessary to add the water all at once, and immediately mix it all with a form or with your hands until a dough forms. Lay the dough out onto a floured work surface, and knead the dough for several minutes until it is soft and pliable. Roll it all into a ball. At this point, you can either place the ball into an airtight container, or cover it with a damp towel, and let it rest for ten minutes. This is to let the dough relax and become pliable.

While the dough is resting, place a large cast iron skillet on the stovetop, and heat at medium for at least ten minutes.

After ten minutes, divide the ball of dough into 12 pieces. Place the dough balls back into the airtight container, and also let them rest.

I tried using a cast iron tortilla press to make flour tortillas. The end result was partially successful: it produced tiny tortillas, maybe 4 to 5 inches in size, which were thicker than a tortilla should be. The reason why this happened is because flour tortillas will form gluten, and the gluten will make the tortillas shrink when they're added to a hot skillet or comal. Because of this, the tortillas have to be rolled out to a large size. This makes it necessary to use a rolling pin when rolling out tortillas.

Dust your work surface with flour, and also rub flour onto the rolling pin. To roll a tortilla into a round shape, it's important to use a pattern: after each roll of the rolling pin, turn the tortilla about "one quarter turn" in one direction. Obviously, keep turning the tortilla in the same direction with each turn. Roll and turn, roll and turn, and keep repeating until the tortilla is about 8 to 10 inches wide. When it hits the hot iron surface, it will shrink to maybe 6 to 8 inches in size. This is why the rolled out tortilla has to be larger than the cooked tortilla. 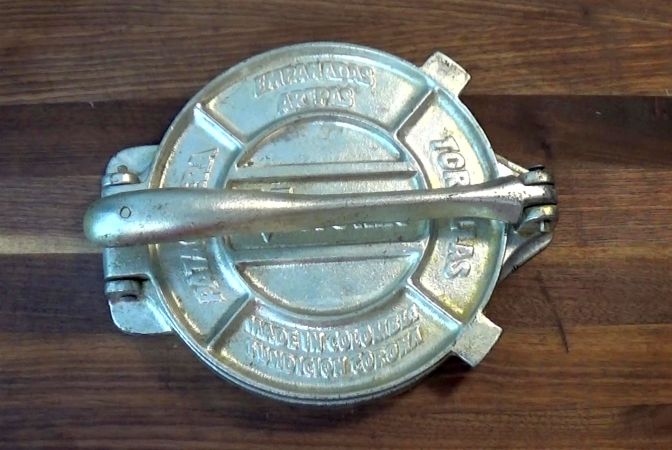 To use a tortilla press (preferably a cast iron tortilla press!): take a quart-sized Ziploc bag, baggie, or other plastic kitchen bag. Cut off the sealing end, and cut the rest of the bag open so it becomes one big, long sheet of plastic. Open the tortilla press, place the sheet in the press. Add one dough ball to the center of the press, resting on the plastic. Fold the plastic over the top of the dough ball. Press down with the press, and it will become a flat, wide tortilla. 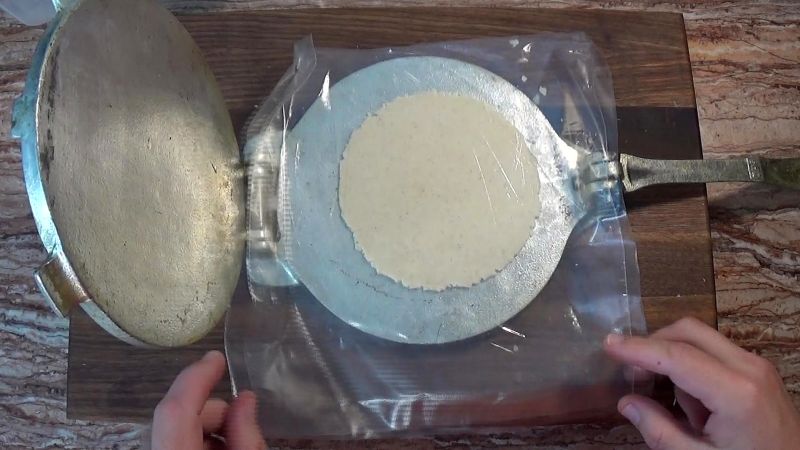 At this point the cast iron skillet should have a surface temperature of about 500 degrees Fahrenheit. Place the tortilla onto the hot, dry cast iron surface. Let it cook for about 30 seconds. The tortilla will quickly bubble and have a little bit of char on the underside. Flip it over and cook it for another 30 seconds. Using tongs, take the tortilla out of the pan and place it into a storage container or tortilla warmer. Especially if you've grown up eating corn tortillas, you'll find that making these yourself produce some tortillas that are tasty, savory, and something to be proud of…as well as delicious! 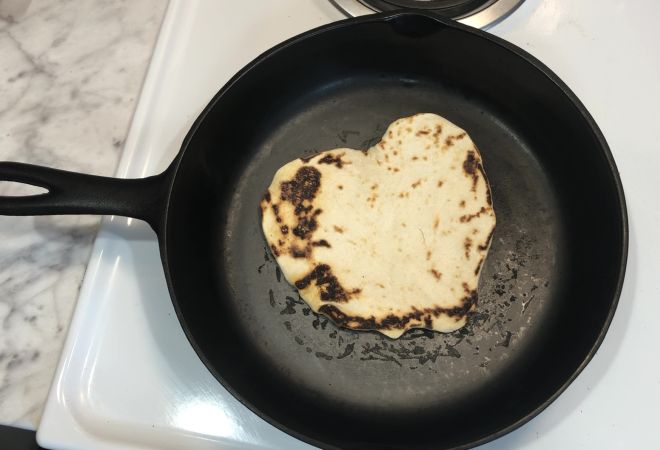 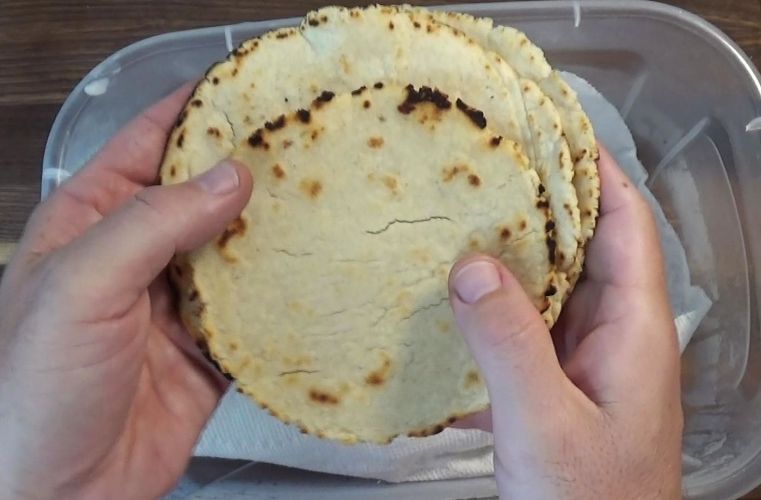