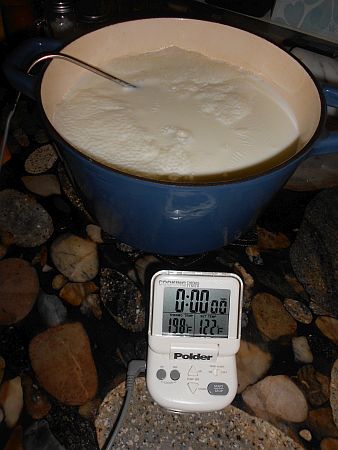 Making a batch of homemade yogurt, by slow-cooking milk in a cast iron enameled dutch oven. This actually turned out to be very easy.

Heat 1/2 gallon whole milk in the dutch oven on the stovetop, at low-to-medium heat, to just under boiling. I set my probe thermometer to alarm when it reaches 195 degrees Fahrenheit, then take it off the heat and place it on a trivet to cool. Let the milk cool to about 110 degrees F. Stir in 1/2 cup active yogurt. Place the dutch oven in the oven, with the cover on. Let it rest in the oven with the heat turned off and the oven light turned on, and let it sit anywhere from four hours to overnight. Next morning, strain the yogurt through cheesecloth. Store your yogurt in a sealed container, such as a Tupperware, and place in the refrigerator. Let it chill for several hours. The excess liquid (whey) can be stored in a separate container or jar, also in the refrigerator.

For the cost of a half gallon of milk ($1.80 to $2.00) and half a cup of Greek yogurt, this gives about two quarts of yogurt. It's great for many things, including mixing in with sugar and fruit and making yummy frozen yogurt. Also, plain or Greek yogurt makes an excellent substitute for sour cream. If you don't tell anyone, they would never know you're serving yogurt rather than sour cream.

Meanwhile, the liquid whey can be used as a buttermilk substitute in any recipe requiring buttermilk, such as cake or cornbread.