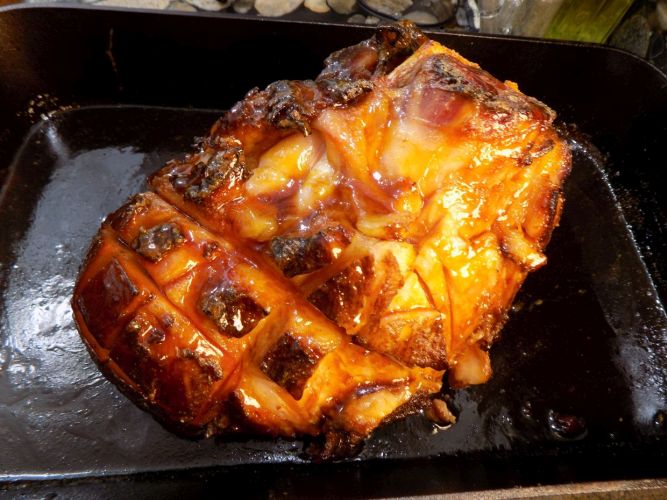 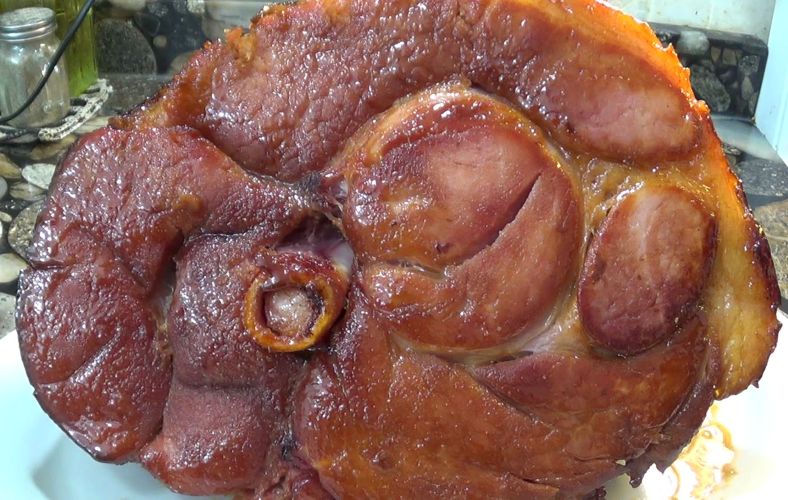 Ham is a traditional centerpiece served in the United States during major holidays, especially Easter and Christmas. This is when the local supermarket often huge bone-in cooked ham at 55 cents a pound, and that was an offer I couldn't pass up. So, we had some fun preparing a honey glazed ham in the Lodge cast iron fish pan. The entire dish only took about two hours from start to finish, and that included preparing the ham. Almost certainly, this went so fast because we added cast iron to the recipe.

Pans needed: A large cast iron pan, either a skillet or a dutch oven, large enough to comfortably fit the ham with some space left over. Bowl for preparing ingredients.

Preheat the oven to 350 degrees Fahrenheit. On the stovetop, preheat the cast iron pan. Place the pan on the stovetop burner (or more than one burner, if the pan is too big for one burner), and heat on medium setting while the ham is prepared. This will make the pan hot enough to sear the ham.

Remove the skin from the pineapple. Save the pieces of pineapple rind, because we will be cooking these pieces along with the ham. Cut the inside of the lineapple into large slices.

Score the ham, running the knife in a criss cross pattern across the skin.

With a little oil in the pan, sear the ham on all sides. Turn off the heat. Don't drain the grease from the pan, leave it in the pan.

(USDA meat cooking recommendations state pork is safe to eat at 145 degrees Fahrenheit. If you want to cook it to a higher temperature, you can certainly do so.)

Remove the pan from the oven, move the ham to a serving plate. As the ham is resting, baste it with the pan juices. Serve after resting the ham for ten minutes.