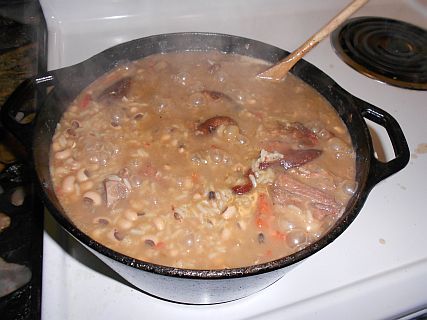 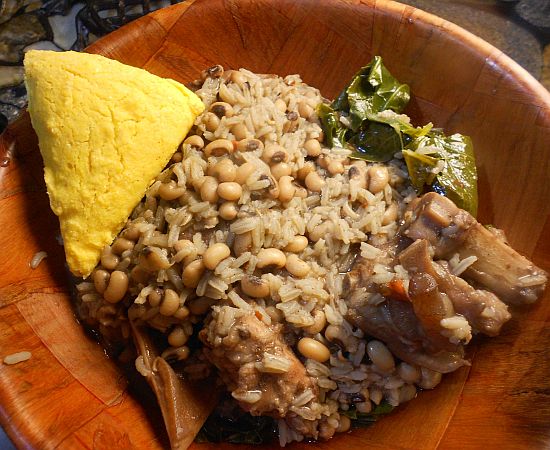 This dish is traditionally eaten in the American Deep South on New Year's Day, and the reason why clearly makes this a bit of cooking magic: it's meant to bring luck and prosperity during the coming months. According to the tradition, Hoppin' John's three main courses each have a certain meaning: a stew of black-eyed peas, pork and ham hocks and jowls, and rice all cooked together, with the peas meant to symbolize coins or pennies being granted to the dinner guest. (In some households, coins are left under the dinner bowls to be discovered while eating.) Collard greens and kale are served to represent the green color of paper money, and Southern style cornbread accompanies it to represent the color of gold. All this comes together in a wish for wealth and prosperity to the household.

Allegedly, the historical facts on the origin of Hoppin' John are less colorful: in the days of the American Civil War, Union troops swept through the South, confiscating crops and livestock to use as provisions for their troops. Southerners who weren’t off fighting were left with precious little, save for peas and greens. The Union soldiers considered “field peas” (black-eyed peas) and greens to be fit only for animal fodder. These dishes became cherished and appreciated for having saved many a family from starvation during those times, and the tradition of celebrating these dishes with the New Year was born.

While any pork or ham can be used in the preparation of this dish, "leftover" pork pieces such as ham hocks and hog jowls are seen as the best ingredients. These can be found in the meat department of most supermarkets; and if you live in an ethnic neighborhood where there are food markets catering to Latin American palates, then you should be able to find these pork parts in abundance at a low price.

Preparation time: 2 hours and 15 minutes (15 minutes to prepare the stew, plus about two hours to cook)

This dish is traditionally served with Skillet Cornbread as a side.

The day before preparing this dish (New Year's Eve), pour the beans into a medium-sized bowl, and add enough water to cover the beans, plus an inch or two of water above the top of the beans. Cover the bowl with plastic wrap, and set it on the counter to soak overnight. (Letting the beans soak at room temperature will allow them to absorb water better than placing the bowl in the refrigerator.)

The next day, simply pour the entire bowl of beans and water into a large pot or dutch oven. Add pork pieces. Dice onion and add to the pot. Dice red pepper, and add that to the pot as well. Add red pepper flakes, salt and pepper to taste. Add enough chicken broth to the pot to cover everything; if more liquid is needed, you can add water or more broth. Cover the pot and bring to a boil. Lower the stovetop heat, and simmer the pot for 90 minutes (1-1/2 hours).

After the peas and pork have stewed about 1 hour, preheat the oven and begin preparing your Skillet Cornbread. This will allow the cornbread to be hot out of the oven, just prior to serving the main course. You'll be able to let the cornbread cool for a few minutes and serve it at the same time.

After about 85 minutes (just a few minutes before the 90 minute mark of stewing the peas and pork), add your greens to a separate saucepan. Add 1 tablespoon of butter to flavor the greens. (The greens are better when cooked separately from the peas and pork – they retain their flavor when mixed in later.) Bring the pot to a boil.

After 90 minutes of stewing, stir uncooked rice into the pot of peas and pork. Add more water to cover everything, if needed. Cover the pot and let it all simmer for another 25 minutes, until the rice is soft.

Serve in bowls. Add greens to each bowl first, then cover and fill the rest of the bowl with stewed peas, pork and rice. Mix it all together. Serve with cornbread as a side. 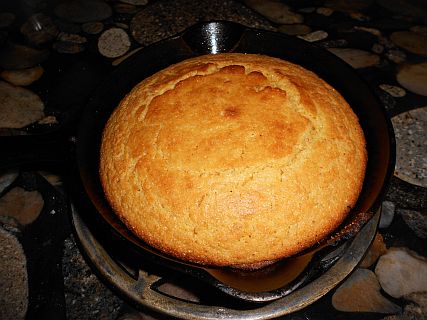