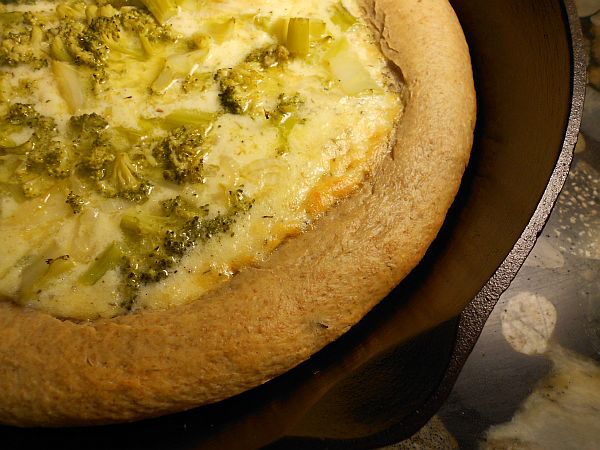 Avengers: Age of Ultron may have been a fun movie, but this summer I fell in love with Pixar's Inside Out. I was so touched and delighted by the film, I found myself with an urge to re-create the sight that gave nightmares to young Riley: the horrifying broccoli pizza she and her Mom found on the day they moved into their new home. Now, I may be strange in that I've loved broccoli all my life; when I was very young, Mom got me to eat it by saying I was a giant eating "little trees." So, the prospect of a vegetarian pizza with broccoli didn't exactly scare me into disliking the movie. However, as an amateur cast iron cook, I'm always interested in trying new foods and new recipes. I know that for some people, "broccoli pizza" is something completely alien.

I did this the hard way, rising the dough all day for the crust and preparing the ingredients from scratch. If you want to use shortcuts such as store-bought pizza dough and/or jarred alfredo sauce, feel free to do so. After all, it's your pizza. 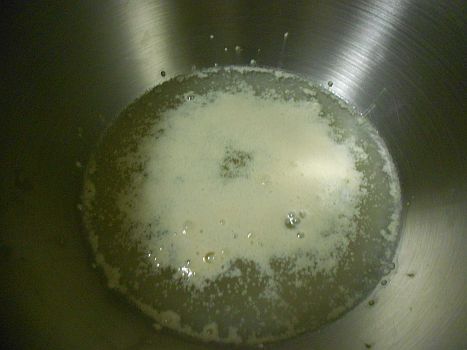 Many dough recipes say to use piles and piles of yeast, ranging from "a whole package" to multiple tablespoons. This was only one half teaspoon of yeast, mixed with 2 teaspoons of sugar and 1 1/4 cups of lukewarm water. After ten minutes, it was blooming nicely. I've been told that's too much sugar, also, and that the amount of sugar should match the amount of yeast. I feel the extra sugar gives more sweetness to the dough, though you can certainly try this with only a half teaspoon of sugar as well. Even though it takes a few hours to rise, homemade pizza dough is worth the effort. The store bought dough may only cost 99 cents a bag, but you can't do what was done here: mixed in one cup whole wheat flour with a cup and a half of all purpose flour, two teaspoons kosher salt, and two tablespoons each of corn oil and extra virgin olive oil. As the dough ran through the mixer, garlic powder was added, along with crushed rosemary and melted butter. 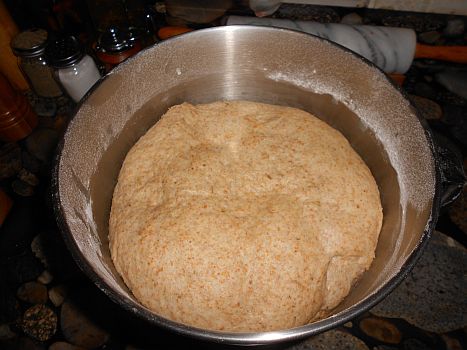 After mixing it all together, cover bowl, and let it rise for five hours.

Coat cast iron pan with extra-virgin olive oil. Plop the raised dough into the pan, and shape it into a crust. Cover and let stand another two hours, so the dough will rise still more while in the pan. 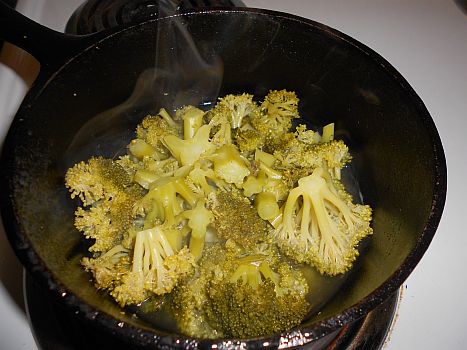 After the dough has been in the pan one hour, with one hour to go, begin preparing the pizza toppings. Cut broccoli into medium pieces, steam or boil it in salted water for 45 minutes, then drain and let it sit for another 10 minutes. 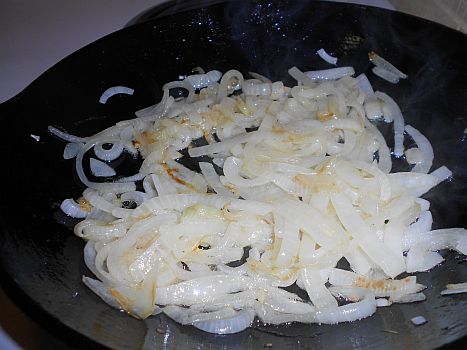 Slice onion into half-rings (long, thin strips), and saute them in a cast iron skillet with olive oil and butter to caramelize the onions. 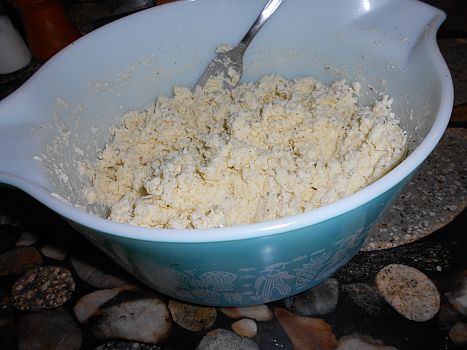 I didn't want the cheese sauce to be liquid, because it was going to go into a 500 degree oven and melt there. It was simply necessary to mix the cheese together in a large bowl, adding cream to give it a consistency similar to cottage cheese. From there, mix in spices. 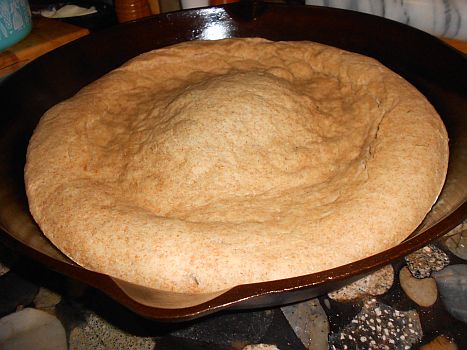 At this point, the pizza dough needed to be punched down and shaped into a deep dish pizza crust. The crust was baked in the oven by itself at 500 degrees F for seven minutes. Then, the toppings were added: coat the crust with olive oil and brush it over the crust. 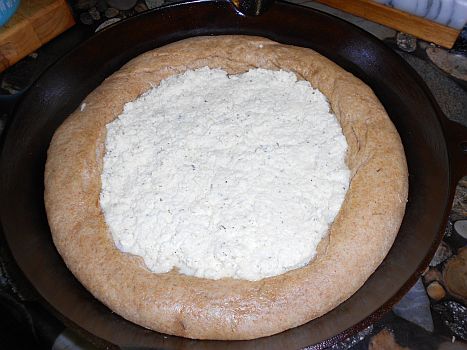 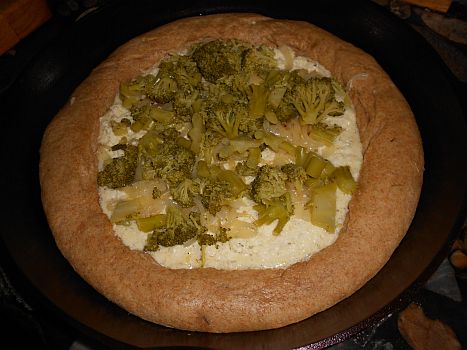 It was only a matter of adding the cheese, then topping with caramelized onions and the broccoli. Then, the pizza was baked for 15 minutes at 500 degrees F. 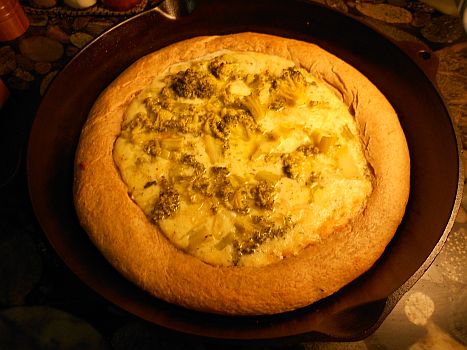 After coming out of the oven, let the pizza sit in the pan for another five minutes, to finish baking the underside of the pizza. 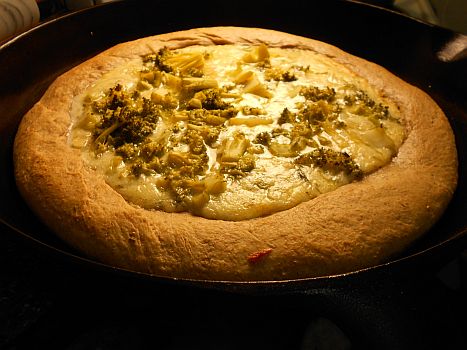 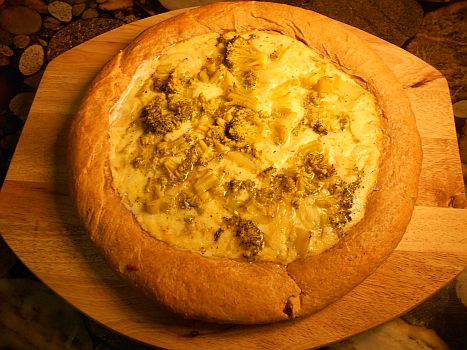 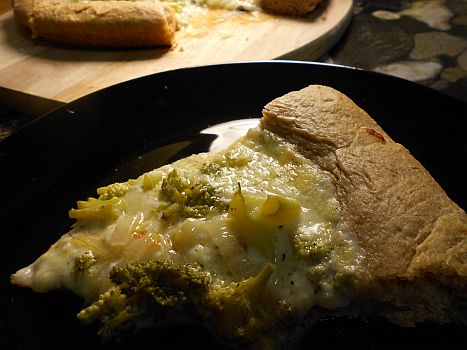