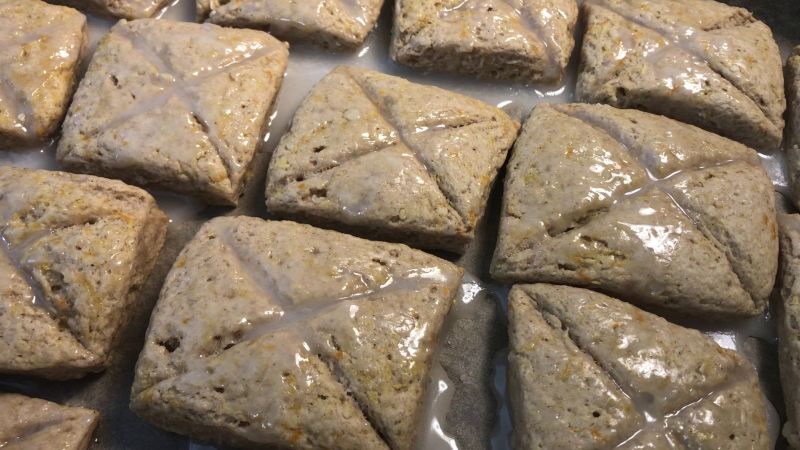 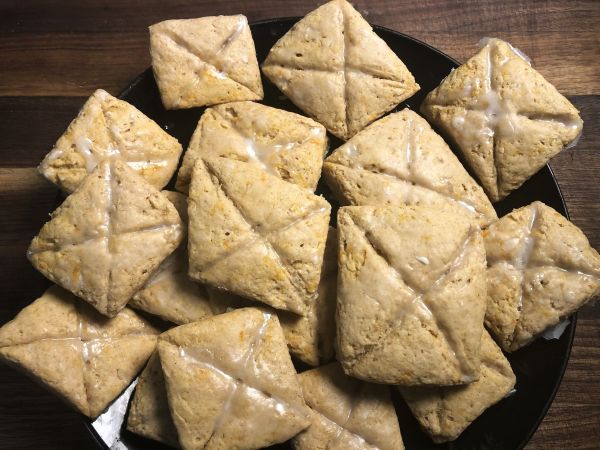 The Waybread of the Eldar

In January of 2020 I read that J.R.R. Tolkien's son, Christopher Tolkien, had passed away at the age of 95. That was some touching news, because I've been a hardcore fan of Tolkien for nearly my entire life. The Lord of the Rings has been a phenomenon for three-quarters of a century, but if Christopher Tolkien hadn't spent the later half of his life editing and publishing his father's writings, we wouldn't have been able to experience the Quenta Silmarillion, the mythology and the legends that gave so much depth to these tales, and made them much more than sword and sorcery adventure stories.

J.R.R. Tolkien was a major influence on my life and my hobbies, and the sigil I use for this Web page, Cast Iron Chaos, is based on the Tengwar of Feanor. And so, I set about making a tribute to Tolkien, by baking lembas, the waybread of the Elves. There are quite a few YouTube videos in which fantasy fans make their first attempt at baking, and they dress up in Ren-faire garb and bake their own versions of "lembas bread." And now I've joined their ranks, with yet another YouTube video on making Lembas.

What does it taste like? I found this recipe produces a pastry that resembles a scone with a citrus flavor…and that may very well be realistic. The finished waybread looks rather plain, but this also in accordance with Tolkien's description of these cakes: when Gimli the Dwarf first saw lembas, he thought it was ordinary cram, but he was quite surprised at how delicious it was. He compared it to the honey cakes of the Beornings, and that certainly suggests this had more of a sweet flavor than cram. You might even say the inclusion of citrus in this may help to prevent scurvy, which was also something travelers in the ancient days had to contend with. Meanwhile, after existing on lembas and nearly nothing else during the final days of their journey across the plains of Mordor, Sam Gamgee and Frodo Baggins found their appetites "filled with the memories of food, and the longing for simple bread and meats." While lembas sustained them and helped give them the hope to move on, its taste was exotic and sweet to the point where basic, plain foods were all the more appetizing because they were not available. All this suggests lembas had a sweet taste that was not the same as eating simple rations of bread, meat and basic vegetables. I hope this recipe for lembas gives a wafer with similar taste and flavor. 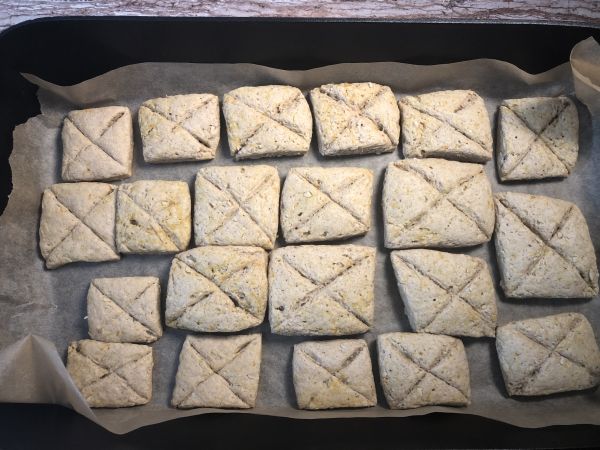 Preheat oven to 350 degrees Fahrenheit. (I reduced the temperature from the original recipe.) Crush pine nuts with a food processor (or a mortar and pestle), and set aside (reserve) for use later.

In a large bowl, mix together dry ingredients (flour, baking powder, salt) into a large bowl. Use a whisk to incorporate air into the dry ingredients (this is an important step). Add the butter and mix with a fork or a pastry cutter until the mixture resembles fine granules.

Add sugar and spices (cinnamon, cardamom, mace), and mix them thoroughly into the mixture. Zest the rinds of an orange and a lemon, and add it to the batter. Add milk and honey, stir them until a thick dough forms. Add crushed pine nuts and mix into the dough.

Roll the dough out about 1/2 inch thick.

Using a pizza cutter (or a knife) , cut out 3-inch squares. Move the dough to a baking sheet. Make a Criss-cross or X pattern on each square from corner to corner with a knife.

Bake at 350 degrees Fahrenheit for about 20 to 25 minutes until lightly golden.

In quite a few fantasy stories there are great feasts with roasts, cakes, and pastries; yet in The Lord of the Rings, The Hobbit and The Silmarillion these grand banquets are never seen (except for the beginning chapter of The Hobbit, when Bilbo Baggins' pantry is emptied to feed fifteen unexpected guests). Instead, the heroes embark on their journeys with rations to last for many days (and they tend to run out of these quickly), especially "waybread." In The Hobbit, Bilbo and Dwarves have to rely on a dull and monotonous ration called cram to survive, which they refer to as "more of a chewing exercise" than any kind of food to be desired. At one point Bilbo muttered to himself, "…and cram is beginning simply to stick in my throat." However, In The Lord of the Rings, the Fellowship of the Ring is given a rare gift by the Elves of Lothlórien: lembas, the waybread of the Elves. This Elven ration would serve them well and played a key role in several points of the story, especially when Frodo and Sam were struggling through the barren lands of Mordor in a desperate attempt to reach the Cracks of Doom.

There's an important reason why Tolkien's characters journeyed and ate in this manner. Tolkien himself served in World War I and saw action during the Battle of the Somme (one of the most horrific battles in history, which lasted for four months and claimed over 1 million lives lost on both sides), and he began writing The Silmarillion in the hospital, recovering from trench fever. As a soldier, Tolkien frequently lived on military hardtack bread, which he brought into his stories as cram, It was inevitable he would invent a fictional ration for travelers that would be much more desirable and edible, one that would nourish the soul as well as the body. Because of this, fans of Tolkien's works have gone out of their way to recreate this mystical food, which was described by Gimli the Dwarf:

In the morning, as they were beginning to pack their slender goods, Elves that could speak their tongue came to them and brought them many gifts of food and clothing for the journey. The food was mostly in the form of very thin cakes, made of meal that was baked a light brown on the outside, and inside was the colour of cream. Gimli took up one of the cakes and looked at it with a doubtful eye.

'Cram,' he said under his breath, as he broke off a crisp corner and nibbled at it. His expression quickly changed, and he ate all the rest of the cake with relish.

'No more, no more!' cried the Elves laughing. 'You have eaten enough already for a long day's march.'

'I thought it was only a kind of cram, such as the Dalemen made for journeys into the wild,' said the Dwarf.

'So it is,' they answered, 'But we call it lembas or way bread, and it is more strengthening than any food made by Men, and it is more pleasant than cram, by all accounts.'

'Indeed it is' said Gimli. 'Why, it is better than the honey-cakes of the Beornings, and that is great praise, for the Beornings are the best bakers that I know of; but they are none too willing to deal out their cakes to travellers in these days. You are kindly hosts!'

'All the same, we bid you spare the food,' they said. Eat a little at a time, and only at need. For these things are given to serve you when all else fails. The cakes will keep sweet for many many days, if they are unbroken and left in their leaf wrappings, as we have brought them. One will keep a traveller on his feet for a day of long labour, even if it be one of the tall Men of Minas Tirith.'

– The Fellowship of the Ring, chapter 8, "Farewell to Lórien"