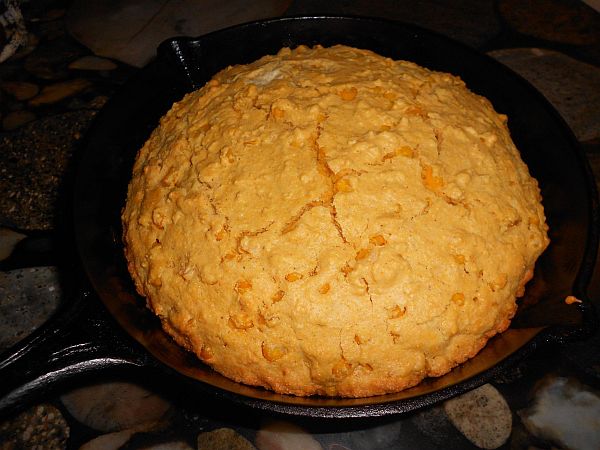 If you say this is cornbread, you're right. It's called "mielie bread" or "mealie bread." Basically, it's a South African cornbread recipe, using sweet corn. Sadly, I don't think the author of this recipe ever made cornbread the way it's supposed to be made: in a cast iron skillet. South African or not, it's not cornbread if it doesn't sizzle when you add the batter to the pan. This produces a savory cornbread with a bit of sweetness. It's nothing like the cake-like "cornbread" served at most restaurants. This kind of cornbread is best eaten with lots of butter on top.

Place cast iron skillet into the oven, and preheat the oven and pan to 350 degrees Fahrenheit. When the oven reaches 350 degrees, add oil to the hot pan and return it to the oven to heat the oil.

Add dry ingredients (flour, cornmeal, sugar, baking powder, salt) and mix together. Mix in an additional 1/2 cup of milk, to moisten the batter and make it easier to stir.

Don't drain the water from the can of corn kernels. Mix in the entire can of kernels plus water. If you're using fresh corn rather than canned, add 1/4 cup of water to moisten the batter.

Add batter to the hot cast iron skillet (with oil), and watch it sizzle as you add the batter.

Bake 45 minutes at 350 degrees, or until a toothpick comes out dry when testing.

How does it taste? It has a mild, savory taste that definitely has the corn as the centerpiece. You could eat it with butter, like Southern cornbread. Or, mix it in with a dish such as stew or soup.