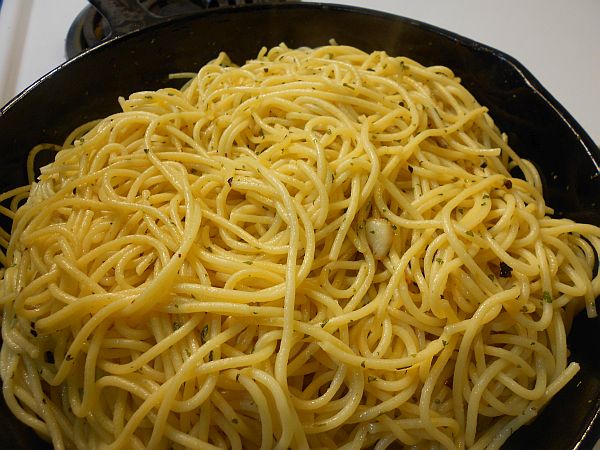 For most of my life, I would have told you I couldn't cook to save my life. Ask my Mom, and she'll tell you a story of the time I supposedly burned spaghetti, while it was still boiling in the pot. I was the type of klutz in the kitchen who wasn't even able to boil water. What's more, there are many people across the country who declare themselves at this level – without realizing how truly easy it is to develop and master basic cooking skills.

Now, it's easy to think boiling pasta is such a basic skill that anyone can do it. But here in United States, it's assumed there are only two things to know about making pasta: boil it in a pot of water, then drown it in sauce. But for those of us who may be on a low budget, there comes a time when we run out of pasta sauce, and we're stuck with boiled pasta until we can afford to buy a jar of sauce. And so, because there are a lot of people in this situation, here are a few basic tips on to boil a good pot of pasta.

In addition, we'll also be preparing a dish to help solve the problem of what to do with all those boxes of pasta, when you're out of sauce and you're on a low budget. We'll be making a very simple and basic pasta dish that's a delicacy in Italy: pasta aglio e olio. That translates to "pasta with garlic and oil," and that's all we need for this dish: some cooked spaghetti, four cloves of garlic, and olive oil.

How To Boil Pasta

The essential item needed here is a large stock pot with a lid. This can be cast iron. stainless steel, aluminum, enameled, or what have you. A general guide to follow would be to have a stock pot that can hold 4 quarts of water for every pound of pasta.

Fill the pot with hot tap water, about two thirds of the way full. Cover the pot before taking it to the stove, so the water won't spill.

From here, add salt to the water. There's a common saying when cooking pasta, the water should taste like sea water. That's actually a bit TOO salty, and for most kitchens, a simple rule of thumb is to use about one teaspoon of salt for every quart of water. This means an 8-quart stock pot would usually have about six quarts of water. To this we would add two tablespoons (six teaspoons) of salt; while a 12 quart stock pot would hold about nine quarts of water with three tablespoons of salt; and so on. 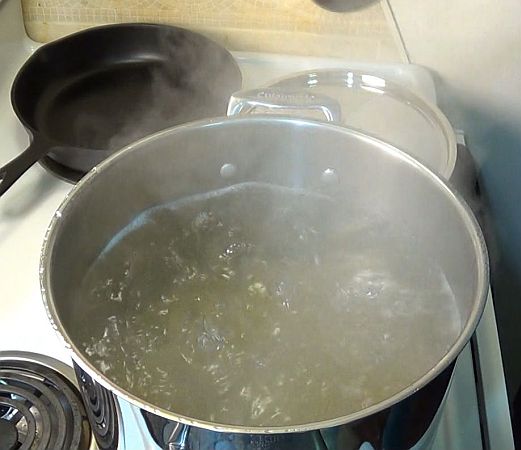 Cover the pot, and set the temperature to about three fourths high. Especially on an electric stove, never turn the stovetop burner up all the way. The burner on an electric stove can reach as high as 1200 degrees Fahrenheit or more, and that's enough to warp a steel pan, or even a cast iron pan. So even if the recipe calls for heating the stovetop on high, do not turn the burner to more than 3/4 of maximum. Even when the heat is turn up to that level, the water will still come to a rolling boil in 15 to 20 minutes.

As the water is heating, peel and thinly slice four cloves of garlic.

When cooking a long pasta like spaghetti or fettucine, we often see people breaking it in half before adding it to the water. There's no point in this, because there's plenty of room in this big pot to cook the spaghetti as it is, with long strands. So, skip snapping it in half.

When the water is at a good rolling boil, simply place the spaghetti into the water, and gently stir it in. The pasta immediately begins to soften as it stirs, so it will be completely covered by the water. At this point, cover the pot to bring the water back to a boil. But don't leave the pot covered for more than a minute, or else you might see a boil over. 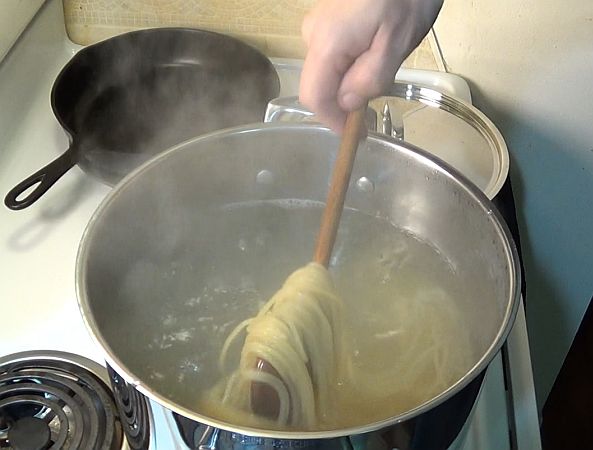 At this point, place a cast iron pan on the second burner, and turn it up to low-medium heat (about 3 to 4 on a 1-to-10 burner). Cast iron heats up very slowly, so placing it on the burner now, while the pasta is cooking, will give it plenty of time to gradually heat the entire pan and make it hot enough for cooking. Also, the temperature MUST be no more than low to medium heat on your stovetop burner. We don't want the garlic to instantly cook and burn, by using a pan that's too hot.

The pasta has to be stirred constantly, taking breaks of no more than a few seconds, so as to be sure the pasta doesn't stick. Don't bother trying to follow the time given on the package. Instead, after a few minutes, we have to start tasting the pasta to be sure it has the right consistency. When the pasta is soft and not stiff, but it still has a bit of a chew to it, we know it's al dente.

Drain the pasta into a colander. After draining, DO NOT rinse off the pasta. 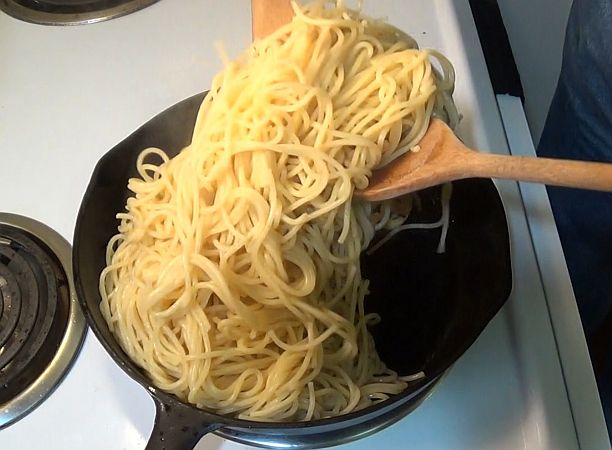 Now that the pasta is ready, it's time to put our cast iron skillet into action. Coat the surface of the pan with olive oil, and begin sauteeing the sliced garlic. We only only want to fry the garlic until they just begin to brown, and this only takes a couple of minutes. Add a dash of red pepper flakes and mix it in.

Top the pasta it with some grated parmesan cheese, ground black pepper and butter. 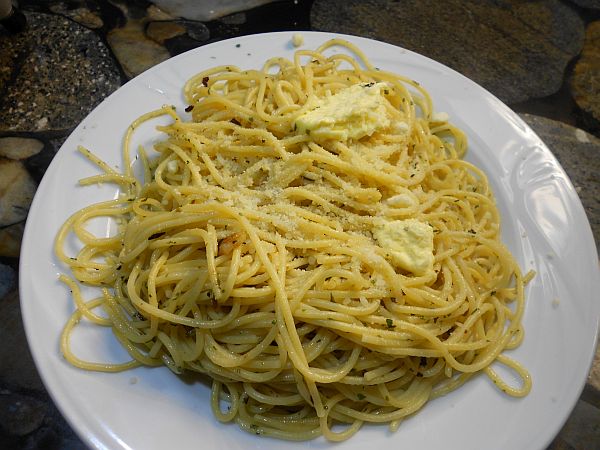