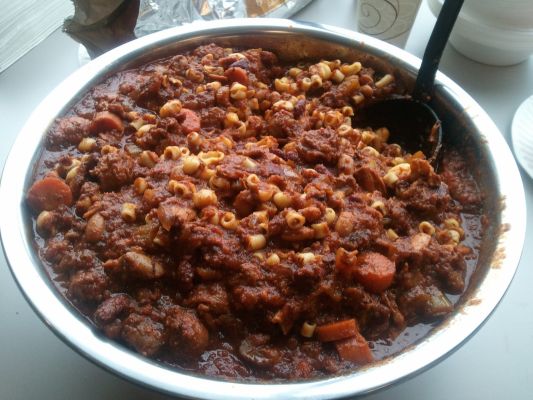 Pasta fagioli is traditionally meant to be a simple meatless dish of pasta and beans, but our society's obsession with fancy foods laden with meat sauces has made this version of the dish a staple at many tables…and restaurants. American cuisine (and franchise "Italian" restaurants like Olive Garden) has mutated it into a variation of the pasta-and-sauce dish we're all familiar with. This recipe for pasta e fagioli is based upon one that's been floating around on various Web sites. It claims to be an Olive Garden imitation recipe, and it has a lot of positive comments from people who tried it:
www.cdkitchen.com/recipes/recs/524/Olive_Garden_Pasta_E_Fagioli35471.shtml

So, I gathered the ingredients together and began building it…but as I studied the recipe, I kept thinking, "Wait a minute. I could do better than this!" I'm not being egotistical when I say that, either – some of the ingredients smacked of the typical, everyday recipes you see on Web sites all over the place. Essentially, it was a typical combination of ground beef and tomato sauce, with some additional vegetables added…but adding insult to injury, the original recipe also had "48 ounces spaghetti sauce" as an ingredient in addition to 48 ounces of canned, diced tomatoes. What's more, the recipe listed "8 ounces pasta" at the very end, after providing the ingredients for a full gallon of pasta sauce. Oh, come ON now! If you have a family recipe for pasta sauce, then you could improve on this thing. And so I took a chance, and changed it around to make it more like my own family recipe for Italian pasta sauce. (Also, I found out I was out of ground beef at that time, so I had to make do with other meats.) As a result, my take on this recipe turned out to be simpler in preparation, even if the ingredients were a bit more elaborate: 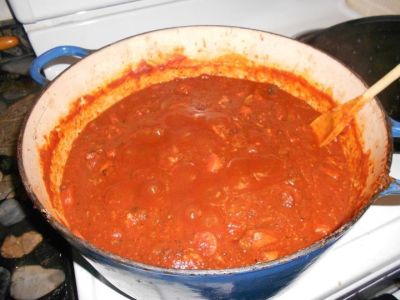 Pots needed: 2 (large enameled pot for the sauce at least 8 quarts or larger, plus a large stock pot for boiling the pasta)

The sauce is easy: in an enameled pot of at least 8 quart size or larger, slice up the pork and sausage into medium-small slices, add them to the pot, and pour the tomatoes on top. (You don't have to brown or sear the meat in advance, because it's going to slow-cook in the sauce to the point where it falls apart.) Add oregano, garlic, and salt to the sauce. Chop up the onions, carrots, and celery, and mix them into the sauce. Drain the red and white kidney beans and add them to the pot. Add beef stock, parsley, ground pepper, and hot sauce. Mix it all together. Bring the pot of sauce to a low boil, then lower the heat and simmer. Cover the pot, and let it simmer for at least three to four hours. This will thoroughly cook the meat and vegetables. The pork will come apart completely and dissolve into the sauce.

When the stew is ready to serve, prepare your pasta. Add plenty of salt to the water, at least one tablespoon for every two quarts of water (so that an 8-quart pot uses 4 tablespoons of salt). Do not add oil to the water; you'll want your pasta to stick to the sauce. Bring the water to a heavy roiling boil, then stir in pasta. Cook pasta until al dente (just soft enough to eat without being chewy). Drain the pasta in a colander. Mix the pasta directly from the colander in with the stew, and serve.