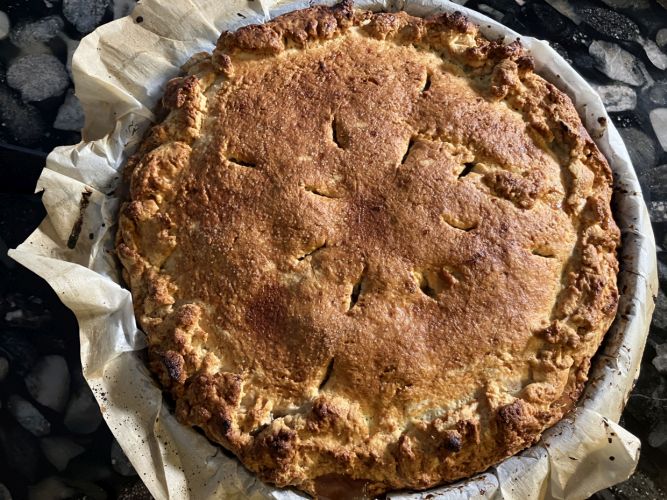 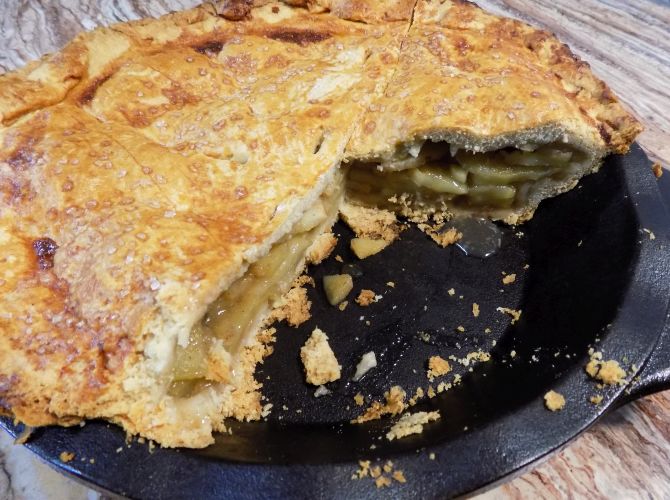 I made my first apple pie from scratch on Saturday, July 28th, 2012. I was afraid it would be a disaster, because the crust appeared to be too soft…but it was far more successful than I'd hoped for. I based much of it on Alton Brown's "Super Apple Pie" recipe from Good Eats. The pie was wonderful…but…I was re-reading the text of my pie baking pictures and thinking about the leftovers I'd had from the pie fixings – apple butter, a bottle of applejack brandy, caraway seeds (which I'd actually had on hand because they were used when I made Irish soda bread on St. Patrick's Day), and the remaining apples. I started to wonder if there was a way to simplify this process. Alton Brown's statement on Good Eats was that the most popular apple pie method we use, with cinnamon, nutmeg, allspice, cloves, and apples, produces an apple pie that tastes like a pumpkin pie and is usually very runny. His suggestion of draining the excess liquid from the apples was a good one: after all, that was my very first apple pie, and as a beginning cook I was very pleased with the way my apple pie filling turned out. But the exotic ingredients he used in the pie – apple jelly, applejack brandy, grains of paradise (or even caraway seeds), a pie bird – are not the everyday items most people keep in their pantries. Getting these ingredients especially for the pie did make this a special event; but it also meant that this apple pie is not something you can just throw together whenever you feel like it, in the manner of the common "everyday" pie that we usually make.

After doing Web research and looking for more common everyday ingredients, I settled on the following recipe. The photos here show the results:

(an exercise in cooking magic)

Pans needed: One 9-inch or 10-inch cast iron skillet, large bowl to drain apples. Using cast iron instead of a glass baking dish (or an aluminum pie plate) helps to properly bake the crust, as the cast iron retains heat and cooks the crust more thoroughly than glass or aluminum.

(One time, as a sugar-free alternative I used Splenda instead of sugar in the pie, and I discovered that Splenda does not react with apple slices the way sugar does. The apple slices did not drain.)

While the apples are draining, prepare your crust. This pie uses two pie crusts, one for the bottom and one for the top. Use the following:

The second crust will require two sheets of wax paper.

(No lard and no shortening, and no food processor. Use a mixer or even a hand-held pastry blender.)

Cut butter into pieces and add to the bowl. Use the pastry blender to work the butter into the mix. Blend until there are still chunks of butter left in the mix. 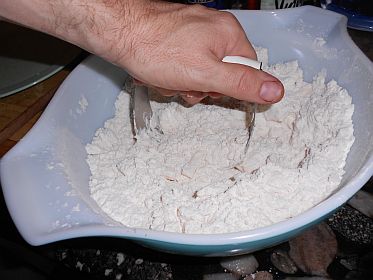 Stir in liquor until thoroughly mixed. Work at the mixture until a dough forms. Separate the mound of dough into two halves, one for the top and one for the bottom. Press both halves of the dough into flat discs (you don't need a rolling pin at this time). Place one of these discs in the refrigerator; this will be for the top crust.

Grease your cast iron skillet with a thin layer of shortening, including the bottom and sides of the pan. Take the other dough disc and press it into your pan. Press the dough all the way to the edge of the pan. 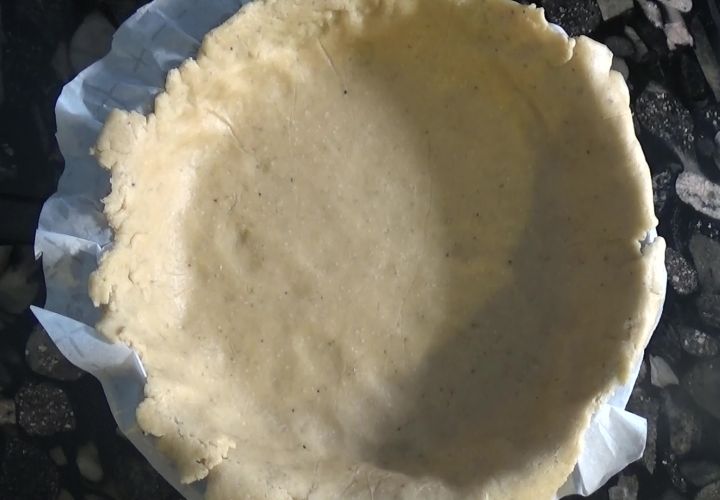 Preheat your oven to 375 degrees F.

Now, on to the filling!

Mix the following ingredients in with the apples:

Add the mixed apples to the cast iron skillet. 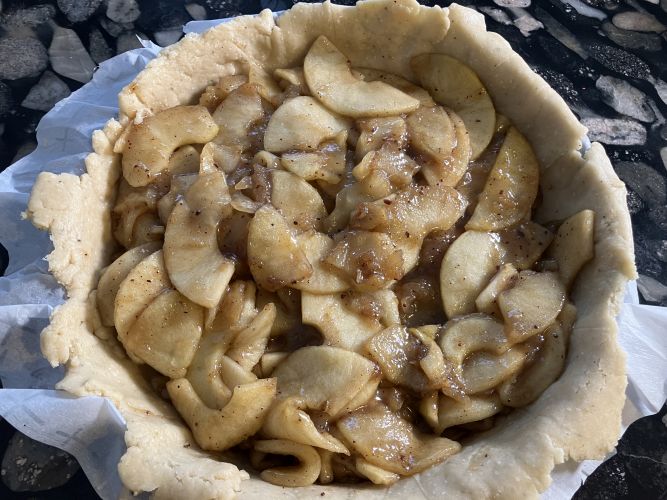 Take out the second pie crust from the refrigerator. Place the crust dough between two sheets of wax paper. Use a rolling pin over the wax paper to roll out the dough, into a sheet large enough to fit over the pie plate.

Remove the top sheet of wax paper. Lift the bottom sheet with the dough, turn it over and place the dough over the top of the apples, so that it settles over the top of your pie. Carefully peel off the sheet of wax paper, leaving the top of the pie covered with dough. Use your fingers to tuck in any dough that overlaps the edge of the pan. Open up the crust to allow steam to escape, by either cutting slits in the crust or poking at it with a fork to leave a design in the crust.

(In addition to contributing to the flavor of the pie filling, the vinegar will react with the baking powder in the crust mix, causing it to expand and thicken.) 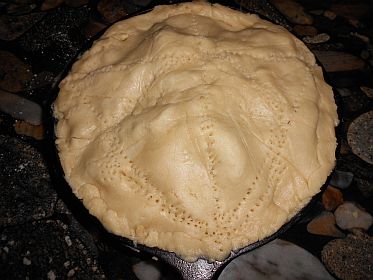 Optional Egg Wash (not mandatory, but you can make one if you want):

Use a basting brush to brush your reserved apple juice over the top of the crust, to let it soak in. If you want to give the finished pie a glaze, prepare an egg wash with cream and egg. Mix them together in a small bowl, add your reserved apple juice, and brush the egg wash over the top of the pie. Finally, sprinkle the pie with granulated sugar.

Note: If you take the time to do a lattice pie crust, it will be necessary to cover the pie top with a sheet of foil before placing it into the oven. The apples need to be steamed in order for them to soften as they bake. Bake the pie for 35 minutes with the foil cover, then remove the cover and bake an additional 20 minutes to brown the crust. (A lattice pie exposes a lot of the apples to the direct heat of the oven, and it can cause them to dry out. Covering the pie with foil helps to keep in moisture and steam the apples. With a full crust top pie, it's not necessary to cover the pie with foil.)

Place the pie in the oven, and bake it at 375 degrees F for 50 minutes. The cast iron helps bake the crust, so 50 minutes will be all you need.

Remove the pie from the oven. At this point the torture begins! It is absolutely necessary to let the pie sit and settle for three hours before cutting it open! The long wait allows the pie to gradually settle and the filling to congeal. You'll find the underside of the cast iron skillet remains very warm to the touch for a long time, far longer than it would be with a glass or aluminum pie plate.

After waiting so long, you will see why this is called a "magical" apple pie. Where is the magic? See the faces and bask in the satisfaction and delight of the people – especially the children – who will enjoy your pie. There is the magic.

A YouTube video on the making of this apple pie recipe: Magical Apple Pie

Credit for inspiration and baking suggestions used in this recipe goes to: