Birmingham Stove and Range is known for its famous cast iron cookware, produced for indoor kitchen use with its stoves. These skillets and dutch ovens have a unique design that makes BS&R cast iron easy to identify. However, For several decades through its entire existence, Birmingham Stove & Range also produced a series of outdoor cookware, including camp ovens, spiders, and even ham boilers and sugar kettles. These were produced in far smaller quantities than their kitchen cookware, and they had completely different cover designs and even sizes. After BS&R went out of business in 1992, their outdoor cast iron cookware was largely forgotten.

Despite the fact that BS&R produced a far smaller quantity of these outdoor pots and pans, there are still many of these cast iron treasures in existence. They are often mistaken for much older cast iron pots and pans – especially their cast iron spider skillets. The vast majority of cast iron spiders with legs and handles were made in the 1800s, and most manufacturers had stopped making them by the time the 1900s arrived. However, Atlanta Stove Works and Birmingham Stove & Range continued to produce spiders and camp ovens for most of the 20th century, even as late as the 1970s to 1980s. A number of these modern day pieces can still be found, and the owners of these pans may be surprised to learn they were manufactured as much as a hundred years after their estimated date of origin.

These camp ovens and spiders (officially named "camp leg skillets" by BS&R) were produced in six sizes, all with an exact measurement: 9 IN, 10 IN, 11 IN, 12 IN, 13 IN, and 14 IN. These sizes are completely different from the standard sizes of BS&R skillets and dutch ovens. Lids from BS&R's kitchen cookware will not fit onto their outdoor camp ovens and spiders. Likewise, these outdoor pieces had their own lids, which also would not fit onto BS&R's kitchen pots and pans.

Until the introduction of automated production equipment in the year 1966, BS&R made its camp ovens and skillets (also called spiders) in the same manner of their kitchen cookware. This older 12 inch spider has a lid with a regular handle. The underside of the pan has a large 12 IN mark, matching the mark on the lid. 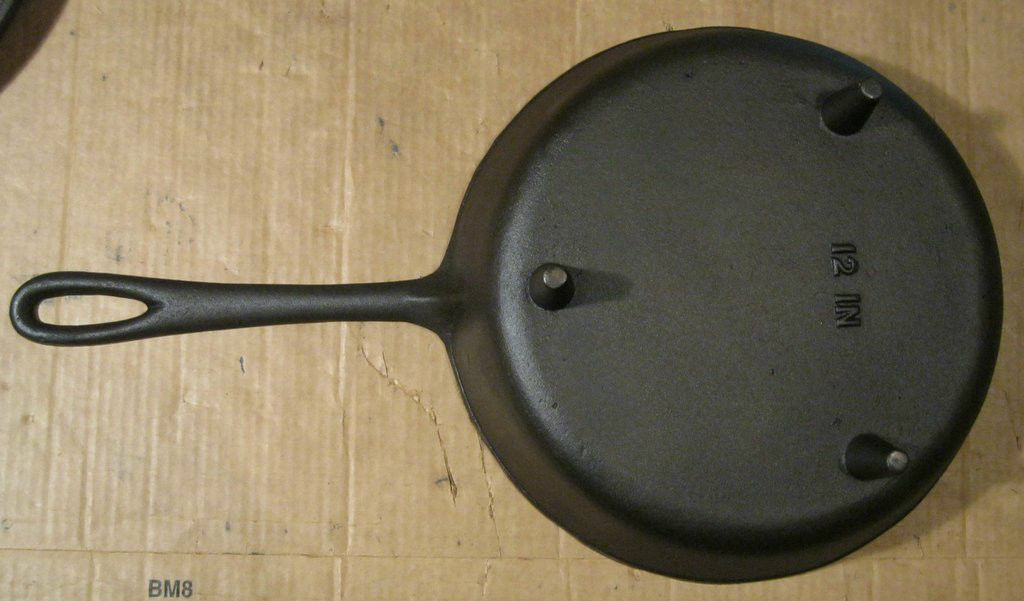 Photos courtesy of Jason Walker. This is a BS&R spider with the original labels still attached. This verifies these pans were definitely produced by Birmingham Stove & Range or Atlanta Stove Works.

This later model spider does not have the large 12 IN mark on the bottom, but rather a smaller number 12. The font style of the number matches the font used on BS&R's Century Cookware pans after 1966. This indicates this is a later model spider, made after the year 1966 – definitely not a 19th century spider! The lid specifications are listed below.

The first generation of BS&R camp ovens, produced through the 1930s and 1940s, had legs for standing up outdoors. They had vertical "ears" on the left and right side for lifting the pot, shaped in the same manner of the sugar kettles and cauldrons produced during the early 20th century. 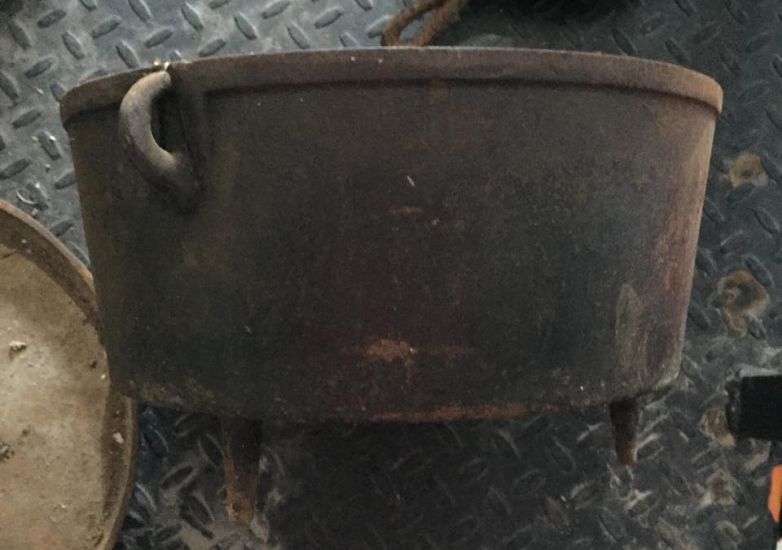 Here is a Century series 14 IN camp oven by Birmingham Stove & Range. The tab lid, plus MADE IN USA mark, both indicate it was made after 1966. The wire loop in the tab handle was likely added by the owner, to make the lid easier to lift. The "ears" on the sides have been redesigned in the style of the BS&R dutch oven; they are now in line with the upper rim, and not located vertically on the sides.

Note that the pot is completely round. Unlike the BS&R flat bottom dutch oven, it does not have a pour spout. Photo courtesy of Jason Walker. This is a BS&R camp oven with the original label still attached. As before, this verifies these pans were definitely produced by Birmingham Stove & Range or Atlanta Stove Works.

Lids for Birmingham Stove & Range camp ovens differed greatly from their more familiar and common skillet and dutch oven lids. They were designed completely different, and their sizes were also different. The camp oven lids fit on BS&R's camp ovens and spiders, but not on their kitchen cookware. Because of this, these camp oven lids have been largely unknown throughout the years. Even though they were all manufactured in the 20th century, many antique vendors and collectors mistakenly state they were manufactured in the 1800s, for older 19th century spiders and camp ovens.

There was only one model or style of the BS&R camp oven lid. This was manufactured by BS&R throughout its entire history, from the earlier Red Mountain series all the way through later Century Cookware. The number of camp oven pieces produced by BS&R was far less than their skillet and dutch oven lids, and so BS&R camp oven lids in general are rare and hard to find.

The lid is flanged with a raised ridge on the outer rim. As with all camp oven lids, this allows coals to be placed onto the lid without falling off. Unlike BS&R kitchen lids, there are no dimples at all on the underside. The bottom is completely smooth.

These camp oven lids were produced in six sizes, all with an exact measurement: 9 IN, 10 IN, 11 IN, 12 IN, 13 IN, and 14 IN. On all of these lids, the heat ring on the underside has a diameter exactly one inch less than the top. This is seen in this photo, where a 12 IN lid has an underside heat ring 11 inches in diameter. In 1967, the introduction of DISA automated production brought one major change to the design of the camp oven lid. As with their saucepans, all Birmingham Stove & Range camp lids made during and after the year 1967 have tab handles rather than typical handles. These tab handles make the pot harder to lift, and persons using these lids would often use a hook or even pliers to lift the lid. The tab handle was a cost-cutting measure used with lines of product produced in lower numbers. A lid with a handle required an additional step in the manufacturing process to produce the handle, while the tab lid could be molded at the same time as the lid itself. Far more dutch oven lids were produced at BS&R than camp oven lids; therefore, the additional effort and expense was made so that all of the dutch oven lids were made with handles. Fewer camp oven lids were made and sold, so these lids were made with tab handles to reduce production costs.

Dwayne Henson wrote on Facebook, "Before the Mair lifter, most people used camping pliers, fencing pliers, channel locks, etc. to lift the lid. The problem with these was that often, people would often grip the coal retaining ring with the pliers and a bust out a section of that ring. That is why so many older CO Lids have 'bites' missing out of the coal retaining ring. Don't do this! Lifting that thick tab with pliers ought to work, but don't do that! Get a proper lifter. I have also seen where people run a loop of wire through the hole and use that. But the tab was a very easy pattern for the mold to release with the DISA machines. CO [camp oven] lids were a smaller volume item and the lifting tab was a quick, easy, cheap way to get the job done. The higher volume items DO/Skillet lids had that opening finger handle redesigned to work with the DISA's." – April 29, 2015