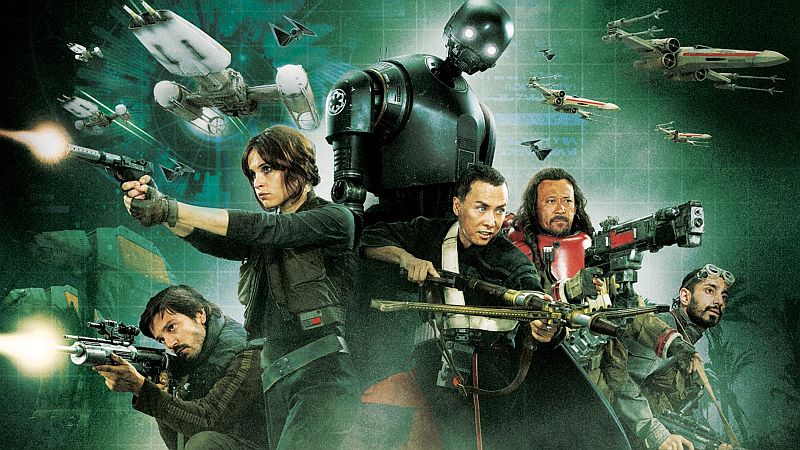 Rogue One is almost certainly one of the biggest and most extreme "fan service" movies ever made. Even more than The Force Awakens, it was made by Star Wars fans for Star Wars fans. That's the ultimate irony of this movie, seeing how it is less like a Star Wars movie than any of the seven movies released before. Star Wars is, of course, a fantasy adventure series and all of the movies until now have intentionally been made in a comic book style. As we know, this was because George Lucas envisioned the story as a loving tribute to movie serials, especially Buster Crabbe's Buck Rogers. Rogue One, on the other hand, gives as a more serious "war movie" that happens to take place in the Star Wars universe. It certainly is a Star Wars movie, but it's done in a style that is utterly different: if George Lucas was borrowing from Akira Kurosawa, director Gareth Edwards is borrowing from Howard Hawks and even modern war movies like Black Hawk Down and Saving Private Ryan.

Its stark difference from the previous Star Wars movies makes the first act difficult to understand, at first, simply because the style of acting and cinematography is so different. Do any of the other movies have major scenes set under a cloudy sky or in the pouring rain? The opening sequence here takes place on a cold, windy and empty landscape beneath a cloudy sky, suggesting any number of British and Irish films rather than the science fiction settings of the previous movies. The "prequel" movies were so full of CGI scenery that the actors were filmed largely in front of blue screens. That's certainly not the case here. It's a much more seamless blend of "science fiction" fantasy and reality than ever before in the Star Wars saga, and it takes us off guard.

The original Star Wars (a.k.a. "A New Hope") won accolades for depicting its futuristic society as dirty and full of worn-out equipment, rather than the polished and brand-new settings of nearly all science fiction movies before then. And while the "dirty, grungy future" look has been taken to extremes in the decades since Star Wars, the street scene on the desert planet of Jedha is far more "realistic" than the famous Mos Eisley bar. It's also less overtly "funny" than Mos Eisley, but it's crammed with in-jokes and references to the original Star Wars," with a great many subtle references that would be noticed immediately by hardcore Star Wars fanboys – including myself. There are split-second appearances of the alien-speaking robot that R2-D2 first encountered in the Jawa sandcrawler; a fleeting glimpse of the robot droid blown up by Han Solo on the ice world of Hoth; and the much more obvious joke of an appearance by the two bullies from the Mos Eisley cantina, who said, "He doesn't like you – I don't like you either!" These cameo appearances continue throughout the entire movie, up to and including the grand battle scene at the climax. Not only do we see the Imperial Walkers, but also the squads of storm troopers are accompanied by the roller skate mouse robot from the first movie; while the Rebels communicate with each other via comlinks that are exactly what C-3PO used to talk to Luke when they were in the trash compactor. It's these subtle references that reveal how much attention was paid to excruciating detail in this movie, all the way to the final scene at the closing credits, which could immediately begin "A New Hope" right there.

This "more serious" approach to telling a Star Wars movie means we don't have to suffer through the politics of the Imperial Senate that bogged down the prequel trilogy. The politics of Rogue One, rather, takes its cues from modern day events, right out of today's news rather than out of comic books. What I found interesting was the way it put a great emphasis on the Rebellion, with so many of the Rebels' tactics, politics, and fanatic beliefs strikingly similar to modern day terrorist and "revolutionary" groups – eerily so. I actually feel this movie will be a big hit in areas with active terrorist civil wars, such as the Middle East, especially for this reason. But I'm not going to read a political "meaning" into this, or suggest the Rebel Alliance is some sort of metaphor for the conflicts taking place in the Middle East or Africa. The story is certainly influenced by modern day terrorism, and there is an unmistakable similarity between the Rebels and real-life groups of that sort – and that has to be intentional. What makes the Rebel Alliance more "good" than ISIS or Al-Qaeda, though, is the cause they are fighting for is unquestionably "good." This is still Star Wars, and the good guys are still battling the forces of evil. While there's more of a grey area here than in any of the other movies, it's still Star Wars. The new characters introduced in Rogue One aren't absolute good or absolute evil, which greatly differs from the rest of the series; Saw Gerrera (Forest Whitaker) is described by the Rebel Alliance as "a fanatic" who even they don't trust; but we don't see any reason why he is so untrustworthy. Orson Crennic, the "Director of Advanced Weapons" who is in charge of the Imperial archives where the Death Star plans are stored, still has some sympathy for Jyn and her father; but he finds himself a helpless victim of the political power game being played by Grand Moff Tarkin, who has his own plans for the Death Star.

But none of these details would matter if we didn't care for the characters themselves, and I have to admit there's a problem here. The movie goes out of its way to make its heroes believable and sympathetic; especially Jyn Erso, who finds herself drawn into this epic struggle in spite of herself. She's not a Jedi and she has nothing to do with the Force. But what drives her is something as mystic and universal as the Force, namely her love for her father and his love for her. However, she's somewhat lacking in charisma, and she doesn't have the charm of Rae, the heroine of The Force Awakens. Rogue One does give us memorable moments involving a mystical "priest" or monk who uses The Force, and we also have a droid who isn't annoyingly cute (BB-8) or just annoying (C-3PO). But it seems as though most of the most memorable one-liners come from the droid, rather than any of the major characters. Maybe it's because the characters of Rogue One aren't absolute good or absolute evil, as we see in all of the other Star Wars movies.

In fact, if there's any character who would be unquestionably evil, it's Governor Tarkin, who is incredibly recreated in the image of Peter Cushing from the original Star Wars." And then there's Darth Vader's unforgettable battle scene, which lasts for all of thirty seconds but will have fanboys discussing every microsecond for decades to come. Vader is a truly evil monster in this movie, more like a monster than a human being; and for many of us (including myself) that's how he should be – at this point in the saga, he's certainly become a monster.

This brings us to the grand climax of the movie, the final great battle at the planet Scarif, as the Rebels risk their lives to discover the secret weakness of the Death Star. The final act of the film has everything we'd expect from a Star Wars movie - epic space battles, great cliffhanger moments, and yes, even a lightsaber (which I don't want to spoil here). And then there's that ending, one that seems…correct and right. The fanboys are arguing about the ending, and of course they always will – but the arguing is simply over the little details. Was it necessary to have the final scene be an exact fit for the puzzle piece leading into Star Wars?" I'll admit, it certainly was cool! Without that final scene, the movie would have ended with a flash and seemed incredibly depressing. That particular "explosion" would also have been a fitting end for the movie…but this is a Star Wars movie, from Disney. There's simply no way Disney would have allowed the movie to end on such a depressing note. So, the final scene was added as a capstone to keep people from leaving the movie bawling and crying…especially the kids. In fact, it's likely this final scene was the entire reason for the movie's fan-service. All of those references to the original Star Wars lead up to this final moment, which even ends with the final credits playing the original John Williams score from Star Wars. This ending isn't simply tacked on, and it's not a cop-out written to salvage the characters, as when no one essential died in the final battle of Return of the Jedi – and it wasn't anywhere near the series' greatest mistakes, which can be summed up in two separate sets of three words each: "Greedo shoots first" and "Jar Jar Binks."

Yes, I enjoyed it, and I'd call it a success. There really wasn't any reason to make this movie, other than to cash in on Star Wars and fill the movie with fan service to answer the question, "Why did the Death Star have that fatal weakness?" But even so, it still tells a good story – and that in itself is a good reason to watch this.

Has the Democratic Party appropriated the signature tagline "Rebellions are built upon hope" yet?