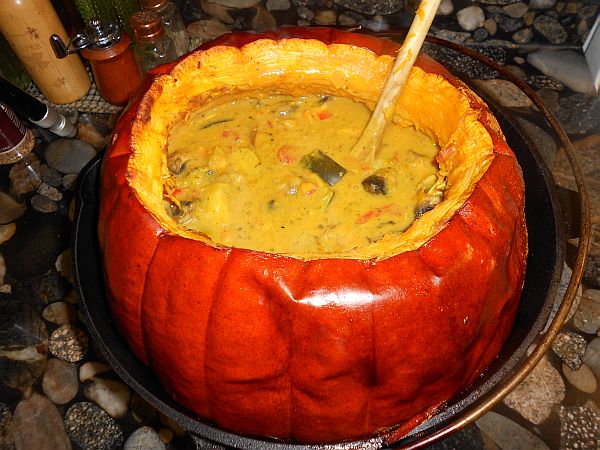 In October of 2014, the urge struck me to take a big pumpkin, stuff it, and roast the entire pumpkin in the oven. I love the taste of roasted pumpkin, yet not many people have ever tried one. They eat squash all the time, but not pumpkin…even though pumpkin is a squash itself.

I've learned that while this makes for great presentation, food doesn't cook very well when you stuff it into a pumpkin. The pumpkin absorbs most of the heat from the oven and doesn't pass it on to the food, so what you end up with is a well-cooked pumpkin, but the food inside is barely done at all. So, to compensate for this, we actually have to make this dish in two parts. First, we'll prepare the stew and partially cook it; and then we can add it to the pumpkin, and roast the entire dish in the oven.

A stew of curry chicken works well here, as the flavor of the curry sauce blends wonderfully with the squash; we also add other tubers to the dish, to make a thick stew that sits in your belly and keeps you warm as the weather moves toward the cold of winter.

Preparation time: 1 hour, including 30 minutes to steam the vegetables as the chicken is being prepared

Plus – a big, jack-o-lantern sized pumpkin, about 12 inches in diameter. The pumpkin needs to be able to fit into your pot…and into your oven!

Chop up the potatoes and sweet potato into medium-sized pieces. Chop up the acorn squash into similar sized pieces, and remove the seeds and innards from the squash. Add these vegetable pieces into your stock pot, and either boil or steam them for 30 minutes to soften them. They will be ready when you can easily poke a fork into them. While the tubers are boiling, prepare your curry chicken as listed below.

Slice and dice the chicken breasts into large square pieces, about one-half to one inch wide.

Before cooking, prepare four separate bowls for your ingredients: one metal or glass bowl for the chicken (it must be a heat resistant bowl, so the chicken can be returned to the bowl after browning); one bowl of minced onion, chopped bell pepper, garlic, and ginger; one bowl of powdered spices; and one bowl for the sauce. For the fourth bowl, drain the tomatoes before adding them. Mix together the tomatoes and yogurt, and stir in one tablespoon of cilantro.

Reduce the heat under the skillet to medium-high; add more cooking oil to the skillet, and heat it for a minute. Add onion, bell pepper, garlic, and ginger (bowl 2) to the skillet. Stir until the onion caramelizes and turns translucent. Add additional oil to the skillet and heat for a minute, still stirring the onions and peppers. Stir the curry powder, cumin, turmeric, coriander, and cayenne pepper (bowl 3) into the onion mixture; allow to heat together for about 1 minute while stirring. Empty the onions and spices from the skillet into the bowl of tomato and yogurt sauce (bowl 4), and stir it all together. Add 1 tablespoon chopped cilantro into the mixture. Empty the chicken pieces into the bowl of tomato and yogurt sauce, and mix it all together.

Mix 1/2 cup of flour into the bowl of chicken and sauce, and stir it around to thicken it. Mix in another 1/2 cup of flour, and thicken it even more. The stew will be very thick and hard to stir by the time you're finished mixing it. Don't worry, this is correct!

When the vegetables are finished boiling, place the softened tubers into a large bowl, to add to the stew later.

Finally, cut mushrooms into quarters, and set them aside to add to the stew.

Preheat your oven to 350 degrees Fahrenheit.

Cut a large opening in the top of the pumpkin, and remove the top. Cut the seeds and stringy pumpkin guts off the top. Set the top aside, to use when roasting the pumpkin.

Clean out the inside of the pumpkin, reserving the seeds and pumpkin innards into a bowl. You can, of course, use this for Roasted Pumpkin Seeds if you wish.

If you don't want to do this, then you can discard the seeds and pumpkin innards.

Roast the entire pumpkin in the pot, at 350 degrees Fahrenneit, for 90 minutes (one and a half hours). After this, uncover the pumpkin, raise the oven temperature to 375 degrees Fahrenheit, and cook it uncovered for one hour. This will ensure the stew is cooked, along with the pumpkin. After removing the pumpkin stop, you can either keep it for covering the pumpkin afterwards; or discard it and use something else to cover the pot.

After a total of two and a half hours cooking, take the pot out of the oven. Stir the stew to mix it all together. Serve in bowls, with bread or any stew accompaniments you prefer.

And don't forget to eat the pumpkin! The pumpkin has a roasted taste you will certainly enjoy.