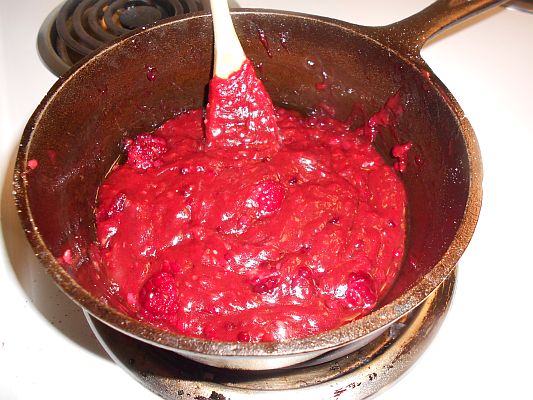 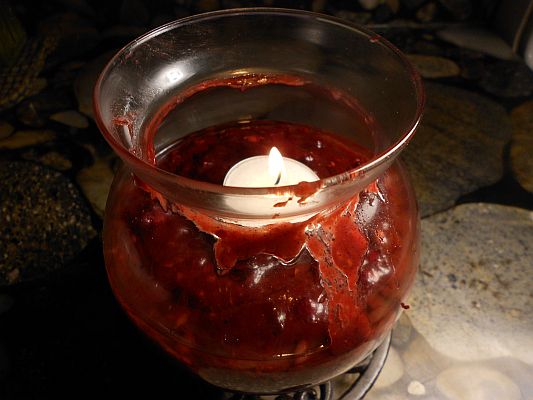 December 20, 2014: Everyone has their own favorite version of the classic story A Christmas Carol. As I grew up, there was only one Ebenezer Scrooge for me, and I had indeed seen this Scrooge for the first time when I was very young. This was none other than the Scrooge we see in Mister Magoo's Christmas Carol, as he was played by Jim Backus. And this leads to one of the most memorable moments of Mister Magoo's Christmas Carol: Bob Cratchit's family sits down to dinner and sings "The Lord's Bright Blessing," while Tiny Tim (cameo appearance by Gerald McBoing Boing!) sings of the joys of razzleberry dressing. And so, fifty-two years after the TV special first aired, I've made my attempt at re-creating this famous fictional sauce.

As it turned out, this dish was quite easy to prepare. I attempted to re-create ingredients that a poor working-class family of the Victorian area might have access to – including a few special treasures carefully saved for Christmas, namely berries and spice. "Razzleberry" is a combination of raspberries and blackberries. A poor family of this sort would be more likely to use animal fat for cooking, rather than fresh butter; and so, I added lard to the roux for authenticity. You can substitute butter for the lard, but this will affect the taste of the sauce. The final result here is a savory, mild sauce that doesn't have a sharp flavor of its own. Rather, it enhances the flavor of poultry such as gander or hen (or chicken or turkey), giving a bit of savory sweetness to the meat. It would be a good alternative to gravy, or a combination to provide variety to a single meat dish. A person dining could have gravy in one serving, and razzleberry dressing in the second serving – truly, a feast worthy of the finest working class family!

Dishes needed: One medium sized saucepan – this recipe doesn't produce a huge amount of sauce. You can't drown your bird in this, but you can use it to dress the bird as you serve your guests.

Begin by preparing a roux. Over medium-low heat, melt 1/4 cup of fat (such as lard) in your saucepan. Add salt, ground pepper, and flour. Stir it all together into a pasty mixture.

Add blackberries and raspberries to the pan. Stir in brown sugar, allspice, cinnamon. Stir over low-to-medium heat for ten minutes, until the berries have come apart and you have a thick sauce. Add a splash of brandy (about one tablespoon), and about 1/4 cup chicken stock (broth). Stir it all together for another five to ten minutes. The extra liquid will thin the sauce, then the additional stirring will reduce the liquid and thicken it again.

Your razzleberry dressing will be ready to remove from the heat when it makes a thick, slurping sound every time you stir it. Remove from heat and set aside for about ten minutes.

After serving poultry (goose, duck, turkey, or chicken), serve razzleberry dressing onto your guest's serving of meat, so they can eat it together in one bite.

A YouTube video on the making of this dish: Razzleberry Dressing 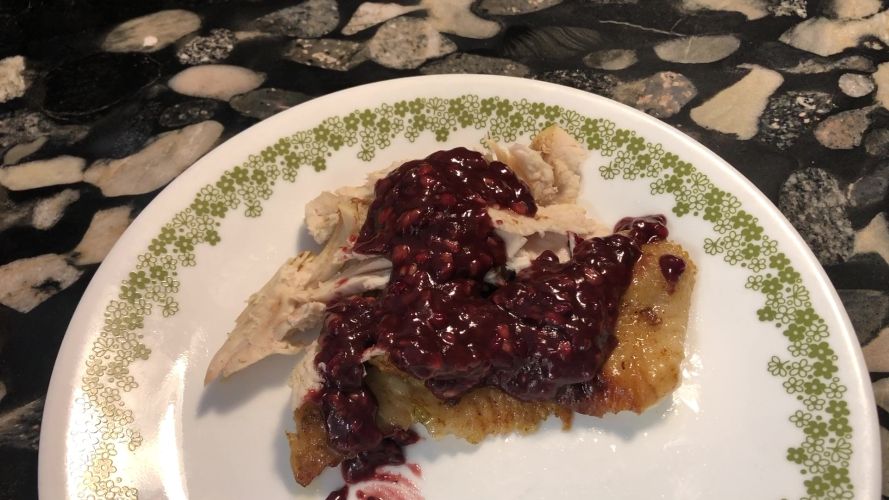