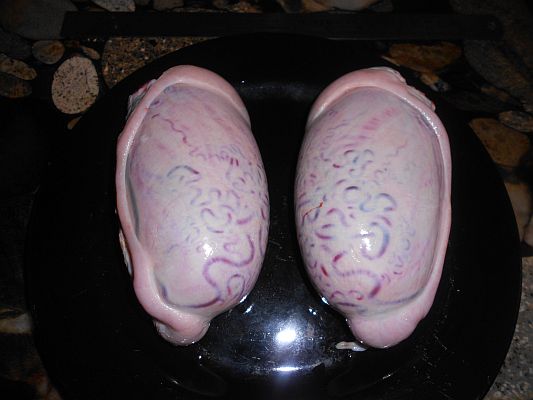 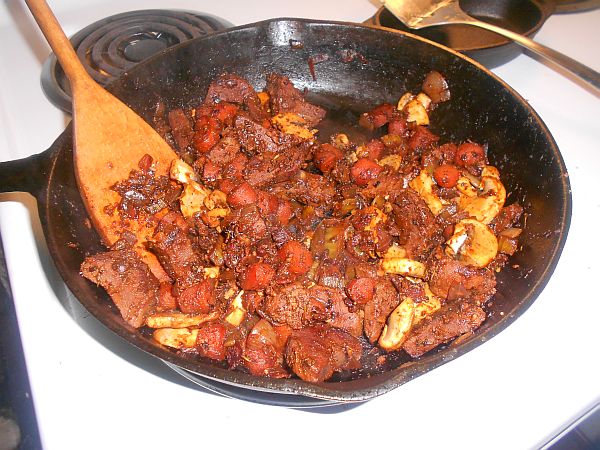 Rocky Mountain oysters, that delicacy the cattle ranchers never tell you about, and they are probably one of the strangest foods many people are every likely to eat. What are Rocky Mountain yoysters? They're bull testicles. Yes, they are balls cut off of a bull, when the bull is neutered before being put out to pasture as steer. I came across actual Rocky Mountain oysters on a visit to a [ Dietrich's Meat Market], awonderful meat market in Pennsylvania; and I just couldn't get the idea of actually cooking these out of my mind. It took a while to order these, because it turns out it's tough to get your hands on a pair of balls like these. And when I did some research on the best way to cook these, I seems as though the only way to make these is deep fried. But I saw a bunch of comments that suggest, when people eat these, they're actually UNDERCOOKED.

I'm not a big fan of deep frying, so this recipe is prepared a little different. This is certainly a tough piece of meat, so I decided to try my hand at braising these in wine, in a manner similar to the preparations for boeuf bourginoin or coq au vin. The result? It was delicious! You need to know that when properly prepared, Rocky Mountain oysters do not "taste like chicken." Rather, they have a taste not unlike the taste of liver – except that it's not as strong as liver. If you're served this dish and it tastes like chicken, it's being prepared wrong.

We start by freezing our balls for an hour to toughen them up and make them more firm. That way they'll be easier to peel. Then, it's just a matter of taking a sharp knife, and slicing away the outer skin to reveal the soft, juicy parts underneath. The proper way to remove the outer skin is seen in the YouTube video Red Wine Balls.

When your balls are exposed and naked, brine them to remove the blood. This is done by taking a bowl of cold water, mixing in two tablespoons of salt and red wine vinegar, and soaking them for an hour. While they're soaking, prepare the mirepoix for cooking: slice and dice carrots, celery, onion. Slice mushrooms.

The next step is to blanch our balls. We heat up a pot of water without reaching the boiling point, and submerge our balls in the hot water for about ten minutes. This will toughen them so they can be handled and sliced. Don't blanch your balls too long or they'll become rubbery, and no one likes chewy balls in their mouth.

And now, at last, we get down to the cooking! Bacon makes everything better, so first we heat up sliced bacon, in order to render out the fat. We remove the bacon before it's crisp, so we can add it later. And then, we add our sliced balls to the bacon fat, and sear the outsides. I noticed two things about this meat: first, the outside did not take on a darker color, even as it cooked. Also, these balls released so much liquid, I had to drain the pan. Once the liquid was let go, I borrowed a tip from Julia Child, added some brandy to the pan, and lit it flambe. Flambéeing your meat helps to make it more firm and less chewy; though, even here, the color didn't seem to change. So, we simply proceed and add our mirepoix vegetables, some salt and fresh ground pepper, and stirred in the onions. To this, we add two bay leaves, and about half a teaspoon of thyme. After this, we cover the pan for about five minutes, to let it braise.

When the pan was uncovered, I noticed the balls had stopped releasing more liquid, and the underside was finally beginning to caramelize. Now it was time to add the wine. We add enough wine to cover the food, then add in the bacon, some minced garlic, and a tablespoon of tomato paste. Mix it all together, then we cover the pan, turn the heat to medium low, and let it simmer for thirty minutes.

Half an hour later, I was surprised to see the wine had completely evaporated. I was expecting to see a thick sauce, but the dish was dry. However, it was wonderfully cooked. The underside had a thick coating, but it was not burned, and the balls had finally taken on a darker color. What's more, they were so well cooked, they came apart easily. I had expected to add the mushrooms cook this for another fifteen minutes, but it certainly seemed as though this dish was done. So, I added a little more wine to put some liquid in the pan, added the mushrooms now, and stirred it for about five minutes for them to cook. Then, it was ready to serve.

A YouTube video on preparing this dish: Red Wine Balls