April 23rd, 2011, 8:00 AM: I recently acquired three cast iron skillets in need of restoration. Two of them were purchased at antique stores in New York, and these are nearly one hundred years old. The third is a 12-inch skillet given as a gift (wow!); while it's a sturdy pan, there are some rust marks on there that need to be removed. While the vinegar method proved effective in restoring an iron grill recently (see Restoring a Cast Iron Grill with Vinegar), I've been intrigued by a mysterious method used for restoring old iron – a method using that strange stuff known as "electricity." So, I decided to set up a process to restore these old pans with electrolysis: using an electrical current to remove the corrosion from the pan. 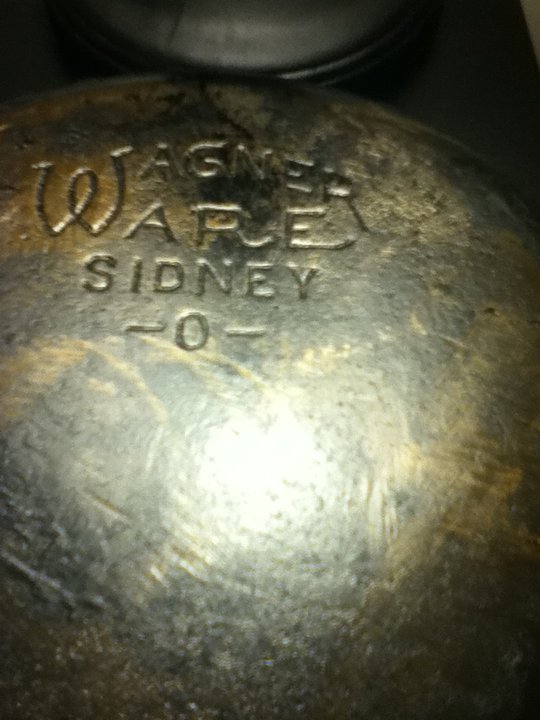 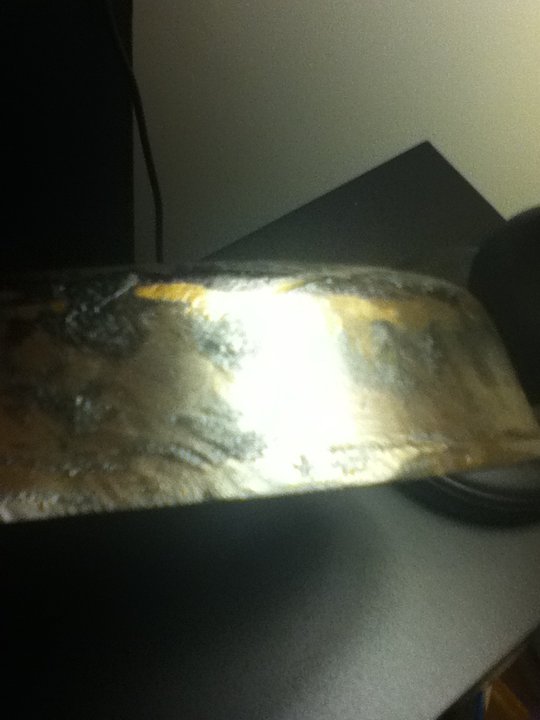 The best document on electrolysis is here: www.wag-society.org/Electrolysis/rust_redct_elect_setup.htm Using this method, I went out and found the parts needed: 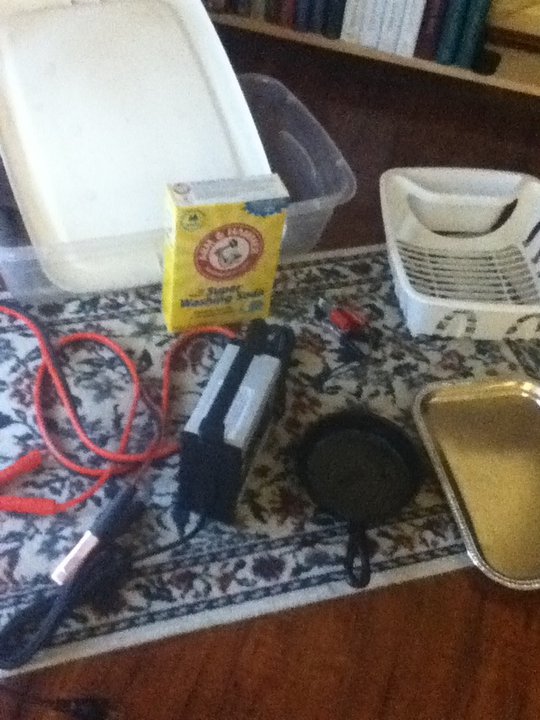 None of this was very expensive. The most expensive item here is the battery charger; but if you wanted to do this on the cheap, I don't see why you couldn't get a 12-volt power transformer plug at Salvation Army or a dollar store, and use jumper cables to attach it to your pan. (If you do this, be sure to use a surge protector.) The washing soda (not baking soda) costs $3 at Stop & Shop and can be found in the laundry detergent aisle. The extra jumper cables ($5 at Family Dollar) are there so I don't have to connect the battery charger directly to the metal; the contact points are going to collect gunk and maybe corrode, so I'll eventually have to replace the jumper cables. The metal plate is the "sacrificial anode:" it's meant to attract corrosion, and eventually it will corrode and be eaten up by the electrolysis process. That cost me all of one dollar at Dollar Tree. The plastic dish rack is also from Dollar Tree; I'm placing the pan in there to keep it from touching the metal plate. The positive (metal plate) and negative (iron pan) contact points must never touch, or else the current will flow through them and eventually ruin the pan. 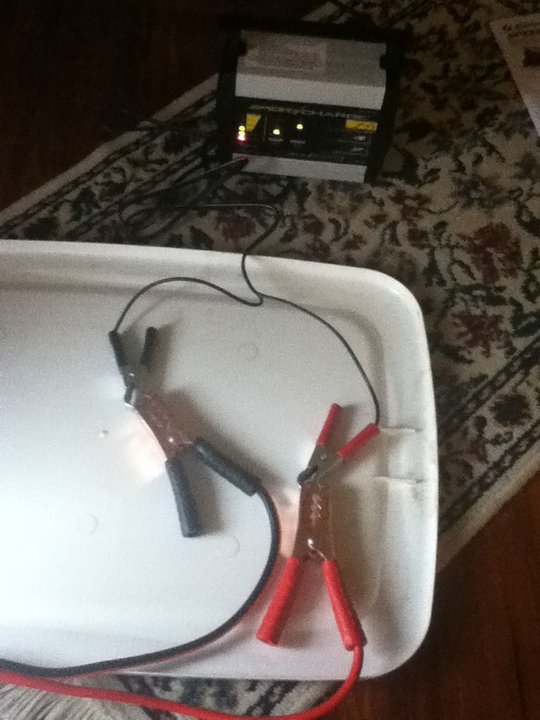 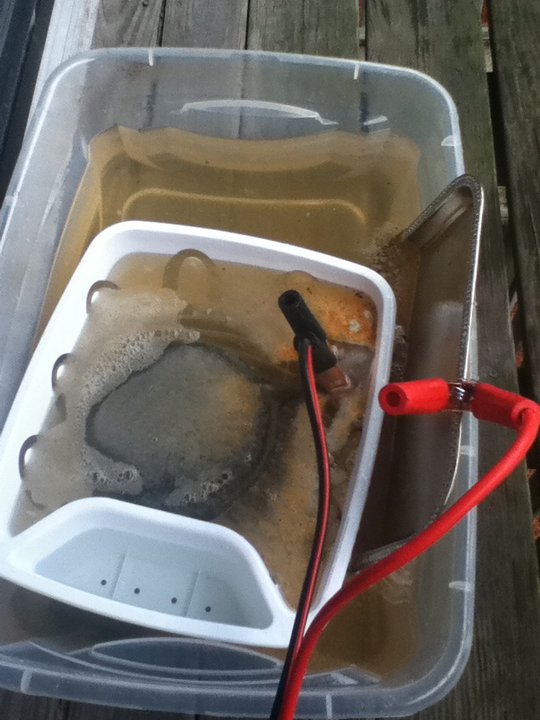 3:30 PM: About five hours into the electrolysis treatment, I figured that was enough; the pan wasn't in too bad a condition in the beginning. So I spent a few minutes briskly going at it with steel wool…and THIS is the result! 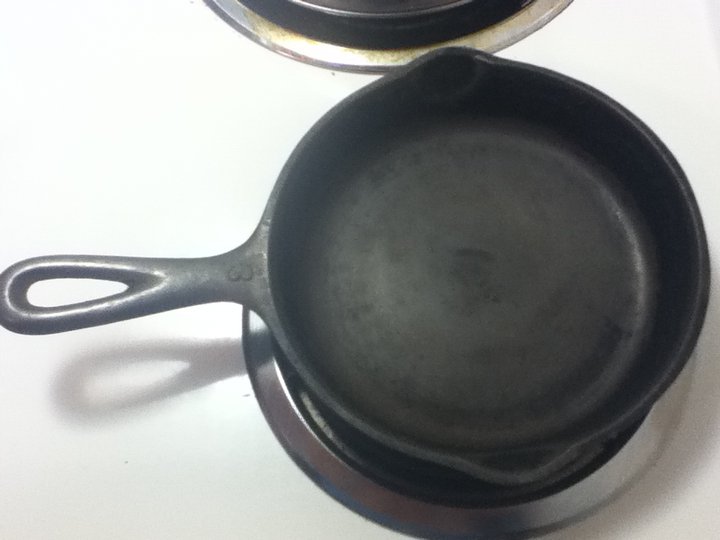 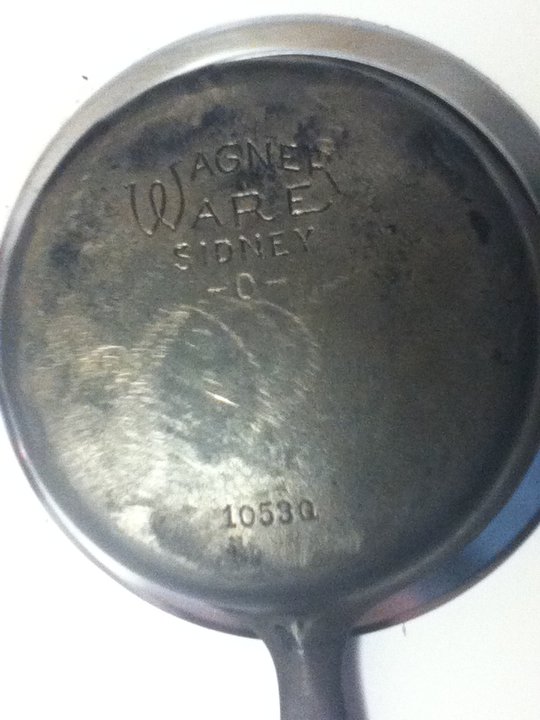