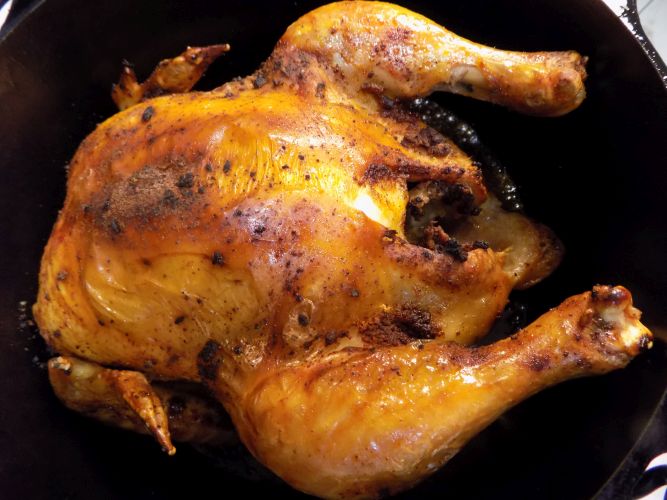 YouTube: The Best Cast Iron Roast Chicken You've Ever Made

One of the easiest and best ways to roast a chicken is to use a screaming hot cast iron pan as a roasting pan. A very popular recipe for Skillet Roasted Chicken provides very simple instructions: Place a cast iron skillet into the oven; heat the oven and the pan to 500 degrees Fahrenheit; plop the chicken onto the hot cast iron; and roast it uncovered for 45 minutes. The result is an outstanding, thoroughly cooked chicken that anyone would be proud of. However…

There's one major drawback to this method of cooking a chicken. The chicken splatters grease all over the oven as it cooks, and the oven needs to be cleaned afterwards. Because of this, I wondered whether it would be possible to use this same method with a cast iron dutch oven. A dutch oven at 500 degrees would completely surround the chicken and contain the grease, while still cooking it at lightning speed. And so, I set out to give this a try. The result? This produced an awesome roast chicken! Everything about this chicken was perfect: The skin was wonderfully crisp and easily pulled off the chicken; the meat was thoroughly cooked to the bone, without a hint of pink; and the breast meat was tender, moist and juicy. The white meat cut easily and did not flake apart, as you would see with a dried out chicken.

This is an outstanding chicken dish that's easy prepare, and fast. The one matter of concern is that it requires you to heat a big, heavy cast iron pot so that it's extremely hot. Be sure to take precautions when making this dish, so no one is burned by the hot cast iron pan – especially yourself!

Make sure your chicken is defrosted before cooking, though you don't have to bring it to room temperature.

Place a 10-inch #8 sized cast iron dutch oven into the oven, including the lid, and heat the oven and iron pan to 500 degrees Fahrenheit. You don't have to oil or grease the pan in advance, heat it dry. Depending on your oven, it may take up to 45 minutes to pre-heat your pan.

While the oven is heating, prepare your chicken. Drain the liquid and remove the bag of giblets, and anything else that may have been added to it. Some chicken packagers include a plastic pop-out thermometer, while others may even have a brace or other items inside the chicken. Remove them all. Dry the outside of the chicken with paper towels; it doesn't have to be bone-dry, but dry enough to handle without soaking your hands.

Prepare a rub of salt, pepper, garlic powder, and any other herbs or seasonings you want to add. (Common seasonings include parsley, rosemary, thyme, and paprika.) Apply the rub all over the outside of the chicken, and add some to the inside cavity as well. Don't stuff the chicken, as stuffing will require a longer cooking time. Don't truss or tie down the chicken: leaving the legs free will allow more surface of the bird to contact with the hot metal of the cast iron pan. This will apply extra cooking to the dark meat of the legs, thighs, and underside.

When the oven is at 500 degrees, use heavy gloves or oven mitts to take the cast iron pot out, and place it on a trivet or your stovetop burner. (Be careful – the iron is very hot!) When you remove the lid, there will almost certainly be a puff of smoke from the pot. This is correct: you've just heated a seasoned cast iron pan to 500 degrees! Take the chicken and place it in the pot, breast side up, so that the legs and underside are laying directly on the hot metal surface. The chicken will immediately begin to sizzle and sear. Using heavy gloves, place the hot iron cover onto the pot. Place the pot and chicken in the oven at 500 degrees, and roast it for 40 minutes. That's it – you don't have to baste or turn over the chicken, just wait for it to finish cooking.

After the chicken has cooked for 40 minutes, carefully remove the lid from the dutch oven – remember, it's extremely hot! Be careful! – and place it on top of the stove to cool off. We won't be using the lid again. Let the chicken roast uncovered for five minutes to crisp the skin.