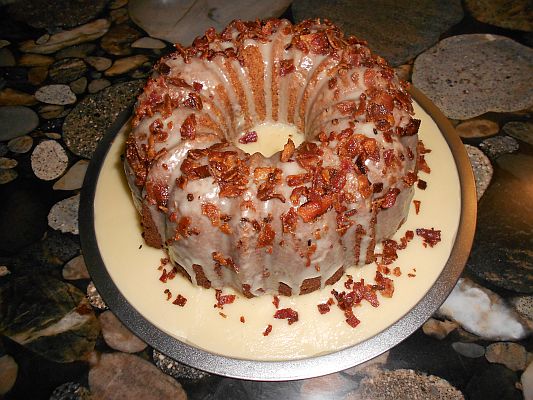 Because bacon makes everything better. Apple spice bundt cake with a buttercream glaze. Maple syrup was added to the glaze to give it flavor, and crumbled bacon added to the top. After all, we like maple syrup on our breakfast sausage and bacon, so why not have it here? The crunchiness of the bacon adds to the sweetness of the glaze, giving the apple spice cake an extra kick.

Pans needed: Either one large cake pan, such as a 12-inch pan or bundt cake pan; or two 8-to-9-inch cake pans. Large bowl to mix together cake ingredients.

Preheat oven to 350 degrees F. While the oven is heating, peel and grate your apples into a bowl with a cheese grater (use the side of the cheese grater with the large holes). If you use a measuring cup for the apples, pack them down in the cup as you measure.

Mix cake ingredients in order. (Don't add the bacon to the mix, put it aside to cook separately.) Pour into either one large cake pan, or two greased and floured 8-inch cake pans. (Two cakes or one double-layer cake!) Bake 60 minutes, then test to see if it's done (however you test for doneness - toothpick, touch, whatever). If a toothpick shows it's still not firm on the inside, keep the cake in the oven and test every 10 minutes until done. (When Alton Brown made his apple bundt cake, he used his trusty probe thermometer and declared the cake was done when it measured 205 degrees. He wrote, "The cake is done when it pulls away from the sides of the pan, springs back when pressed and the internal temperature reaches 205 degrees F.")

(Comment from Kita SolCat: "The batter was a little dry; apples are out of season. So I added a splash of white wine. Also, there's a lot of batter, so I've got a few bonus cup-cakes to go with the cake. Huzzah!")

Bake the bacon until crispy, crush it, and sprinkle and pat it onto the cake.