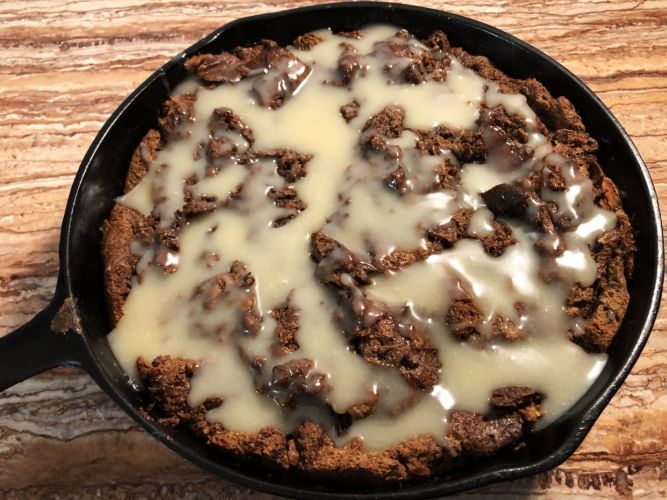 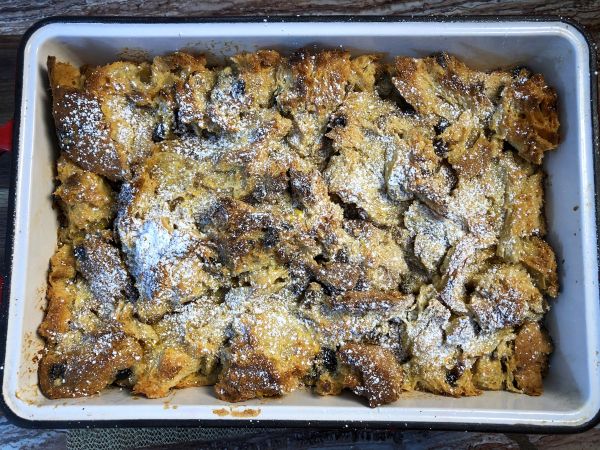 August 27, 2011: Today's cooking so far is bread pudding. That's exactly what it sounds like: a sweet pudding made with pieces of white bread as the filler, with sugar and eggs added, baked in the oven, and a sweet topping added to it. It's a medieval-era recipe, though this didn't come from the Pleyn Delit medieval cookbook; rather, it's in a different cookbook I found in Harvard Square about a month ago entitled, The Cook's Canon: 101 Classic Recipes Everyone Should Know by Raymond Sokolov. It has recipes for a lot of basic everyday meals in there, present in a manner that's simple to make but looks absolutely delicious. One of these is his take on the medieval recipe for bread pudding, and I was intrigued enough to give it a try. The preparation took a while, largely because this was my very first time boiling milk and I didn't want to burn it. But the result is wonderful!

An important fact to remember: this recipe works just as well with stale bread as it does with fresh bread. This recipe is brilliant (not my recipe, just the idea of bread pudding) because it's a great way to recycle old bread you've had sitting unused for several days. If your bread is stale and hard, but not moldy, you can break it into pieces and use it in a bread pudding. The result will not only be delicious, but it helps save money by helping keep your family fed instead of throwing out old bread. In this day and age where food budgets are tight, you'd think everyone would be doing this. 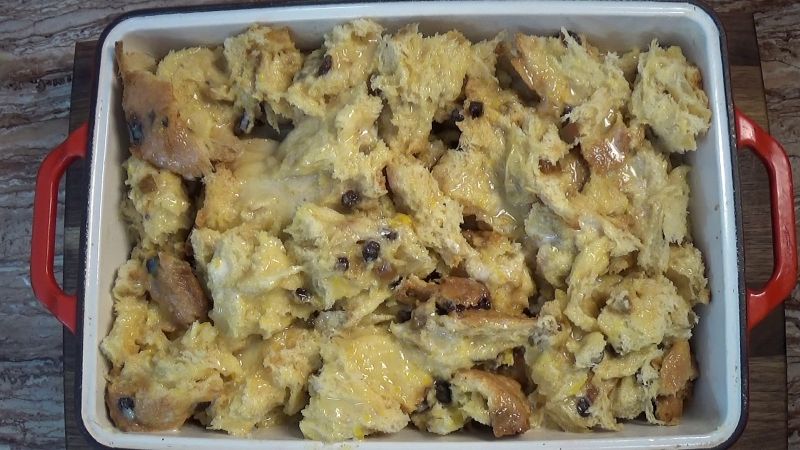 There are many variations on bread pudding, but the basics for it are:

Coat a (cast iron) pan with butter, spreading the butter around the surface and sides of the pan. Break up the bread into pieces, cover the pan with bread, and mix in more butter.

The rule to produce a bread pudding that isn't too dry or too moist is: equal weights to bread and liquid. For every 8 ounces of bread, use 1 cup (8 ounces) of cream or milk.

In a bowl, beat together eggs and sugar into a paste. Add cream and/or milk and mix it in, along with 1 teaspoon vanilla extract, and a dash of salt. As an option, I've also mixed cinnamon and raisins into the egg and sugar paste, so that they could be added to the dish and baked as part of the pudding. You could separate your optional ingredients into halves: 1 teaspoon of cinnamon and 3 to 4 ounces of raisins, for the egg-sugar mixture, and 1 teaspoon of cinnamon plus more raisins for the final topping of the pudding as listed below.

Bake it uncovered at 350 degrees Fahrenheit for 30 minutes.

As the bread is baking in the pan, prepare a topping of your favorite kind. I've made a simple topping for this pudding with raisins, brown sugar, confectioner's sugar, cinnamon, and an additional 1/2 cup of cream or milk mixed together. As the pudding is baking, mix your preferred ingredients together in a bowl.

When the pudding comes out of the oven, pour the topping over the pudding and spread it around. Finally, add the additional 1 cup of cream (or milk). It will start bubbling right away. Let it sit for about five minutes. Use a serving ladle to scoop it into bowls, because it's a pudding. The result: hot, sweet pudding bliss. It's like eating a bowl full of French toast.