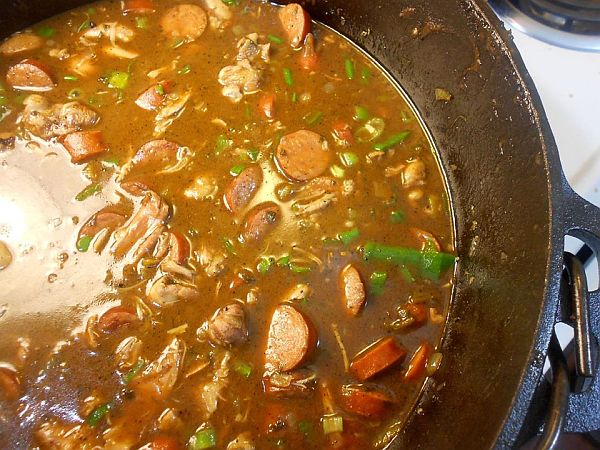 Prepare meat and vegetables. Cut the chicken into large parts, though it's not necessary to finely slice or dice the chicken here; as it will be shredded after cooking. You can use the bones if you prefer, as bones make for good broth. Season the chicken with the Old Bay, coating it liberally in seasoning. Put the chicken into the refrigerator to marinate. Slice sausage into 1-inch pieces. Chop up onions, celery, and bell peppers into small pieces.

If you're afraid of cooking with fat, you can use vegetable oil or your favorite "non-fat" cooking oil, but lard or bacon grease will certainly give the most flavor to your dish.

In a large cast iron dutch oven or large pot, heat the grease over medium-high heat. Add the sausage and cook until well browned, about 8 minutes. Remove the sausage with a slotted spoon and leave the fat in the pot. Reserve the sausage and set aside.

Add more grease or oil to the pot, about another tablespoon or two. Add chicken to the pot. Cook in the sausage grease over medium-high heat until well browned, 5 to 6 minutes. Remove the chicken from the pan, let cool, and then refrigerate until ready to use. At this point, you can use the pan drippings to make the roux.

The "golden rule" for making a roux is one part oil (or grease) to one part flour. However, many cooks use more flour than oil as the roux cooks, to give it the thick consistency they want. This recipe uses a total of one-half cup of lard or bacon grease with one cup of flour, rather than a full cup of oil. The thickness of lard seems to work better, for me at least, in bringing the roux to the right consistency.

The pan must be pre-heated and hot. Most gumbo recipes say to prepare the roux first. I like preparing the roux after cooking the sausage and chicken. Not only will the pan be hot, but the pan fond from the chicken and sausage will add flavor to the roux.

Add the additional 1/4 cup of lard to the existing grease in in the same Dutch oven over medium heat, and stir it to melt it completely. Add half of the flour, and mix it all together into a paste. When the flour is completely incorporated and the lumps are broken up, add the rest of the flour and mix it in. Use a whisk, large wooden spatula, or other cooking spoon with a flat edge. This will allow you to scrape the bottom of your dutch oven as you stir the roux. Scraping the surface will keep the roux from sticking and burning. Cook, stirring slowly and constantly for 20 to 25 minutes, to make a dark brown roux, the color of chocolate. As the roux thickens and turns darker, you may want to turn down the stovetop heat and prevent it from burning. Cajun cooks all say the same thing: don't stop stirring the roux until it reaches the dark brown color – if you stop stirring, it will burn!

At the beginning the roux is dry and thick like library paste; but by the end it has broken down and taken on a consistency that is more liquid and syrup-like.

A YouTube video clip demonstrating this: Stirring the Roux for Gumbo

Add the onions, celery, and bell pepper to the roux. Stir until the onions are caramelized, 4 to 5 minutes. Add salt, cayenne pepper, bay leaves. (Now is the time to add any other spices you desire, such as hot sauce, additional cajun seasoning or Old Bay, Worcestershire sauce, or your preferred additional flavorings.) Stir and cook for 2 minutes. Add the chicken broth, stirring until well combined. Add the reserved sausage. Bring the mixture to a boil. Reduce heat to medium-low and cook, uncovered and stirring occasionally, for 1 hour. The liquid will thicken into a thick, rich sauce with a smoky or charred aftertaste.

Add the chicken to the pot and stir it in. Cover the pot, so the liquid won't reduce further. Simmer for 1 1/2 hours.

After about one hour and ten minutes, when there are twenty minutes remaining, prepare the rice in a separate pot. Add water to the pot (not the gumbo pot), bring it to a rolling boil, and stir in the rice. Cover the pot, lower the heat to low, and let it simmer and steam for 20 minutes. It should still be simmering when the chicken is ready; it will be finished after the final steps of preparing the gumbo (see below) are completed.

After 90 minutes, remove the pot from the heat. Using a slotted spoon, remove the chicken from the gumbo and place on a cutting board to cool slightly. Remove and discard the bay leaves.

While the rice is still simmering, pull the chicken meat from the bones and shred, discarding the bones. Return the meat to the gumbo and stir in the green onions, parsley, and filé powder.

Serve over the cooked rice. Hot sauce can be added if you want to kick it up a notch.