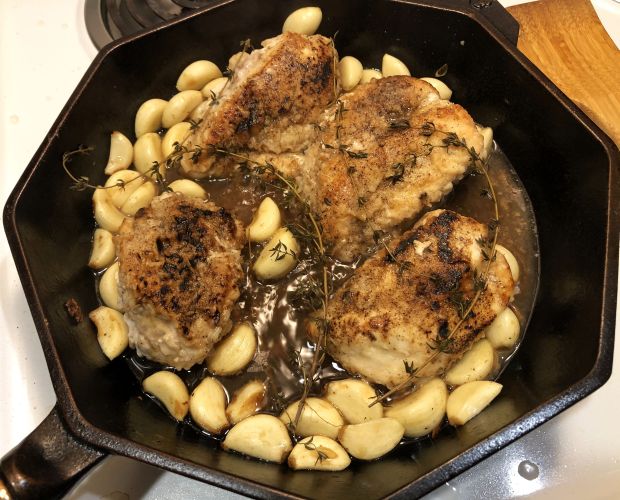 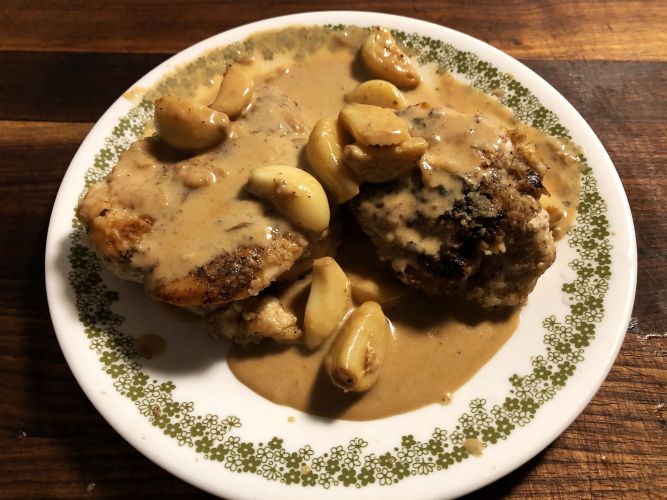 Another classic chicken dish from France…chicken with 42 cloves of garlic. It's supposed to be chicken with forty cloves, but 42 is a special number to anyone who knows The Hitchhiker's Guide To The Galaxy. Peeling all those garlic cloves is a chore, but it's definitely worth it when the garlic is cooked. And, trust me, the garlic is truly the centerpiece of this dish – perhaps even more than the chicken itself.

There are many variations of this recipe, but almost all of them use the following four steps:

1) In a hot pan, brown your chicken on both sides.
2) Take out the chicken and cook the garlic in the chicken juices.
3) Deglaze the pan to make a sauce.
4) Return the chicken to the pan, and cook it in the sauce until done.

Some recipes say to finish the final step by cooking the chicken in the oven, while others simply finish cooking it on the stovetop. We're using the stovetop method here, so the entire dish is cooked from start to finish without having to use the oven.

You don't even have to peel the garlic, but by doing so this will allow the guests to eat the entire dish without having to peel the garlic cloves themselves. And, trust me, the garlic is truly the centerpiece of this dish – perhaps even more than the chicken itself. When people first hear that this dish is made with forty cloves of garlic, their first reaction is to shy away. Won't all of that garlic give this dish an incredibly strong and overbearing garlic taste? This is where the magic happens: no, it doesn't taste like incredibly strong garlic. As the garlic cooks, the flavor becomes mellow and even sweet, while the garlic cloves themselves become so soft, they can be mashed with a fork or spread on a piece of bread like butter. And that's one of the best ways to enjoy the garlic: spread the garlic onto buttered bread, and you'll have a garlic bread like you've never had before.

As for the dish itself…

Pans needed: A large cast iron skillet or dutch oven, with a lid. If you don't have an iron lid that fits over your pan, you can use a glass lid or another lid for a pot or pan. A bowl or plate to dredge the chicken with flour.

Of course, the fun part in preparing this dish is peeling all those garlic cloves… means peeling 42 cloves of garlic by hand. There's a popular Internet trick that says to place your garlic cloves, with the skins on, in a covered container and shake them vigorously to peel them. When I tried this, I had maybe three or four peeled garlic cloves and nearly fifty unpeeled cloves left in the bowl. So, this meant the garlic cloves needed to be peeled by hand, one at a time. It actually didn't take too long.

And now it's time to bring out a heavy cast iron skillet, preferably a pan between 10 and 12 inches in diameter – and make sure you have a lid that fits on this pan! This way the entire dish can be prepared on the stovetop. Place the pan on the stovetop (without the lid) and heat it at medium to get it good and hot, while we prepare the chicken.

Most versions of this recipe say to use chicken thighs, and I do love dark meat. But I had boneless skinless chicken breasts on hand, so we dredged them in flour to create a coating. This works fine with both dark and white meat. Sprinkle on salt and pepper…and usually I'd also add garlic powder, but this recipe already has plenty of garlic. Be sure to generously season both sides of the chicken.

At this point, prepare the sauce by adding some brandy to the hot pan. Add 1 cup chicken broth to the pan and stir it in. Now, we add all of the garlic cloves. Stir the garlic in the liquid, and cook it only for about a minute or two, until it's only beginning to brown. It's important not to burn the garlic. After only one to two minutes, when the garlic is browning, add the chicken pieces back into the pan. Top the chicken with some sprigs of fresh thyme, or sprinkle on half a teaspoon of dried thyme. Cover the pan to braise the chicken. Turn the stovetop heat to about low-medium, and let the chicken simmer in the pan for 30 minutes. Do not uncover the pan until after 30 minutes have passed.

After 30 minutes, remove the chicken from the pan and prepare the garlic sauce. Turn the heat back up to medium, and mix in 3 tablespoons cream into the pan juices. Add another 1/4 cup of brandy, or you can use white wine if you prefer. Cover the pan for a five minutes to get the sauce good and hot. After five minutes, uncover the pan and add 1 cup of milk. Sprinkle some more salt and pepper, then stir it to reduce the sauce and also to keep the garlic from burning. This only takes a few minutes.

You can tell the garlic is ready when it's so soft and tender, you can squish it with a fork. That means we're done, and our chicken with forty-two cloves of garlic is ready to serve.