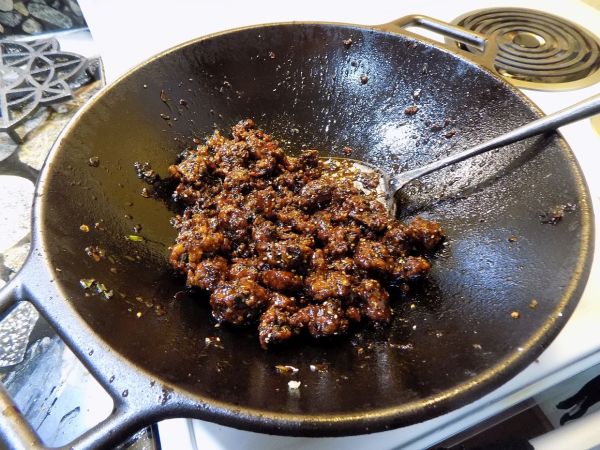 Here's an attempt to re-create a popular dish seen in most so-called Chinese restaurants, even though it's actually American in origin. That would be General Tso's chicken, which is chicken stir fried, then boiled in a tasty sauce with some hot spices and a little bit of orange. Like many so-called Chinese take out dishes, this actually does not come from China, and even though General Tso really did exist, folks over in the Hunan area of China have rarely heard of this dish, and no one seems to know why it's named after General Tso. But of course it's very tasty, it's a change from the usual chicken stir fry, and it isn't hard to make at all, especially when using a cast iron wok. It has the slightly hot and savory-sweet taste you get from this dish, and for a cost less than your typical Chinese take-out, we have a big dish of stir fried chicken that might even receive approval from General Tso…if he'd ever heard of this dish. So here's a shout out to American urban legends, along with Mongolian beef and broccoli that doesn't come from Mongolia, and Chinese fortune cookies that actually come from the United States. But the important part is it's very tasty and delicious, and it's a lot of fun to make.

Dishes needed: A wok for stir frying. One large bowl to marinate the chicken. Three bowls or dishes for stir fry preparations. Metal bowl to reserve the hot fried chicken.

A crucial step to follow for preparing a Chinese style stir fry: Velveting - Ancient Chinese Stir Frying Secret. Be sure to read this before preparing this chicken dish.

Cut chicken into cubes. In a large bowl, Whisk egg white, vinegar, cornstarch, and salt together in a bowl until marinade is smooth. Add chicken pieces; cover with plastic wrap and marinate in the refrigerator, about 30 minutes.

Mince ginger and garlic. Chop green onion, zest orange. If you are serving additional side dishes, such as broccoli or mushrooms, chop them at this time.

When the water is boiling, remove the chicken pieces from the refrigerator and blanch them: Add about 1/3 of the chicken to the boiling water and gently stir it for 30 seconds, breaking up the meat as you stir so that it isn't clumped together. Remove from the water with a slotted spoon, and place into a colander. Repeat with the rest of the chicken, blanching a second and third batch in the oil, then draining in the colander.

As the oven is heating, beat the egg in a large mixing bowl. Add the chicken cubes; sprinkle with salt, 1 teaspoon sugar, and white pepper; mix well.

Prepare bowls for the stir fry:

When ready, turn stovetop burner to high setting (electric stove: 3/4 high). Remove the hot wok from the oven and place on the hot burner.

Add 2 tablespoons vegetable oil to the hot wok, and wait about 30 seconds for the oil to become hot.

Fry chicken in batches, 6 minutes per batch, until coating is golden. Remove and let cool. Then, return the chicken to the wok and stir fry a second time. Remote the cooked chicken and reserve it in a metal bowl.

If you are frying other vegetables at this time, such as broccoli and mushrooms, now is the time to fry them. Remove the fried vegetables so they can be served with the chicken.

Heat 2 tablespoons vegetable oil in a wok or large skillet over high heat. Stir in the first bowl, containing green onion, ginger, garlic, red pepper flakes, and orange zest. Cook and stir a minute or two until the garlic has turned golden. Add second bowl with sugar, and stir it together into a thick roux or mash. Add the third bowl with the the chicken broth, vinegar, soy sauce, sesame oil, and peanut oil, and stir it all together. Bring to a boil, which will take less than a minute.