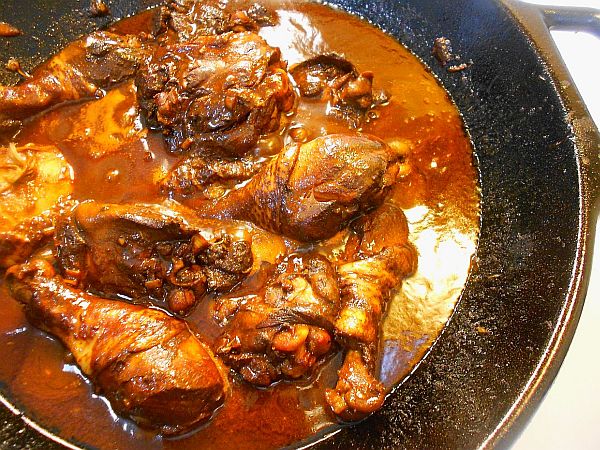 Jamaican dishes use the types of seasonings you usually see in traditional British Christmas dishes, including allspice, nutmeg, lots of cinnamon, anise, cloves, and other spices…but there's one particular spice native to the Carribean area that's unique. This, of course, is scotch bonnet peppers, one of the hottest and sweetest hot peppers in the world. I'm not a fan of heavily spiced dishes that destroy your taste buds, and Jamaican jerk seasoning is about the limits of my spice tolerance. But this is certainly worth taking my spice tolerance to the limit, because Jamaican jerk chicken (or any meat made with this seasoning) is delicious.

This dish took a bit of a left turn, and rather than being done on a grill, it ended up being cooked on the stovetop in a cast iron wok. The result was a tender and very tasty chicken simmered in a thick and spicy sauce. I like how this turned out, and I also liked that it was done entirely on the stovetop.

Pans needed: Cast iron wok or dutch oven. Large dish for marinating the chicken in the refrigerator, and one bowl for mixing the spices.

At least two to three hours before cooking, prepare the jerk seasoning. Chop onions, scallions, garlic, ginger and scotch bonnet peppers. Mix in additional spices: five spice powder, allspice, thyme, nutmeg, salt, pepper, brown sugar, soy sauce, vinegar, lime juice, olive oil. Add chicken pieces to a large bowl or dish, and mix in the jerk seasoning. Stir everything until the chicken is coated. Cover the dish, and let the chicken marinate in the refrigerator for at least two to three hours. If there's time, it's better for the chicken to marinate overnight or even a full day before cooking.

Heat up a large cast iron dutch oven or wok, over medium heat for about ten minutes. When the pan is wok, add oil to the pan, and sear the chicken on all sides. We don't have to thoroughly cook the chicken here, just enough to brown the outside of the chicken pieces. Cover the pot, and let the chicken braise in its own steam for five minutes.

Add tomato paste, and scrape any extra marinade from the dish into the cast iron pan. Add enough chicken broth to mostly cover the chicken. Cover the iron pot, turn the stovetop heat down to medium-low, and let the chicken stew in the covered pot for twenty-five minutes.

Uncover the pot, mix everything together. Let the pot simmer uncovered for another fifteen minutes, to reduce and thicken the sauce. 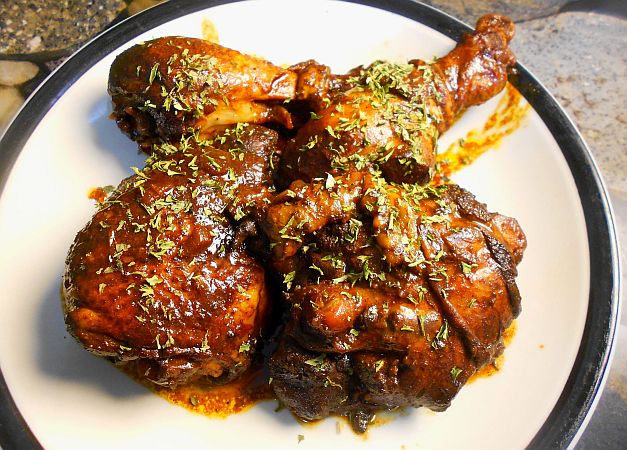