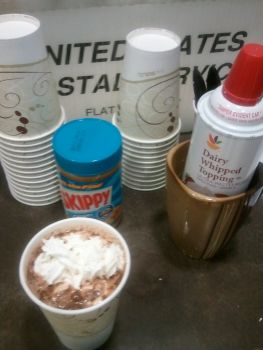 Many work places offer those cheap Swiss Miss instant cocoa packets to their workers, to go along with the cheap coffee and teabags. With the fall chill settling in now, I had an idea to improve that cheap cocoa and make it something more palatable. During my lunch break, I picked up some creamy peanut butter and whipped cream at Family Dollar, and gave it a try. It worked well enough for me to pass the recipe on. I left the peanut butter at the coffee area, with written instructions so that anyone could try it:

Because this encourages the use of two packets of cheap cocoa mix instead of one, it should cause the hot chocolate to be used twice as fast as usual. Don't be surprised if this recipe is banned in the workplace, as it actually encourages your fellow drones to take advantage of a free "privilege" offered to you by the corporate powers that be. 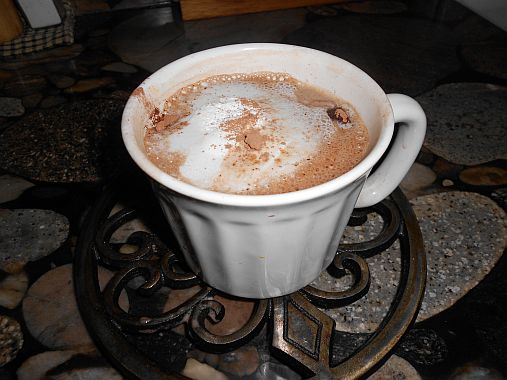 For a much richer serving of peanut butter hot chocolate at home, you can make it as follows:

Boil the water in a saucepan; that's not a lot of water, so keep an eye on it until it boils, it will only take a few minutes. To the boiling water, stir in cocoa, sugar and a pinch of salt. Bring this mixture to an easy boil while you stir. Simmer and stir for about 2 minutes. Watch that it doesn't scorch. Stir in 3 1/2 cups of milk and heat until very hot, but do not boil! Add peanut butter, and continue to stir until the peanut butter is completely dissolved in the hot cocoa. Remove from heat and add vanilla. Divide between 4 mugs. Add the cream to the mugs of cocoa to cool it to drinking temperature. (For an adults-only touch of decadence, you can add brandy for an extra kick.)