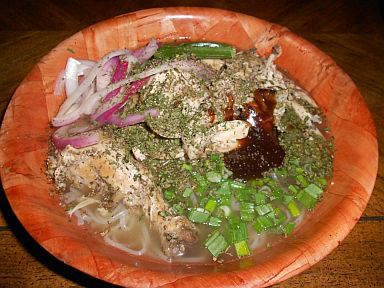 It's pronounced "fuh." It's spelled "phở" but you speak it as "fuh." No kidding. Don't just take my word for it, find out for yourself.

Vietnam's wonderfully delicious phở noodle soup has its hardcore perfectionists. These are the ones who insist on following the exact recipe to the last letter, and who bristle at the thought of any deviations from the correct method. To these purists, the only phở is phở bo, or phở made with beef. There are many other kinds of phở, but only phở bo is the "true" phở. Nonetheless, phở ga – phở made with chicken instead of beef – is nearly as popular as phở bo. It's also just as delicious, and for any fan of cooked chicken or chicken noodle soup, phở ga is a must-have!

In some ways, phở ga is easier to prepare than phở bo. It requires a whole chicken (or chicken parts) rather than beef bones, and of course you can pick up a chicken at any supermarket. Instead of simmering beef bones for three hours, you only have to simmer the chicken for about half the amount of time as the beef. Other than the chicken, the basic ingredients for phở ga are nearly the same as for phở bo. Interestingly, many versions of the phở ga recipe call for heating the dry spices in a skillet or saucepan to bring out their flavor, along with the onions and ginger; this step isn't seen in most phở bo recipes. 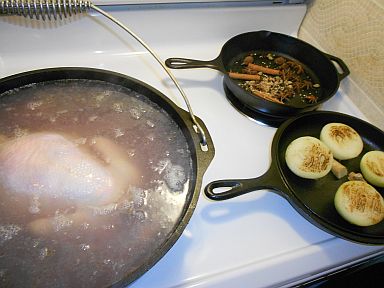 Garnishings for phở – to be added upon serving the finished soup. 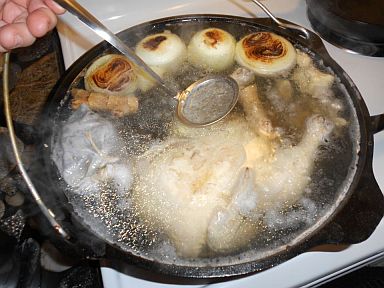 Skimming fat from the surface of the broth as it simmers, using a fine mesh strainer.

In a skillet or saute pan, take the halves of onion and ginger and char them: heat them in the pan until just a little black char shows on the surface. The surface color will become slightly darker. Remove the onions and ginger from the heat, and place aside.

Heat up the dry spices for the spice packet (star anise, cloves, cinnamon stick, cardamom pod, coriander, fennel seed, peppercorns) in the skillet until the spices become aromatic and you can smell the aroma. Place the spices in a bowl (remember, they're hot) and prepare your spice packet. A traditional spice packet consists of a small cheesecloth bag or pouch, with the spices added and tied shut. If you can't get a cheesecloth to wrap up your spice packet, use one or more stainless steel tea diffusers (on sale at most supermarkets or other kitchen suppliers).

Different phở ga recipes call for the whole chicken to be placed into the pot, while others say to chop or break the chicken into parts. If you're using extra chicken bones, chop those into pieces (or at least in half) to expose the marrow. The bone marrow will provide a richer broth.

Fill the pot with water and add your chicken (and extra chicken bones if you're using them). Add the onions and ginger to the water, and add your spice packet(s). Heat the pot until the water is boiling, and boil the chicken for ten minutes. Drain the stockpot (don't throw out the chicken!), rinse the chicken and bones clean, and rinse out the stockpot. (This will remove much of the fat from the soup.) Put the chicken and bones back into the stockpot, add six quarts of water, and bring to a boil. Add in the charred onions and ginger, garlic, salt, and the phở spice packet. Lower the heat to a low boil, and simmer the soup for 45 to 50 minutes.

Traditional phở cooking uses one stockpot instead of two. As the phở broth boils, fat and impurities will cause a thick foam to form on the surface of the bubbling liquid. This fat needs to be removed to make the broth clear, thin, and tasty. To strain the fat from the water using this method, a small fine strainer with a handle is used to skim the fat from the surface of the broth, over and over, for as long as the broth is cooking.

After 45 to 50 minutes, remove the chicken (but not the bones), and place aside for serving. Continue to simmer the broth for one hour, skimming any scum from the top. After one hour, when the broth is ready to serve, mix in sugar and fish sauce. If you're using rock sugar, stir until the sugar is dissolved.

Prepare the phở garnishings, so that your guests can pick and choose whichever ones they want to add to their soup. Red onion slices are popular with phở ga, and they should be prepared about one hour before the phở is finished: peel red onions and slice them into strips. Place the onion strips into a bowl and add 1 cup of vinegar. Mix the onions in the vinegar, then set the bowl aside for the onions to soak for one hour, while your soup continues to cook.

If you are using a whole chicken, use tongs and turn the chicken over after 45 minutes. This will ensure both sides of the chicken are thoroughly cooked.

Prepare the rice noodles when the broth is nearly finished. Rice noodles will congeal very quickly, so you should wait until you are almost ready to serve the phở. Place the dry noodles in a large bowl, and pour enough boiling water over them to cover the noodles. After only a couple of minutes soaking in the hot water, the noodles will be ready to add to your guests' bowls. Serve the rice noodles directly from the water to the soup bowls; you don't have to strain them.

Fill the bowls of noodles about half full of phở broth. (The meat and garnishings will fill up the rest of the bowls!)

Depending on your preference, you can remove the meat from the chicken bones and place it into the bowls of soup on top of the rice noodles; or you can simply separate the chicken into parts, leave the bones in, and place the whole pieces of chicken into the bowls. Fill the bowls of noodles about three-quarters full of phở broth, so that the meat and noodles are covered. Place your garnishings in groups alongside the chicken, on top of the soup: picked onion strips, basil, cilantro, and scallions. Serve the bowls and allow your guests to add all other garnishings at their leisure.

March 10, 2012: Thanks to the Deep Fried King, I've gotten it into my head to have another go at making phở soup today – chicken phở this time, because I have a whole chicken to cook. He posted a video on how he makes phở (it's pronounced "fuh"), and now I've been struck with the urge to have some soup myself. (One thing, dude – if you're looking for quick and easy substitutes for your phở, you should pick up some Oriental five-spice combination; this contains all of the typical ingredients added to most Oriental foods, including phở. Oriental five spice can be found in most stores that sell spice combinations.) No two phở recipes are alike, even using different ingredients, so I cobbled together a couple of recipes to use as references. I'll be making phở ga, the chicken noodle soup.

3:30 PM: First step in making chicken phở (phở ga): boil the chicken, char onions and ginger, and heat up spices until they are aromatic. I posted this to Reddit, and of course they're asking for pictures.

4:30 PM: Skimming fat from the surface of the broth as it simmers. The fine mesh strainer only cost a couple of bucks; there's nothing especially expensive about this entire recipe. Phở is not only tasty, it's very affordable.

5:00 PM: Hmm. 45 minutes to go, halfway done simmering the chicken. I think I did right, and it's worth mentioning: I'm using a whole chicken, plus extra bones to add marrow to the broth. After rising out the chicken and putting it back in the pot, I'd placed it breast side down and simmered it in that position. At the halfway point, I figured it would be a good idea to turn the chicken over to breast side up, and let it finish simmering in that manner.

5:30 PM: Time to take out the chicken and prepare the phở.

6:00 PM: The stock pot for boiling the rice noodles came to a roiling boil just as the chicken was finished. I lifted the chicken out and into a colander to drain, added the rice noodles to the pot, turned off the stovetop with the broth, and covered the pot. Here's one of the best parts of making broth or stew in a cast iron pot: the heavy metal of the pot would keep the broth hot for a long time. The thin rice noodles turned nearly invisible and had to be stirred and watched constantly; they were done after only a few minutes in the boiling water. I drained them and served them from the colander to the soup bowl, and poured broth over them immediately.

From there it was just a matter of adding the ingredients. The chicken was so thoroughly cooked, it came apart as I used the tongs to tear off different parts. I consider that a success.

Now, anyone who has read this group will know that I am only a beginning cook; what's more, this was my very first time making phở ga. I've made phở bo a couple of times before, but neither of them were very satisfactory. Also, I didn't have fresh basil leaves or cilantro. So, if you're kind enough to take all of this into consideration:

With the chicken resting upon the noodles and in the broth, served with pickled onions, scallions, dried basil and cilantro, a shot of hoisin sauce, and sprinkled with cracked pepper…here is my phở ga.