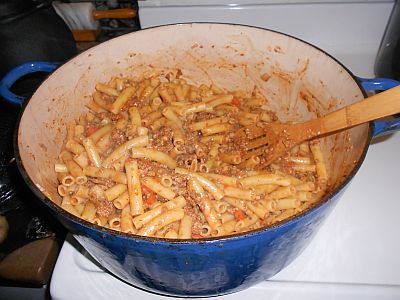 This traditional Italian fare (pronounced boll-a-NEEZ-eh) is considered one of the finest of all Italian meat and pasta dishes – but it requires a lot of preparation.

First of all, this ragu has nothing whatsoever to do with the cheap but popular jarred spaghetti sauce! This also differs from my own family recipe (Nana Pacitto's Homemade Pasta Sauce), in that my family comes from Sicily and not Bologna. The exact area of origin is important in Italian cuisine, at least politically: true balsamic vinegar comes only from Modena, for instance; while true bolognese only comes from Bologna. In order to make this a true Bolognese, it has to be prepared in a fashion that would be acceptable in the Bologna region of Italy.

Also, bolognese should never be served with spaghetti, as that's considered an insult. It has to be served with a flat tagliatelle pasta, with pappardelle and fettucine being secondary choices; or sometimes a tubed pasta such as ziti or penne. Lesser Bolognese dishes are often called spaghetti alla bolognese, but this dish never actually existed in Bologna.

When I prepared and served this dish for the first time, we were all very pleased by the refreshing change of pace it provided: the meat-heavy sauce actually had more of a touch of sweetness than we'd expected. If you prepare this dish (or order it at a restaurant) expecting it to be like any other "spaghetti sauce" – overflowing with tomatoes – you are likely to be disappointed. Bolognese takes its flavor from the meat, and the tomatoes are barely present in the dish at all. 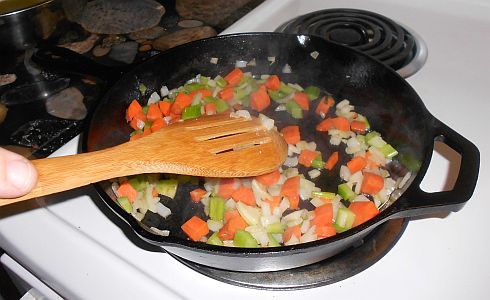 Cut or dice vegetables into small pieces and combine them in a bowl.

In a large enameled pot, combine beef, pork, veal and pancetta and sauté them on medium-high heat until browned – not thoroughly cooked, just browned – in order to release the grease from the meat. Reserve (drain) the grease into a metal or glass container. Turn your stovetop heat down to low, to keep the meat warm as you then prepare the vegetables.

Heat up a cast iron skillet over medium heat, then add olive oil. Heat the olive oil for one minute before adding vegetables. Sauté onion, celery and carrots until soft. Add minced garlic, plus 2 tablespoons of the reserved grease from the meat, and stir it in. (Set the remaining grease aside for use in other meals.) Once it has all mixed in, add the vegetables to the large pot and stir it all into the meat.

Turn the heat on the cooking pot up to medium. Add beef broth, wine, and balsamic. Bring to a low boil, then turn the heat down to medium-low and simmer the mixture about 15 minutes, uncovered, stirring regularly, reducing the liquid until the meat is exposed and it is no longer a stew.

Stir in tomatoes (sauce and paste). Add salt, pepper, oregano and bay leaves to the sauce. Stir and mix everything together. Cover pot, and and simmer 60 minutes. Stir the sauce once every ten to fifteen minutes.

After half an hour, when there are about thirty minutes left for the sauce, it is time to prepare the pasta. Fill your stock pot with water and boil it over high heat. Add plenty of salt to the water, at least one tablespoon for every two quarts of water (so that an 8-quart pot uses 4 tablespoons of salt). Do not add oil to the water; you'll want your pasta to stick to the sauce. Bring the water to a heavy roiling boil, then stir in pasta. Cook pasta until al dente (just soft enough to eat without being chewy).

After all this time cooking the sauce, we're still not done yet! Turn off the heat, and add cream and nutmeg. Mix it all in. (Remove the bay leaves from the sauce.) Drain the pasta in a colander. Mix the pasta directly from the colander into the sauce, and stir it all in.